I'm not sure how much money Sprint spent on this but I'm sure whatever the amount was, they overpaid. In an effort to promote the recently launched Samsung Epic 4G handset and the new Media Hub, the company shot a series of short movies, all with the word "Epic" in the titles. 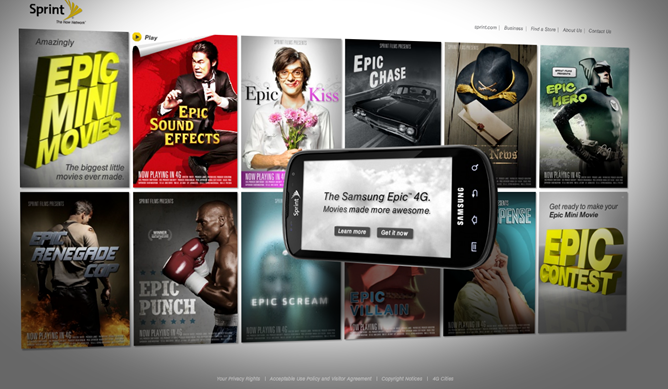 The website layout, production quality, and presentation are all top notch. What is not top notch, however, is the most important part - the content. Plain and simple, it sucks. It is mostly the opposite of I would call funny or entertaining, ends way too abruptly (yeah, they really are short films), and makes no sense in the scope of effectively promoting both the phone and the new media service.

But why trust my word? Form your own opinion by watching one of these epic failures:

Sprint and its agency Goodby, Silverstein & Partners developed several unique Epic Mini Movies across several areas, such as the Epic Scream, Epic Punch, Epic News, Epic Suspense, Epic Kiss, Epic Chase, Epic Sound Effects, Epic News and Epic Villain. These moments appear throughout the advertising campaign across several formats, including TV, print, online and out of home. The movies were designed with the dual purpose of showing how the device can deliver a cinema-like experience so users can download and watch movies on the go at 4G speeds, and they provide inspiration for user-generated content. To view the Epic Mini Movies go to www.sprint.com/epic.

In addition to the entertainment capabilities of the smartphone, the campaign also highlights the unique combination of other features of Samsung Epic 4G, such as the ability to download content over the Sprint 3G or 4G networks without being tethered to Wi-Fi®, front and rear-facing cameras, mobile hotspot which allows for up to five Wi-Fi enabled devices to connect to the Sprint 3G or 4G networks via the device, the slide-out QWERTY keyboard, and the smartphone’s Super AMOLED™ touch-screen for a viewing experience that is second to none.

“This campaign is designed to engage consumers and highlight the entertainment capabilities of Samsung Epic 4G and how using Samsung Media Hub on the Sprint 4G network allows for faster downloads than any other carrier can provide,” said Mike Goff, Sprint vice president-Corporate Marketing. “We’re inviting our customers to participate and create content that people will want to share. With Samsung Epic 4G’s beautiful display and an enhanced entertainment experience thanks to Sprint 4G, the campaign highlights why it is the ultimate phone for high-quality entertainment on the go.”

Samsung Epic 4G from Sprint is the first Samsung Galaxy S™ smartphone with access to Samsung Media Hub, an easy-to-use mobile video store that offers an extensive library of acclaimed films and TV programming that launched recently. Samsung Media Hub will be included as part of the Sprint campaign in print and online ads. With Samsung Media Hub, TV and movie aficionados can access their favorite titles and download them in a matter of minutes or stream them for immediate viewing on the device using the Sprint turbo-charged 4G network. A robust collection of movie and TV show titles are available on Media Hub with Samsung adding more first-rate content providers to the content library in the future.

Adding Media Hub content to Samsung Epic 4G is quick and easy. Simply scan through the Media Hub library on the phone and select the movies and TV titles to download. Movies are available for rental for $2.99 to $3.99 or purchase for $9.99 to $17.99. TV episodes, including next-day programming, can be purchased for as low as $1.99. The price range for renting and buying content will depend on whether the title is a new release or older programming. In addition, full seasons of TV shows are available to buy from Media Hub. Prices will depend on the number of episodes included in the season and how recently the programming originally appeared for broadcast (excludes taxes).

Samsung Epic 4G is America’s first 4G-capable phone with a full QWERTY keyboard and brilliant Super AMOLED touch-screen, bringing customers an all-in-one device for staying connected, getting work done and enjoying the latest in entertainment while on-the-go. Phones are available at all Sprint retail channels, including Sprint.com, Telesales (1-800-SPRINT1) and national retail partners, RadioShack, Best Buy and Walmart. It costs $249.99 with a new line or eligible upgrade, and two-year service agreement, after a $100 mail-in rebate (excludes taxes).

In order to provide the best experience, Samsung Epic 4G will use Sprint’s industry-leading Everything Data or Business Advantage Messaging and Data plans, which include unlimited Web, texting and calling on the Nationwide Sprint Network to every mobile in America with Any Mobile, AnytimeSM. Everything Data plans start at $69.99 per month. A $10 per month required Premium Data add-on will allow customers to take advantage of a richer data experience than ever before. For more information about Sprint’s Everything plans go to www.sprint.com/unlimited.

Powered by the Android™ 2.1 operating system, Samsung Epic 4G is part of a new breed of Samsung smartphones offering the best in screen, speed and content quality for a premium user experience, and offers a fully integrated multimedia, messaging and social networking experience. Samsung Epic 4G’s display supports a series of advanced touch-screen gestures, including multi-touch pinch, long tap and zoom and vertical and horizontal swiping.

Samsung Epic 4G is the only 4G smartphone to offer three fast and easy ways to enter text onto the device – a slide-out full QWERTY keyboard, virtual keyboard, and Swype technology, which allows users to input text faster and more intuitively with one continuous finger motion across the virtual keyboard.

Customers interested in Sprint can take advantage of the new Sprint Free Guarantee, the most robust satisfaction guarantee in the wireless industry, allowing customers to try a new line of service with Sprint for 30 days. If they aren’t completely satisfied with Sprint during that period, they can cancel service and return their device to be reimbursed for the device purchase and activation fee, get the early termination fee waived, get a full refund for monthly service plan recurring charges incurred and get all associated taxes and fees waived. In addition, Sprint will waive the restocking fee for new customer exchanges as part of this policy. Refund excludes usage not included in the plan, premium content, third-party billing and international charges.

Problems Updating System Apps With CyanogenMod 6 On Your Nexus One? Download The App Update Pack