If you haven't seen any demos from the recent HTC press conference showcasing the company's new Fast Boot technology available on the newly announced Desire Z and Desire HD handsets, you should stop everything you're doing and watch them immediately:

The new Fast Boot allows for boot-up times as low as 5 seconds. According to HTC, Desire HD and Z

... include the new HTC Fast Boot that enables people to quickly make a call or check emails by shortening the time taken to complete the power-up sequence.

Even Paul O'Brien, a genius Android ROM developer, was impressed: 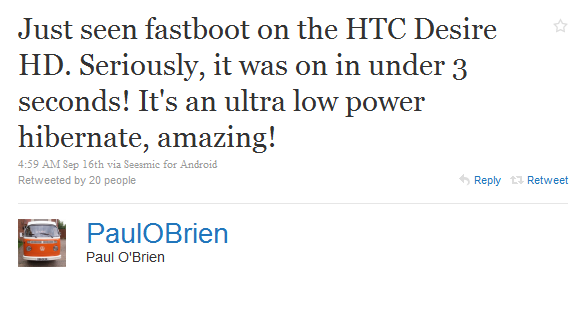 How Is This Possible?

Are boots this fast even possible? The HTC logo doesn't even go through its full animation cycle, and the phone is ready to rock'n'roll. The videos, though, aren't lying. Magic, trickery, or a bit of both?

What HTC omitted was that the new Fast Boot was not possible during a "cold boot", i.e. after pulling the battery and plugging it back in. In that case, a normal boot-up of about 30s-1min we are all used to occurs. A software reboot, however, results in Fast Boot kicking in, and the phones comes back from the dead in a matter of seconds.

As Paul O'Brien mentioned already, Fast Boot is nothing more than a very low-power hibernation or some sort of a sleep mode. We don't have details on how exactly it works, and whether a software reboot restores the phone to some sort of a default state or simply wakes up whatever state was put to sleep. Therefore, we don't currently know what happens if you reboot due to a misbehaving program or a hung GPS, or anything that is usually fixed by the "turning it off and on again".

It is also not clear what the minimum battery level for Fast Boot to operate reliably needs to be and just what kind of effect it has on the power drain, if any. If Android shuts the phone down due to low battery, will Fast Boot kick in after a recharge? Only time and playtime with Fast boot enabled devices will show.

Finally, HTC didn't specify whether the new Fast Boot will be available on older devices. I sure hope it will be.

The new Fast Boot will be very useful when turning the phone on after a plane trip or, depending on how exactly it works, even simply rebooting. It will not save you time, however, if you are switching batteries, which hopefully shouldn't happen too often.

We will keep you up-to-date on any new details about this technology as they come in. If you find something out before that though, don't hesitate to let everyone know in the comments or by emailing tips [at] androidpolice [dot] com.