Samsung also took the occasion to announce the launch of their new website, which went live the day of the event. 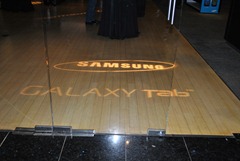 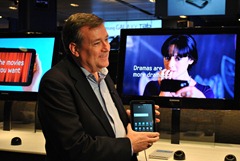 Samsung CSO Omar Khan wasted no time getting to the main point of the event - the US introduction of the Galaxy Tab. The first glimpse we got of the device was of Omar pulling it out of his coat pocket in order to show us all its size. With its seven inch display, the Galaxy Tab is a bit smaller than what it's made to directly compete with (a hardcover book - what did you think they were trying to compete with, the iPad?).

Samsung's goal with the device seems to have been not just portability, but "pocketability", and it's certainly closer to both of these than Apple's iPad, given the smaller size. Omar commented that application portability from smaller devices was also a factor in the decision to go with a seven-inch form factor. During my hands-on session with the Tab (more on that later), I personally found the size to be "just right". 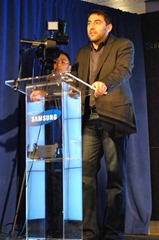 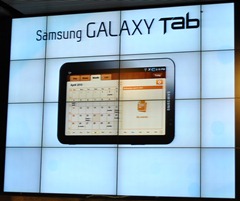 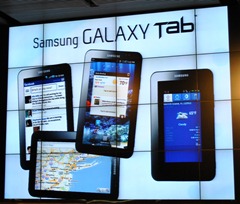 So without further ado, here are the specs for the device:

A WiFi only model will be available, albeit sometime after the launch of the 3G/WiFi combination versions. 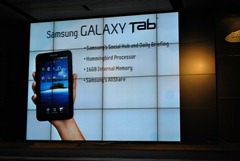 The most surprising announcement isn't exactly a feature, but it certainly is a big deal - the 3G/WiFi variant will be available on all four major US carriers - Verizon, AT&T, T-Mobile and Sprint (no 4G on Sprint). Asked during the Q&A portion of the event of carrier customizations for the device, Samsung stated that carriers will "of course" be free to customize the software on the Tab (which means unwanted junkware for you and me). Since data service is (mostly) similar between all of the carriers (voice service seems to be customers' most common complaint), choosing which carrier to go with for your Galaxy Tab might just depend on the amount of junk put on each specific carrier variation.

Unfortunately Samsung stopped short of releasing any details of pricing or official availability dates, leaving this privilege to the carriers. Samsung said that the device would be available by holiday shopping season, and that carriers would be free to subsidize the price in exchange for contractual obligations from the consumer. It's understandable that Samsung couldn't announce this information, as it's really up to the carriers to decide. I asked around, and all of the Samsung employees in attendance refused to even speculate on the possible prices. Don't fret however - I'll speculate.

In order to compete with iPad, Samsung needs to offer cheaper versions that aren't subsidized by a carrier, and that'll likely be where the WiFi-only version comes in. I'd put a WiFi-only version coming in quite a bit cheaper than an iPad, somewhere in the $300 to $400 range. As far as carrier-subsidized 3G/WiFi versions, I expect to see carriers selling them at the $199 price point which is popular with high-end Android devices.

Adobe's Chief Technology Officer Kevin Lynch (who happens to look in person a bit like famous philanthropist Bill Gates) was in attendance to demonstrate some of the Flash functionality on the tablet. The experience is quite similar to what you're already used to on your Froyo-powered handheld device, but with a bigger screen. 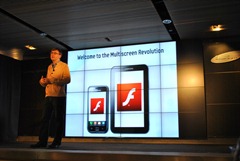 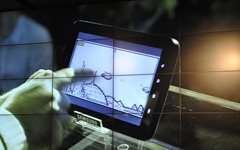 The key feature for Samsung seems to be the video chat (using Qik). While it may not have the same cute name as Apple's FaceTime, the experience is mostly the same, if not enhanced slightly by the larger resolution front-facing camera. You get a preview of yourself in the corner of the screen, and a full-screen video feed of the person you're talking to. According to Qik, "Samsung Galaxy Tab users can use Qik for two-way live video conversations over WiFi or 3G." 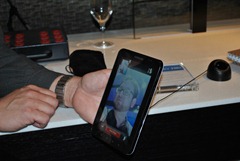 Samsung announced several key accessories for the Galaxy Tab, including a full keyboard and a car dock. The keyboard looks a lot like the one available for the iPad. I'm personally on the fence about the car dock, as this is a larger device which I don't quite feel comfortable taking up so much visible area while suction cupped to my windshield. 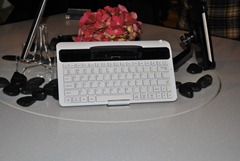 The next key announcement for Samsung was their new Media Hub. Though it wasn't much of a surprise as it was clear from the invitation that it would be announced, the service itself seems quite a bit more promising than I expected. Rather than developing a direct competitor to Apple's iTunes store or merely pushing media to your device from other content providers such as Amazon, Samsung has secured deals with various media outlets to bring to Media Hub enabled devices not just movies, but next-day television shows. That's right - Media Hub could be thought of as more of a Hulu competitor than an iTunes competitor. Presently, Samsung has secured deals with NBC, MTV Networks, Warner Brothers and Universal Studios, so you'll finally be able to watch Jersey Shore on your Media Hub enabled device the day after it airs, without having to wait for the special edition DVD box set.

Michael Schreiber, Vice President of Business Development at NBC Universal (and person at the event with the longest job title) was on hand to give us a sneak preview of a new show premiering September 20th on NBC called "The Event" (stylized “THE EV∃NT”, because shows like "NUMB3RS" do so well with US television audiences). The show is to star Jason Ritter, and the preview was a lot like the popular art-house film Snakes on a Plane, only without any snakes. Jason Ritter had somehow snuck past airport security with a gun, and a United States Air Marshal was pointing another gun at him telling to put it down. 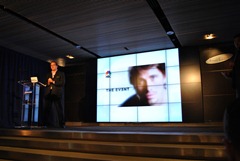 Media Hub will allow users to share purchased content between up to five devices, meaning, of course, that the content will be using some sort of Digital Rights Management. Pricing for the content itself is yet to be announced and yet again was strictly avoided subject. The only rehearsed phrase we heard was that it would be in the same range as other similar services. 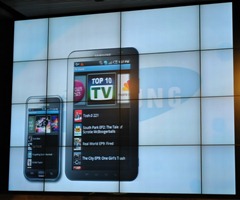 Hands-On With The Galaxy Tab

After everybody was done talking, we were all invited for a hands-on session with Samsung's new tablet device. The version available for play testing was international rather than a carrier specific version for the United States.

My impression? It's nice. I'd buy one. I'm a big fan of the seven inch form factor, it seems just the right size to me - it's big enough without being too clunky to carry around. It has Android 2.2 with the standard TouchWiz interface that we're used to now, with the only differences being some tweaking for portrait mode viewing on the larger screen (the e-mail application for instance has a multi-pane view similar to the iPad). The device felt snappy with no real lag to speak of, thanks to the 1GHz Hummingbird processor. It's mostly what you're used to on a normal handheld Android device, just bigger. Typing using the on-screen keyboard was quite a nice experience, something owed to the "not too big and not too small" physical size of the device. The video chat software performed well.

The only small issue we all encountered with the Tab was that after only about an hour or two of everybody in attendance playing with them, the batteries were dead on almost all of the demo units.  Battery life seems to be a long standing complaint with Android users, but I’ll chalk it up to the video chat software (which is a battery drain because of the camera) being used extensively on all of them. 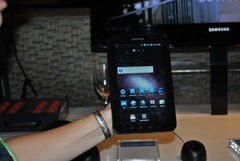 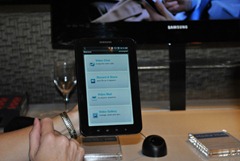 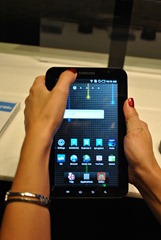 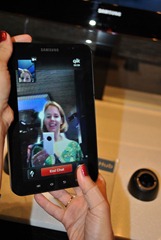 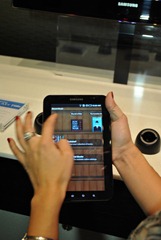 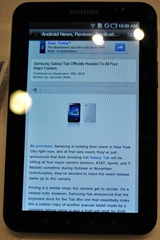 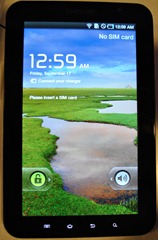 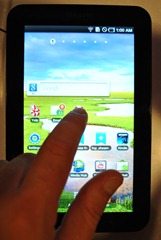 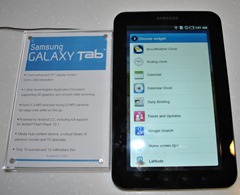 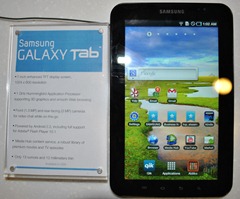 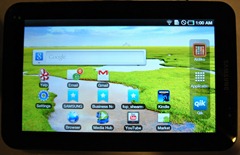 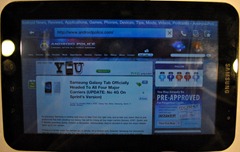 CyanogenMod 6 Achieves A New Milestone... Motorola Milestone That Is

Droid Incredible Gets Super LCD Early - New DIncs With Froyo On-Board Already Up For Sale At ...