TmoNews has scored what could be a leaked internal document on the upcoming T-Mobile myTouch HD. I want to say up front (although this is purely my own opinion) that I think it could be fake. I'm not convinced of that, but I'm certainly not convinced it's real, either. That said, here's what it provides for specs:

Other features: the front facing camera can obviously be used for video chat over 3G, HSPA+, and Wi-Fi. Video chatting can be done phone to phone with Qik or phone to PC with Qik and Yahoo Messenger. Also, there must be some sort of HDMI out, as one of the features touted is "Screen Share" which allows you to broadcast HD content to an HDTV. Finally, there's a "Genius Button" which allows you to use voice commands to text while driving - the phone reads the text aloud, and the phone will speech-to-text your reply. Nifty.

Now, with the contents of the document laid out, here's why I think it could be fake:

First, I doubt they'd flat out call it "America's Largest 4G Network" - from what I've seen, they always say something like "4G speeds," probably for legal purposes. And second - and more importantly to me - it reads "1 GHz Dual Processor" which doesn't really make any sense. Presumably that means it's dual-core, but there's a pretty big difference between dual-core and dual processor (mainly, the number of processors.) 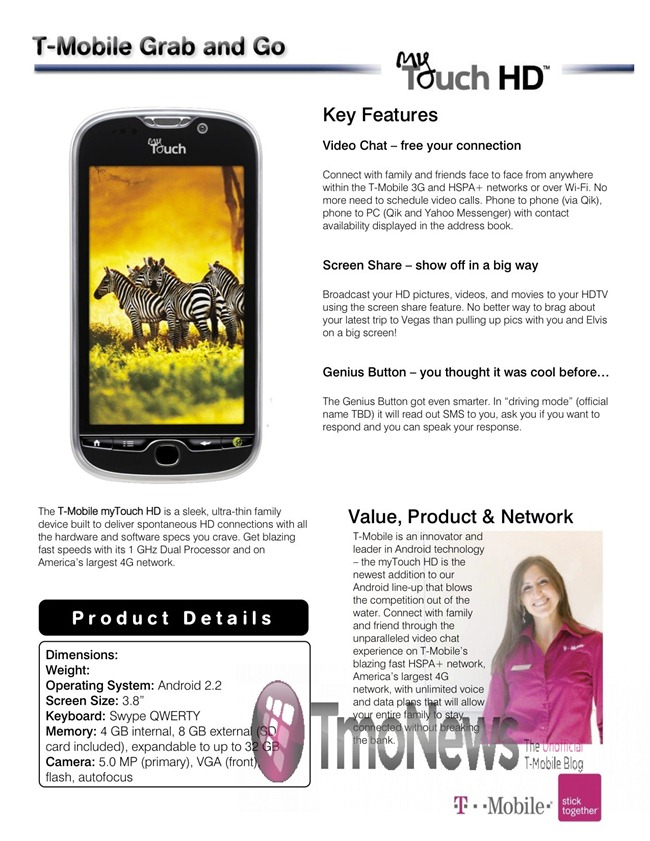 As I said before, I'm by no means certain it's fake, so I'd encourage you to read the document yourself and form your own conclusion. Even better: I encourage you to sound off with your opinion and the reasoning in the comments below.