Gartner, one of the top research and analysis companies in the world, has run the numbers and decided that Android could very well hold the #1 spot by 2014. Nokia's Symbian OS is likely to hold the top spot until 2014, and the analysts aren't certain Android will have taken the lead by then:

Symbian will remain at the top of Gartner's worldwide OS ranking due to Nokia's volume and the push into more mass market price points. However, by the end of the forecast period, the No. 1 spot will be contested with Android, which will be at a very similar share level.

The driving factor behind Android's explosive growth? A push into budget and mainstream devices - something we've already started to see with the IDEOS and Intercept. Samsung in particular is named as making a large push soon, with the other major players entering in soon after.

The numbers (yea, they're stupidly overlapped): 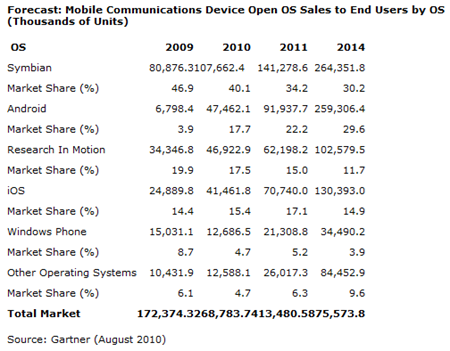 Personally, despite (or perhaps, because of) the fact that I do a ton of work with - and analysis of - investments, I think multi-year predictions are an iffy proposition. They're even more so iffy in such a highly competitive industry; we have yet to see how Windows Mobile 7 or Symbian^3 stack up, and you never know when a new competitor is going to come in and blow the world away. Think about it this way: 5 years ago, nobody would have guessed that iOS would come onto the scene, let alone steal the show - and yet here we are.

Likely something like that will happen in the next few years? Not really, but four years is a lot of time for a lot of things to change.