Prev
Posts in the last
24 Hours
sorted by
Hottest
Next
Update: Fruit Ninja is now available in the Market!
At the AppNation conference today, I got a chance to talk to Shainiel Deo, the CEO of Halfbrick, a company most known for its best selling iOS game Fruit Ninja.

Fruit Ninja is an addicting game in which you try to slash as many pieces of fruit thrown in the air as possible, getting bonus points for combo slices, while avoiding bombs at all costs. The biggest appeal of the game is probably its excellent graphics, fluid movements, and the satisfaction of chopping all that fruit in half. 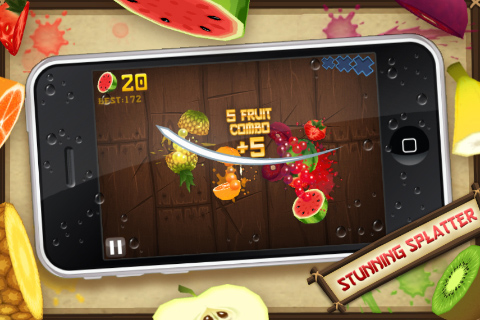 The new Arcade mode is coming to the iOS version this week and the Android version in the future. In Arcade mode, you get 60 seconds to slice as many pieces of fruit as you can, power-ups that give you special powers, and bombs that now cost you lost points instead of lives.

In the past couple of weeks, you may have seen a bunch of Fruit Ninja copycats come out on Android, such as Ninja Kaka and Fruit Pirate. Fruit Ninja for Android, launching in just a few days on Wednesday, September 16th, will be showing them who is boss. It will include Open Feint support, which brings cross-platform leaderboards, achievements, and social features (we'll cover the Open Feint launch separately on Wednesday from their offices).

In this video I shot, Shainiel shows off the newest unreleased version of Fruit Ninja on an iPad and talks about the Android launch:

According to Shainiel, Fruit Ninja was ported to Android straight from iOS using the NDK (native development kit), and the whole process took only about 2 weeks. Shaniel also mentioned that the iOS version crossed 2 million downloads, and he's now very eager to see how its Android counterpart will do.

Fruit Ninja will be available from the Android Market for $0.99.

Having played both the iOS and the iPad version, I can say that it's definitely a pretty addicting, yet simple, game, and will certainly be a valuable and welcomed contribution to the Android market.

You can discuss this at DroidForums.net.