It's that time of month again: Android's platform distribution numbers are up for the period ending September 1, and things are looking pretty good. Android 2.1 is up to nearly 41.7% of the market, and 2.2 checks in at 28.7% - between the two, 70% of Android phones are running 2.1 or better.

In early August, we found some data from Chitika which suggested that fragmentation is worse in iOS than Android. Given the continued consolidation of Android, it's not surprising to see that iOS fragmentation is still substantially worse than that of Android. 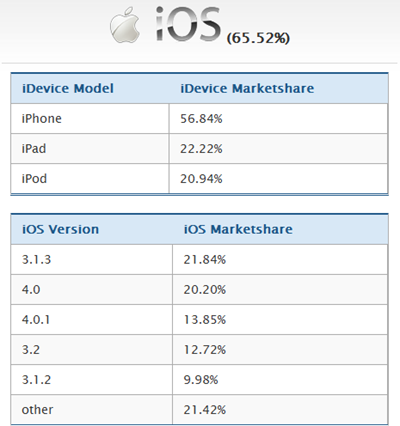 Interesting stuff indeed, although the mandatory disclaimer: the Chitika data is a sample, whereas the Android data is from the population.

Thoughts? Sound off below.

AMOLED Screens Are In Short Supply. The Incredible Is Feeling The Pain.

Wirefly And Amazon Cut Samsung Fascinate's Price In Half - $99.99, No Tax, And Free Shipping