While we all wait for Google to officially institute PayPal as a payment option in the Android Market, Scoreloop has decided to beat Google to it by including it in their latest update. Developers who use Scoreloop with their games can now use PayPal to offer in-game purchases to gamers.

In-game purchasing is the key to many games success, and its implementation is essential if Google would like to lure developers to their platform. This business model, known as Freemium, allows gamers to get the full version of a game that would otherwise be a paid application and in exchange, the developer can offer premium in-game content for a fee.

Many games that have been very successful on Apple’s App Store use this business model and a lot of these games are really top quality. To get these games onto Android, there needs to be an in-game payment solution and while there are a lot of companies that offer this service, PayPal already has global reach, so including it in Scoreloop is a fairly smart move. So far this new addition to Scoreloop is being well received:

"This is great," said Hubert Sliwka, of Gamesoul studios. "PayPal is the best way to let users purchase additional in-game content, and I‚m relieved that Scoreloop is taking care of everything."

While paid applications and games on the Android market can only be accessed by 13 countries, the inclusion of PayPal into Scoreloop will allow developers to reach PayPal’s 200 million strong user base. 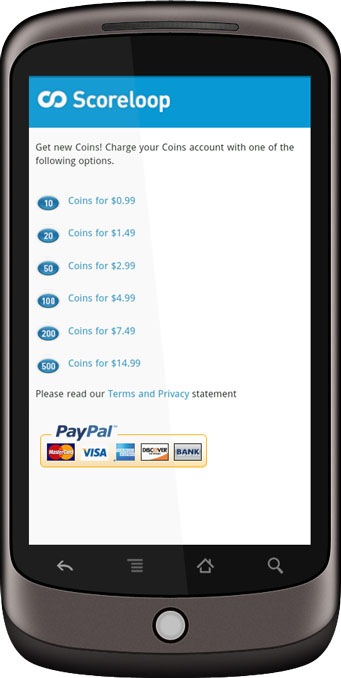 This allows developers to reach a much larger user base,  and hopefully we will see PayPal fully integrated into the Android market sooner rather than later. It’s a small step towards expanding Android’s reach, and, ultimately, making it more attractive to users and developers alike.

"Monetization is a real issue on Android. The Android Market's payment still has quite a bit of room for improvement, so developers are relying on ads to monetize," said Marc Gumpinger, Scoreloop CEO. "Scoreloop has already helped developers raise ad revenues with engagement tools, and with 100,000 new users per day Scoreloop is a key driver of activity on the Android platform. By adding PayPal support we now also make it easier for developers to directly monetize their games along with our virtual currency."

There’s clearly a desire for this to be officially integrated in some form by Google, so hopefully Scoreloop’s move will help motivate them to bake a solution in at the operating system level.

GPS Fix For CyanogenMod 6 On The Nexus One