When it comes to photo editing on the fly, there are usually two kinds of apps: those intended for mindless fun, and those intended for actual work. Without a doubt, Camera ZOOM FX falls into the latter category, along with its mediocre UI, strange (though not necessarily poor) selection of effects, and (relatively) low price tag. So is it worth a look? A purchase? Read on for the full Android Police review. 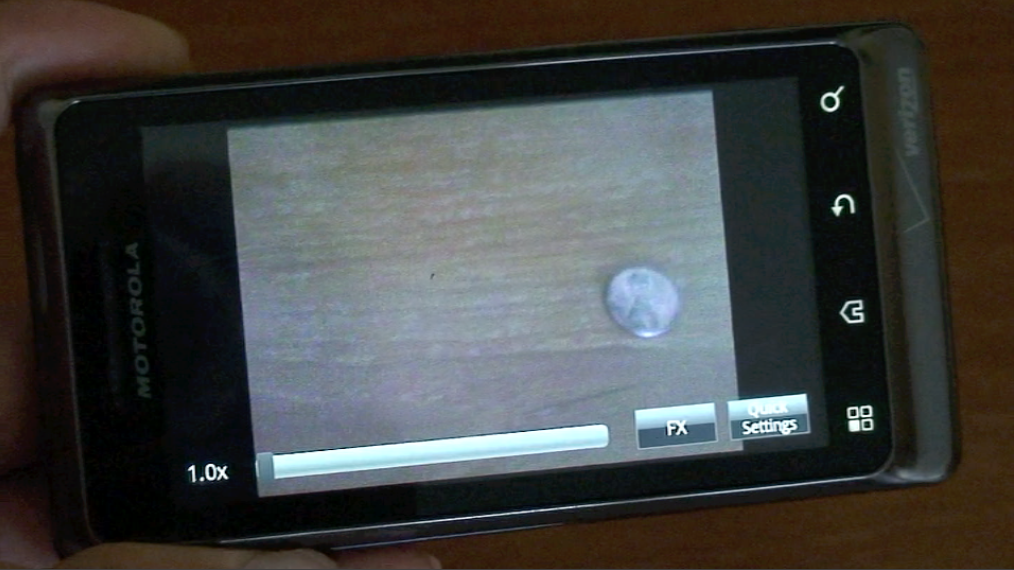 Like I said in the introduction, Camera ZOOM FX's design is not exactly my definition of sexy. The problems begin when you first open the app and discover just how ugly the UI is.

The app puts a preview of the image you are about to capture front and center (one of the few good aspects of the design), below which is a slider for zooming, next to which is a button that sends you straight to the selection of effects, which itself is located next to a button that takes you to the app's preferences (rest assured, these are all things that will be covered in more detail below). Not that anything is wrong with these buttons or their layout, it's just that they're so unbelievably ugly.

Another thing that's unbelievably ugly is the app's icon. As you can see from the this article's thumbnail (next to the title) Android Slide (the developer) has, for some reason, given Camera ZOOM FX an icon clearly more suitable for the older HVGA (320x480) devices rather than the newer WVGA (800x480 and 854x480) gadgets. It's like a trip back to 1990.

There's no beating around the bush: from the all-black buttons (the white top halves don't help) to the 2D menu of effects (this is an area where 3D would have been perfect), this is one appalling UI. One could argue that it goes well with the stock Android aesthetic, but then again, vanilla Android isn't exactly praised for its looks.

As its name implies, Camera ZOOM FX allows you to zoom up to 6x. Sound good? There's a catch: one would expect that when you slide your finger along the slider, the on-screen preview of what the camera's taking in would zoom in accordingly, but, strangely enough, the preview remains the same, and you can't view the final result until the picture is taken, which essentially makes the entire zoom function useless.

Update:Android Slide has since notified me that the app is indeed capable of updating the onscreen preview of what the device is zooming in on in realtime. Thing is, it's not compatible with all devices, and the Droid 2 I tested the app out on just so happens to be one of the phones incompatible with this feature. Oops!

The other thing the app's name hints at is FX, which is, of course, short for effects. 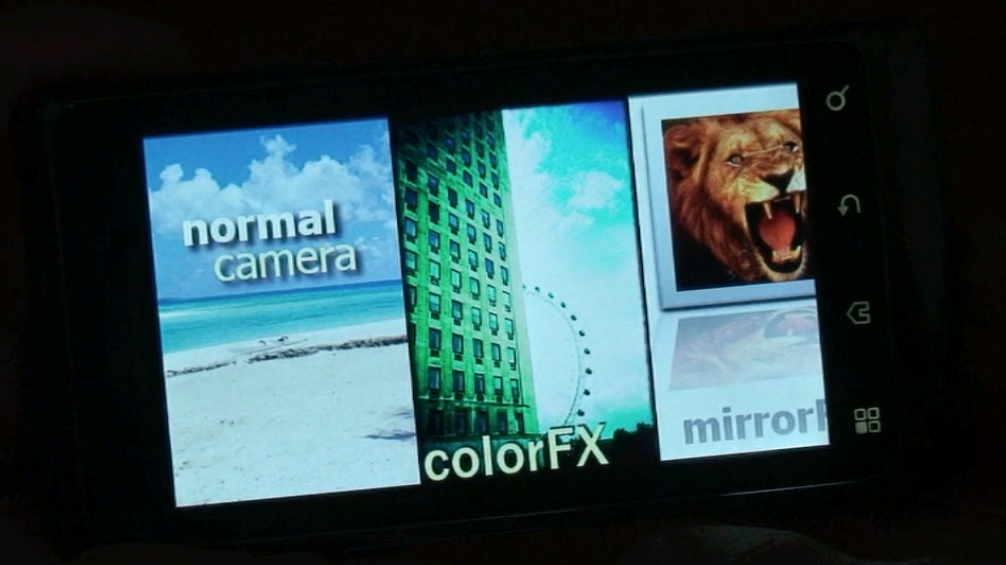 Where to begin? As you can see, when you first tap the "FX" button, you are presented with a visual menu of effects. From here, you can scroll to the left to see more, or simply tap on one of them to bring up another visual menu that should look something like this: 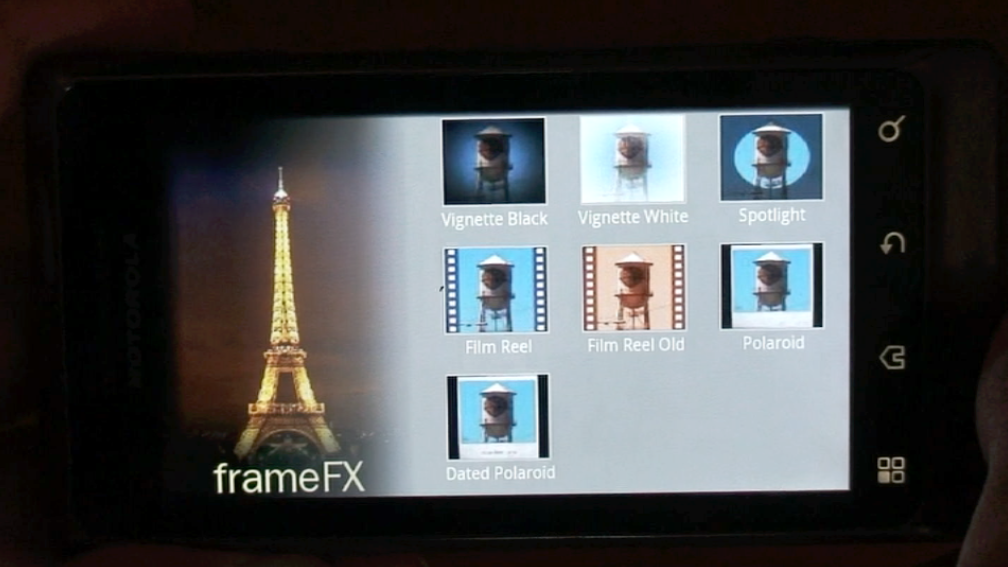 From here, if you tap on any of the items, such as "Film Reel," the corresponding effect will be applied.

There are dozens upon dozens of effects, but, as I like to say, quality is more important than quantity, and Camera ZOOM FX simply doesn't deliver on the former part of that statement. For one, most of the effects included in the app are complete gimmicks, like "Mirror Top" or "Fuzzy Crosses." Don't get me wrong, some of the included effects are really useful, like "High Contrast" or "Mono" (black and white). Unfortunately, those are the exceptions and not the rules, and the truth is that Camera ZOOM FX simply won't cut it for professionals on the go. Those looking for an app that offers serious photo editing on the fly should take a look at Adobe's (free!) Photoshop Express or Picsay Pro before even thinking about buying this app. 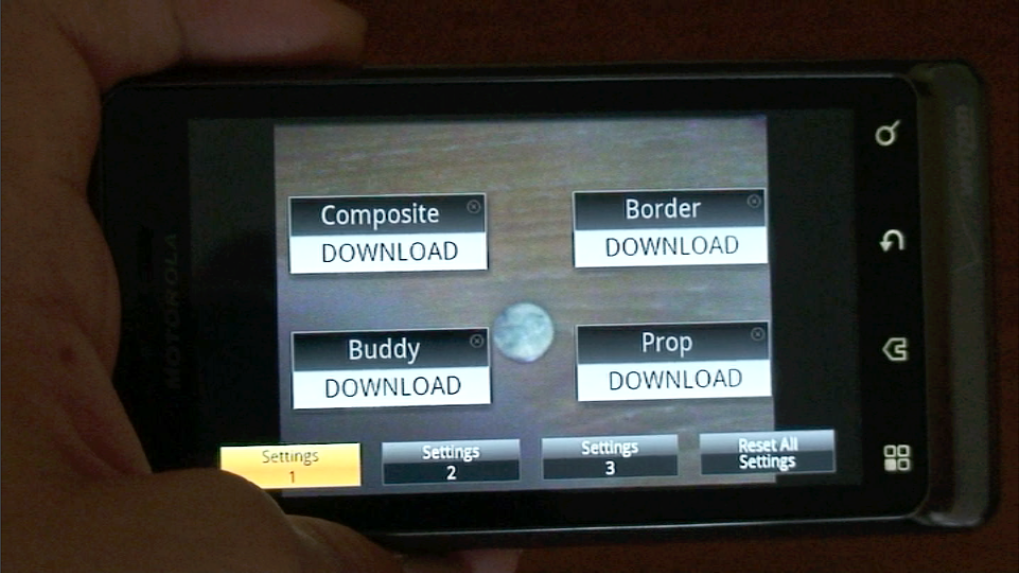 As you can see from the picture above, the "Settings" section of the app is split into three separate screens: "Settings 1," "Settings 2," and "Settings 3."

On the "Settings 1" screen, there are toggles for "composite", "border", "buddy", and "prop," all of which require users to download add-ons for the app from the Market. It's nice that the app is flexible enough to allow such add-ons, but including them in the app itself would have been even better and gone a long way towards ease of use, which is one area where the app is already lacking.

In "Settings 3," there are yet more toggles, this time a bit more pedestrian: (perhaps "Settings 3" and "Settings 1" should be switched around) autofocus, stable shot, timer, and burst mode.

Of course, if you paid close attention to the image above, you noticed that there is a fourth button on the bottom: "Reset All Settings." This supposedly simple button comes with an issue of its own: there is no warning. Multiple times in my testing of the app, I accidentally hit it while adjusting my grip on the device, immediately dispatching all the settings I had so tediously spent time adjusting. Couldn't there at least be a warning saying something like, "You're about to lose all your settings. Are you sure you want to continue?"

So the feature set obviously isn't the richest or the best, but how's the experience? Sorry to break it to you, but the overall experience of using the app is also a disaster. Actually taking pictures with the app is way less obvious than it should be. It sounds (and is) simple enough, since all you have to do is tap the screen, but the time initially spent searching for a "take picture" button or at least compatibility with the camera button on devices like the Droid 2 or the Epic 4G was simply unforgivable. The least Android Slide could have done was include a pop-up message when the device is first booted up saying something like, "Hey! You can tap the screen anywhere to take a picture!"

The issues don't stop there: one would assume that, when in the effects (or rather, "FX") menu, a press of the back button would take you back to taking a picture. Alas, a press of the back button will return you to the homescreen, and the only way to actually get back to taking your picture is to tap "Normal Camera" and then "Normal." Yet another inconsistency in Android's already inconsistent UI!

Worse still is the fact that there is no way to edit video, even though a press of the menu button while at the screen that displays a preview of what's in the camera's perspective does bring up a "Video" button (which takes you to your phone's standard video recorder). Additionally, there's no way to edit images in the Gallery, so the images I took on my trip to the White Mountains had to be left as beautiful as they were when I took them, without any effects at all. Interestingly enough, despite this limitation, the only way to apply multiple effects to an image is after you've taken it but before you hit the "Save" button. Weird.

This is another area where there's simply no other way to put it: the app is not at all fun to use.

The Verdict: We're All Missing The Point

In case you haven't caught on yet, I'm not a huge fan of Camera ZOOM FX's disastrous UI, confusing settings that require downloading of additional items, and limited feature set. Despite what that sounds like, that doesn't mean I don't like the app! Wait a minute, what? After all that bitching, you're telling me you like the app? Well, not exactly.

The truth is, it doesn't fit my needs: it's not often (in other words, never) that I need to apply a Kaleidoscope effect to my images, although I would like to at least be able to crop them. The thing is, we, in all our tech blogging, Android-loving, hacking glory, probably aren't the app's intended demographic. The app is aimed at an admittedly younger target who is just looking for some nice, cheap, fun on the run. It's more of a PhotoBooth (you know, that pointless but fun app bundled with Mac OS X) than a PhotoShop, more of a World of Warcraft than a Call of Duty. Still, for what it is and who it's aimed at, the app will definitely make a nice impression, especially with its price tag of a mere €2.99.

If you're one of the above, please send an email to [email protected] to claim your prize! Oh, and if you didn't win, remember that there's always next time!

C'mon, you thought we'd leave you without a giveaway on this one? Think again!

Check out the review and giveaway of Camera ZOOM FX for #Android from @AndroidPolice: http://bit.ly/ap-camzoomfx

Now all that's left is to fill out this form so that we know how to notify you if you're a winner.

The giveaway starts right now and goes on until 11:59PM September 15, 2010. If you're one of the lucky 10 winners, we'll get in touch and let you know now to claim your prize. Have fun!

The King Lives! Nexus One Developer Phones Back In Stock