Nonetheless, the carrier HTC decided to bless - US Cellular - was in desperate need of a decent Android phone, and, if nothing else, the Desire absolutely beats the pants off its only other Android offering - the Samsung Acclaim.

Before I begin, I want to thank US Cellular for sending a review unit to the Android Police offices and making this review possible. 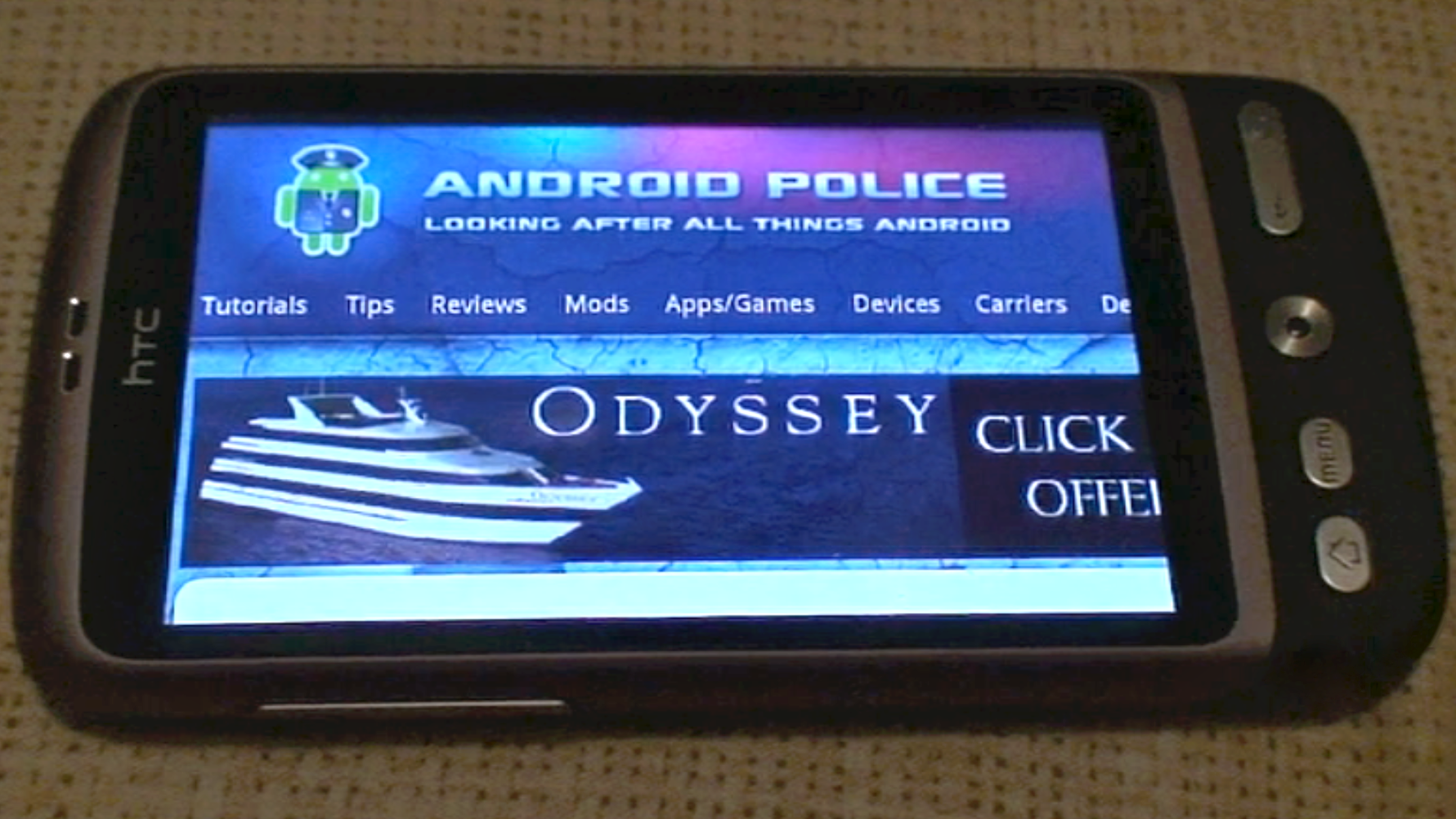 Before the fun begins, there are indeed some specs to go over:

Now that we've got the specs out of the way, I can go ahead and put it out there: the Desire is one of the sexiest smartphones I've ever laid my eyes on.

The Buttons And The Joystick

It all starts with with the buttons at the bottom of the device: 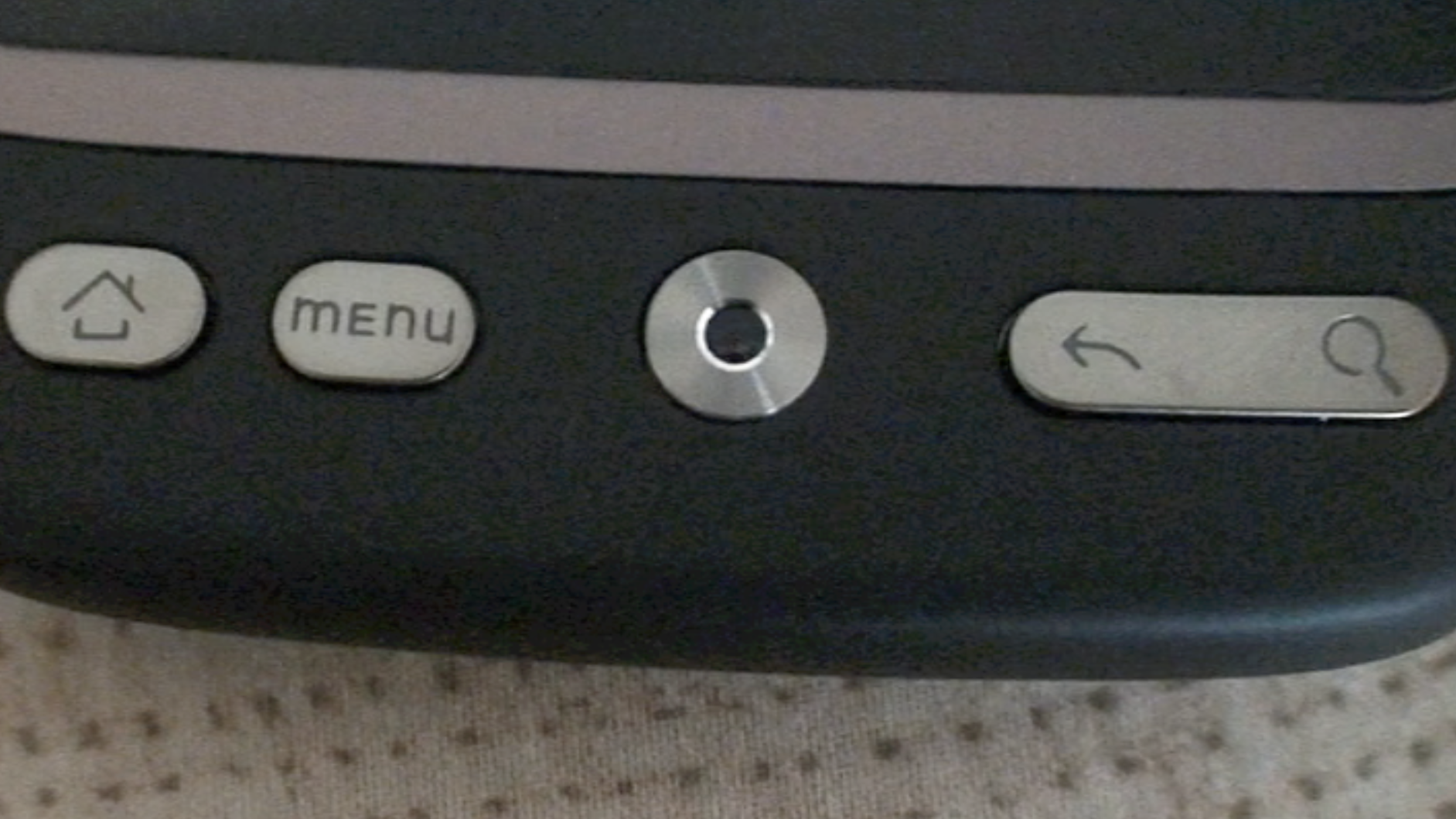 As you can see, the layout is the same one HTC uses on the EVO 4G and the Droid Incredible - overall, a good thing, though coming from some quality time spent testing the Droid 2, they did take a little getting used to.

The layout isn't all I have to say about the buttons; while their brushed metal felt as good as it looked, blending the "Back" and the "Search" buttons together without doing the same to the "Home" and "Menu" buttons was a questionable decision to say the least.

Meanwhile, the optical joystick that comes between the separated and the unseparated buttons is a huge improvement over the trackballs found on devices such as the Nexus One and Droid Eris. For one, it doesn't stick out of the device, thus avoiding the creation of a huge (and awkward) bulge in one's pocket. For another, I found it much easier to use, especially since it allows users to aggressively swipe over it to rapidly scroll down, up, left, or right, or gently swipe over it to do so in a more gradual manner. 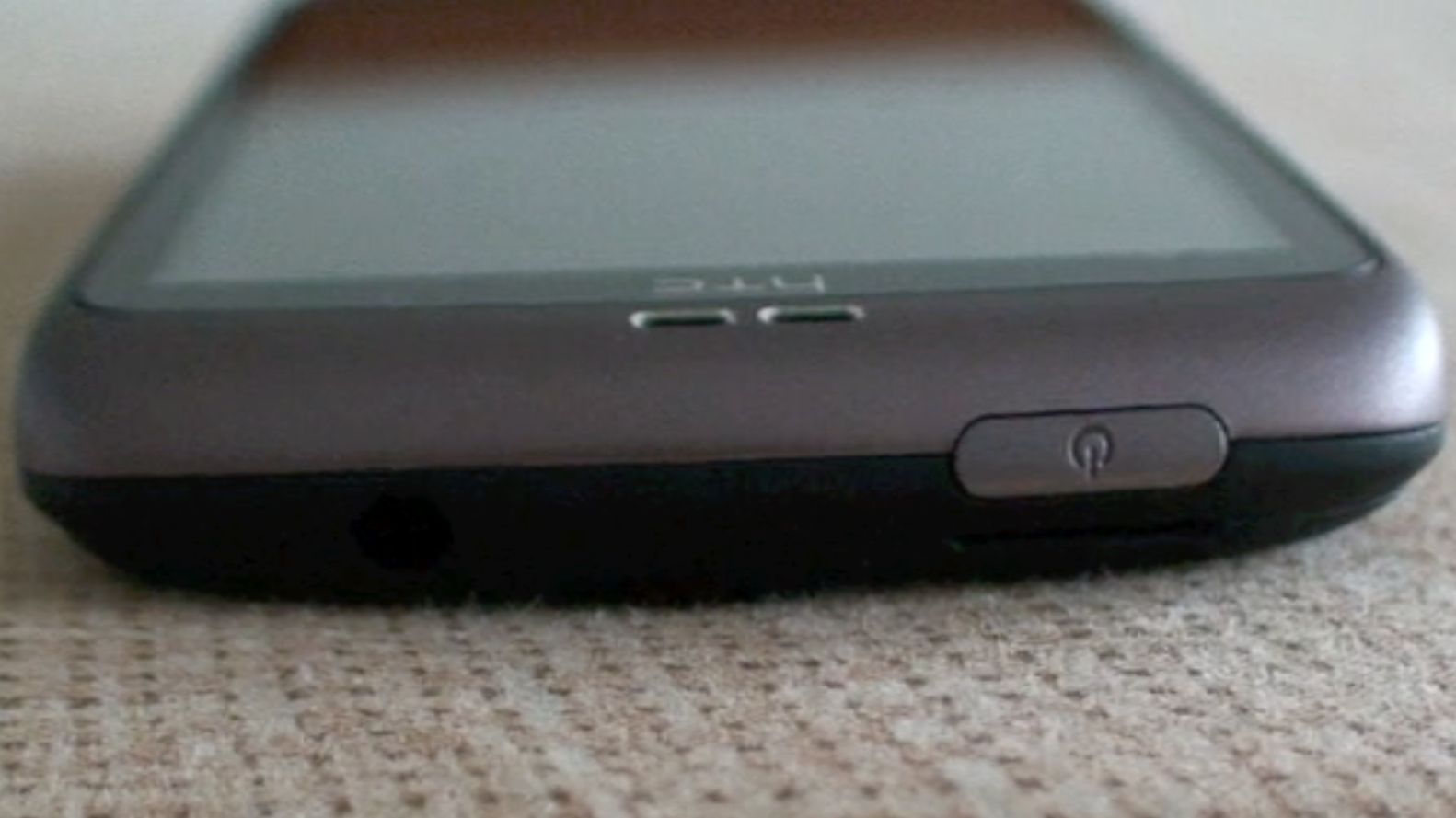 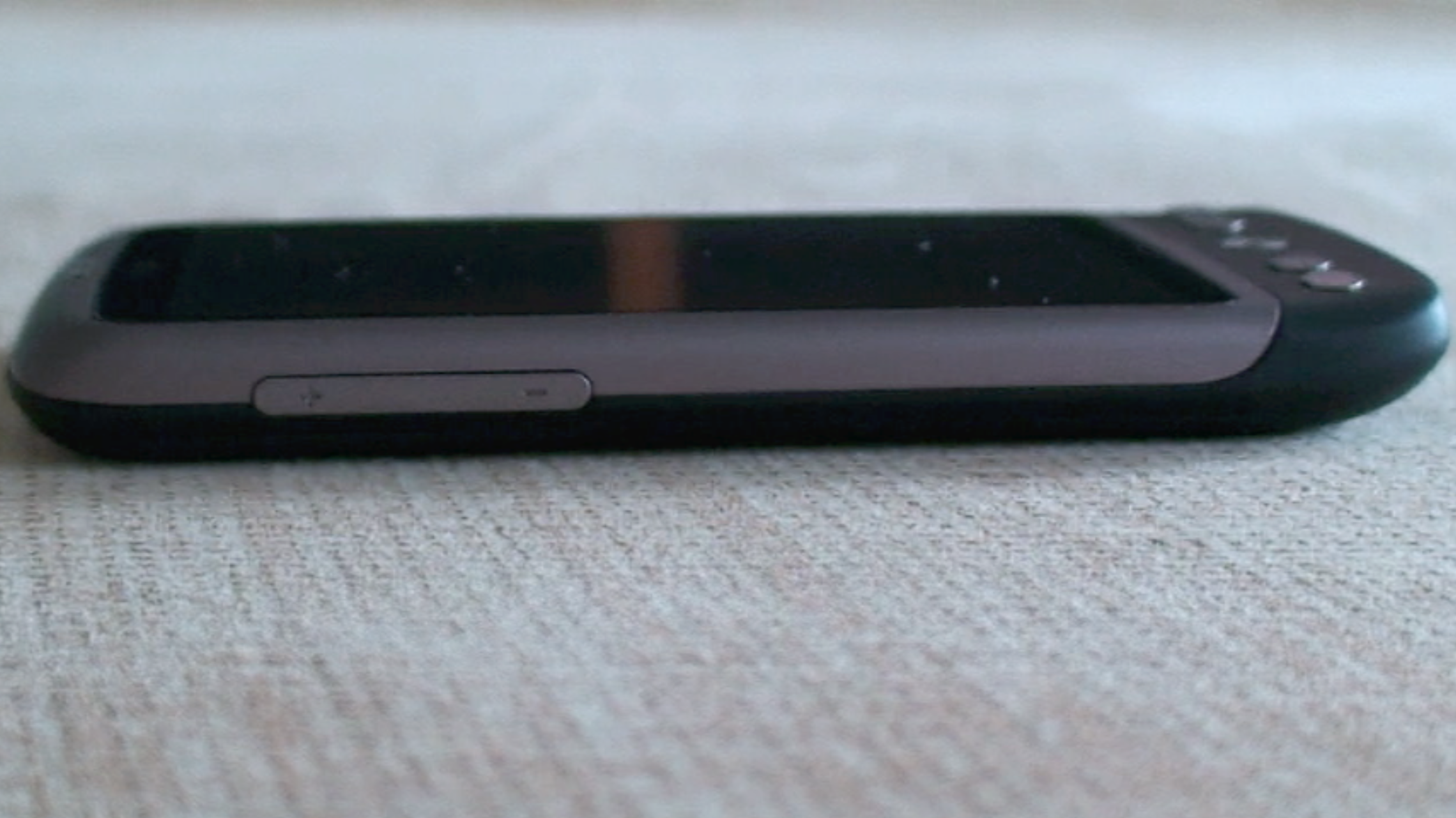 Speaking of what lies above, the 3.7" display is topped by an HTC logo, an earpiece, and a light indicator. The left side of the device also contains the volume rocker, while the right side is empty, the bottom contains nothing but a microUSB port, and the top side contains the power buttons and a 3.5mm headset jack. 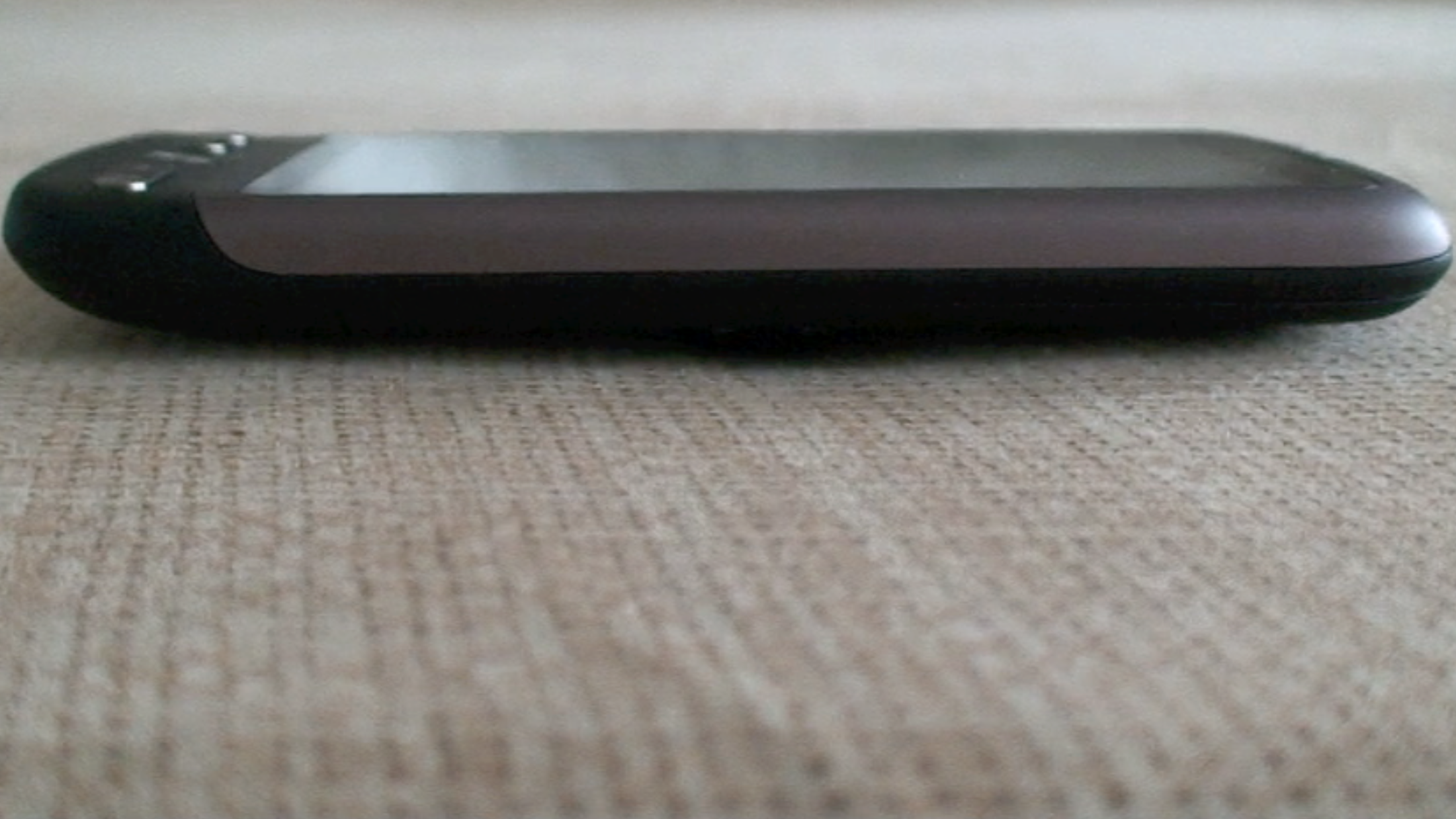 In addition, the smartphone is amazingly thin, thinner than any of HTC's other offerings (save for the Nexus One, which is no longer on sale and was the same thickness - 11.9mm). It also gives the impression of being made of aluminum, despite the fact that the cover of the device, both front and rear, is made entirely out of plastic. Still, it looks great, feels great, fits great in the pocket, and, at least to me, that's what matters.

One last design note: those four buttons at the bottom that I spent so much time describing - it turns out they sit on an ever-so-slight chin. While it doesn't jut out from the device like it did on several previous HTC-made devices, such as the original Hero and the G1, it certainly gave us nostalgia!

The 3.7", 800x480, Super LCD display is the one thing about the Desire that's not ripped straight off the version of the phone that HTC launched six months back. Originally, I was worried that the Super LCD display wouldn't be able to stand up to the likes of Samsung's new Super AMOLED screens or even the older AMOLED version used in the original Desire, but after putting it through its paces, I am happy to say that I was wrong. 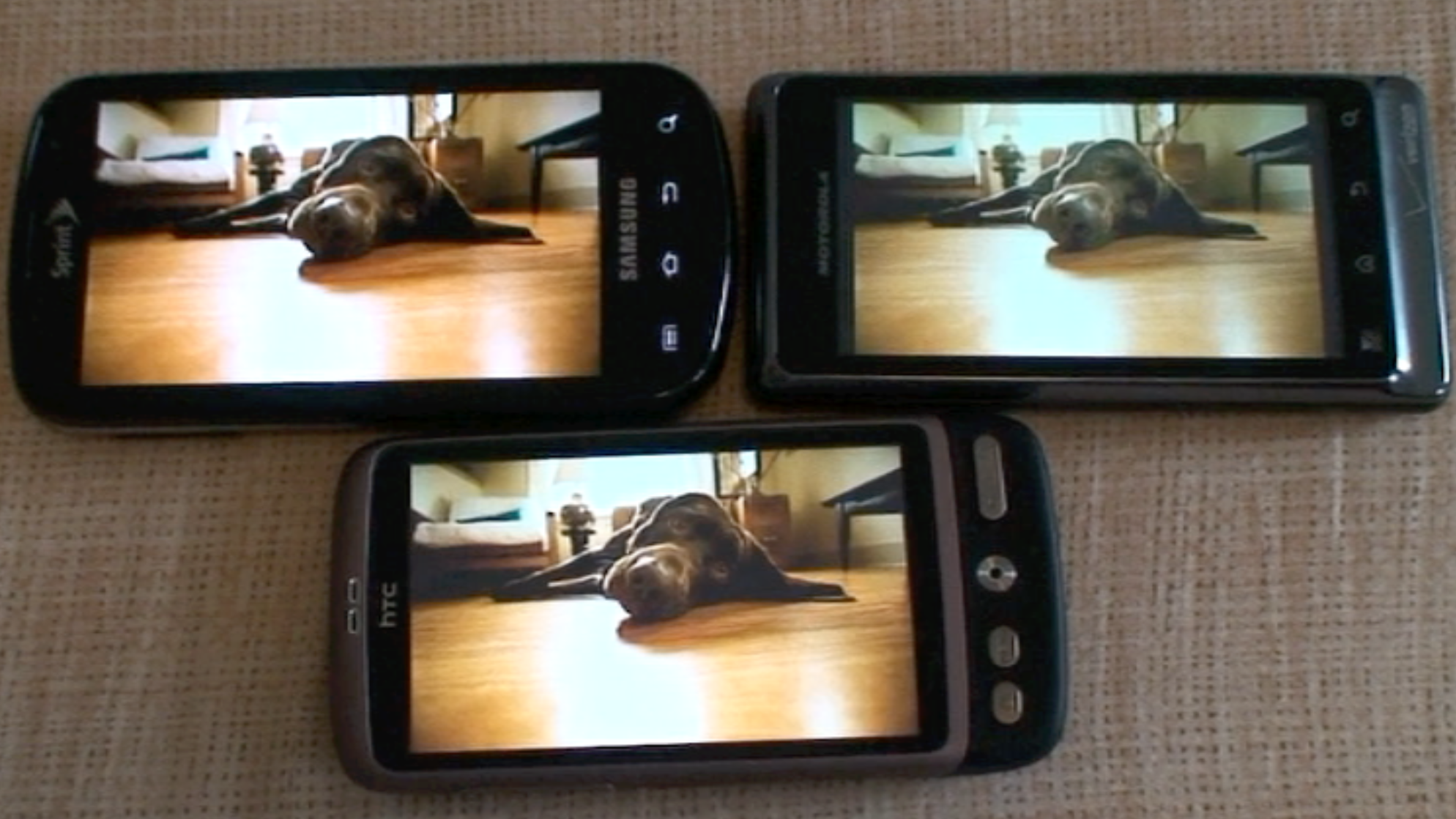 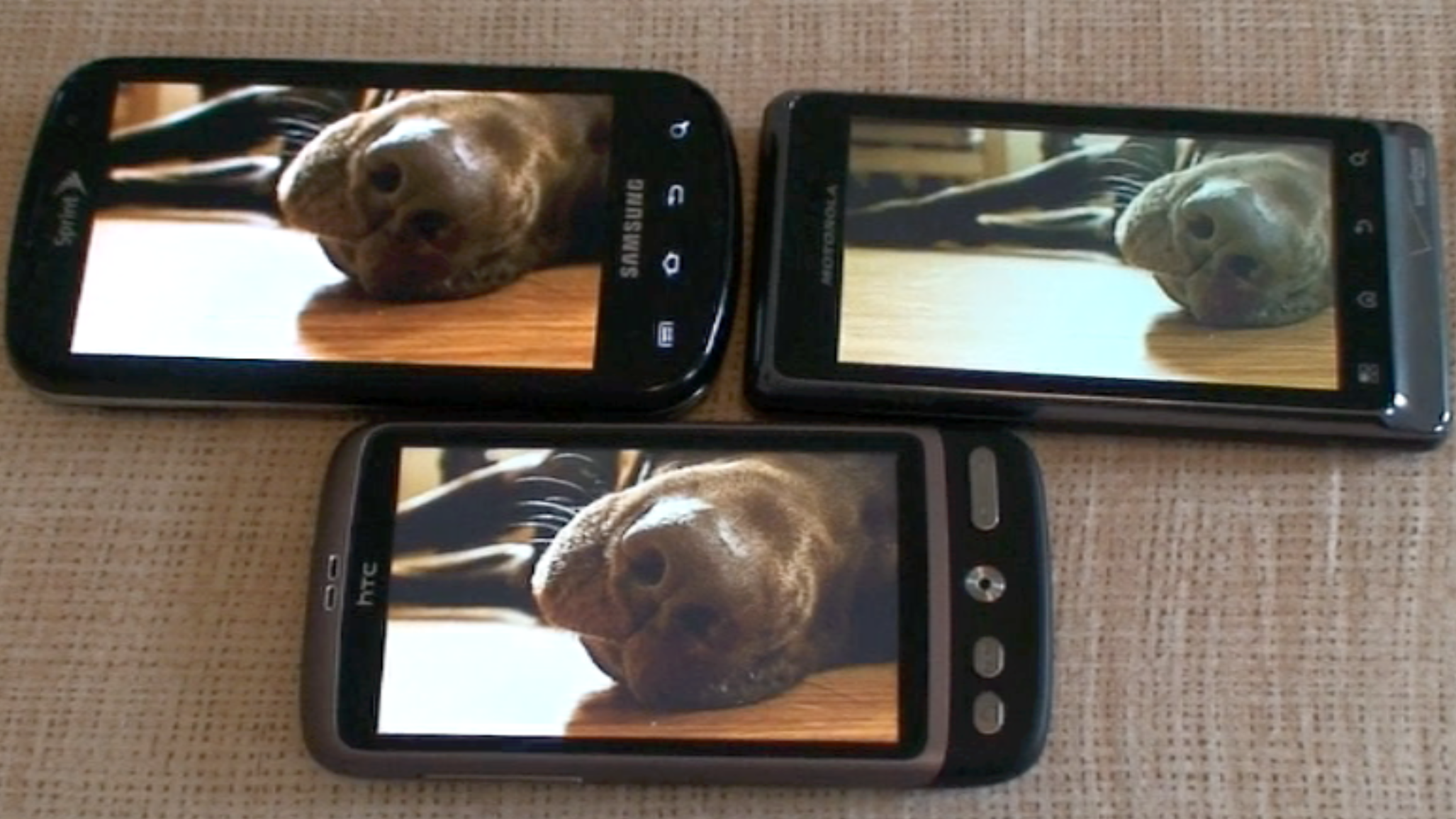 As you can see, the Desire's 3.7-inch, 800x480, Super LCD display tends to fall right in between the Droid 2's standard LCD and the Epic 4G's Super AMOLED panels. Here's how it all pans out:

Does the Desire have the best display out there? No, that title is reserved for the Galaxy S line of phones, with their amazing Super AMOLED jewels. Is its display an improvement over standard LCD? It depends what you want; Super LCD screens tend to be a bit brighter, have more vibrant colors, and have an overall better contrast, but their performance in sunlight is decidedly inferior to say the least. Plus, despite the fact that the colors are more vibrant, blacks feel more like dark blues, and pale when put side-by-side with standard LCDs or especially Super AMOLEDs.

Still, I wouldn't consider the Desire's display to be a con, even though it's not a pro in my book either. 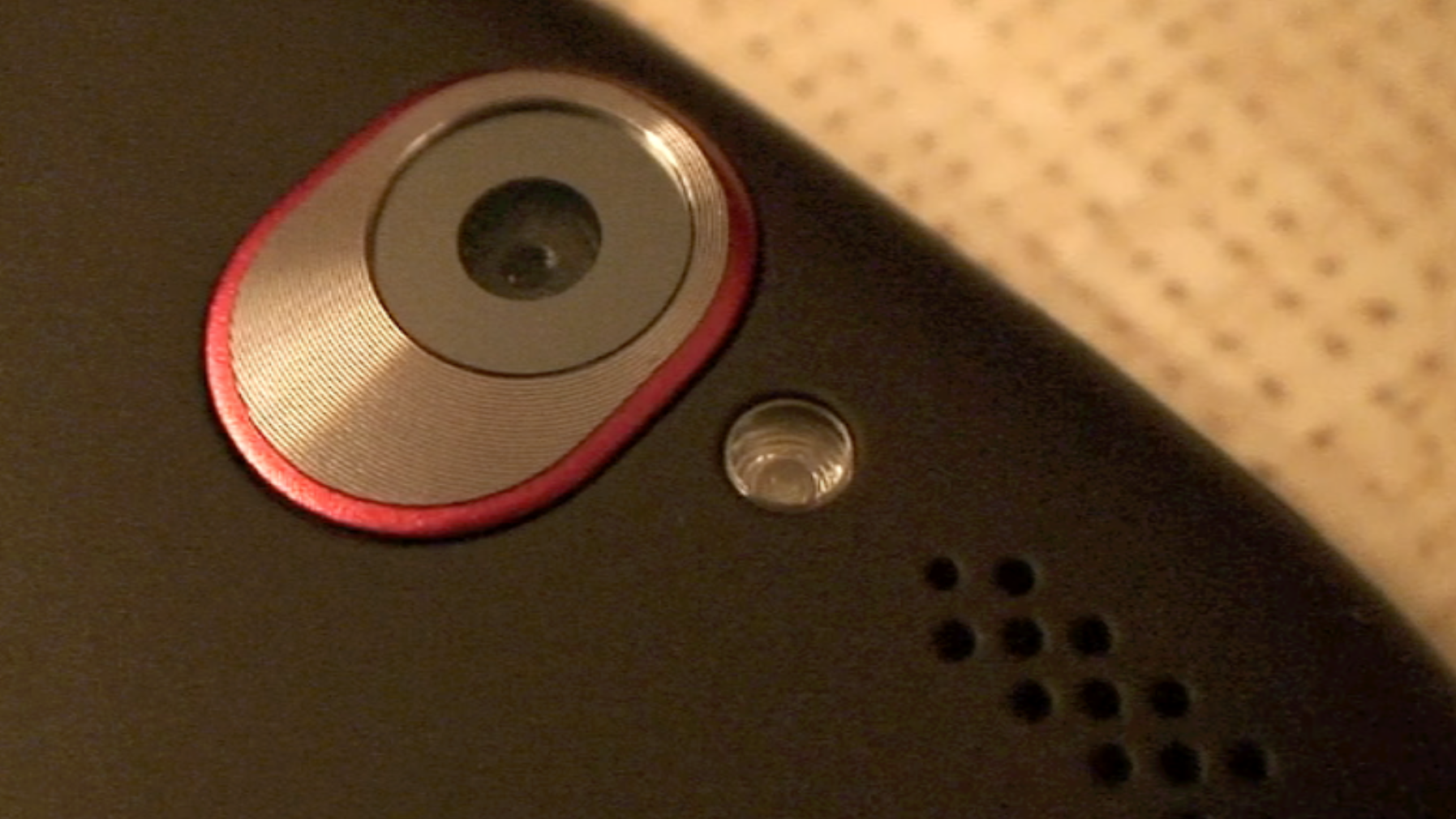 Unfortunately, HTC has seen fit to carry over the 5MP camera from the original Desire, save for the black border, which is now red. To say it's one of the worst cameras to disgrace an Android phone this year would be a drastic understatement. I know, I complained about the Droid 2's as well, but if the Droid 2's is mediocre, this is catastrophic. 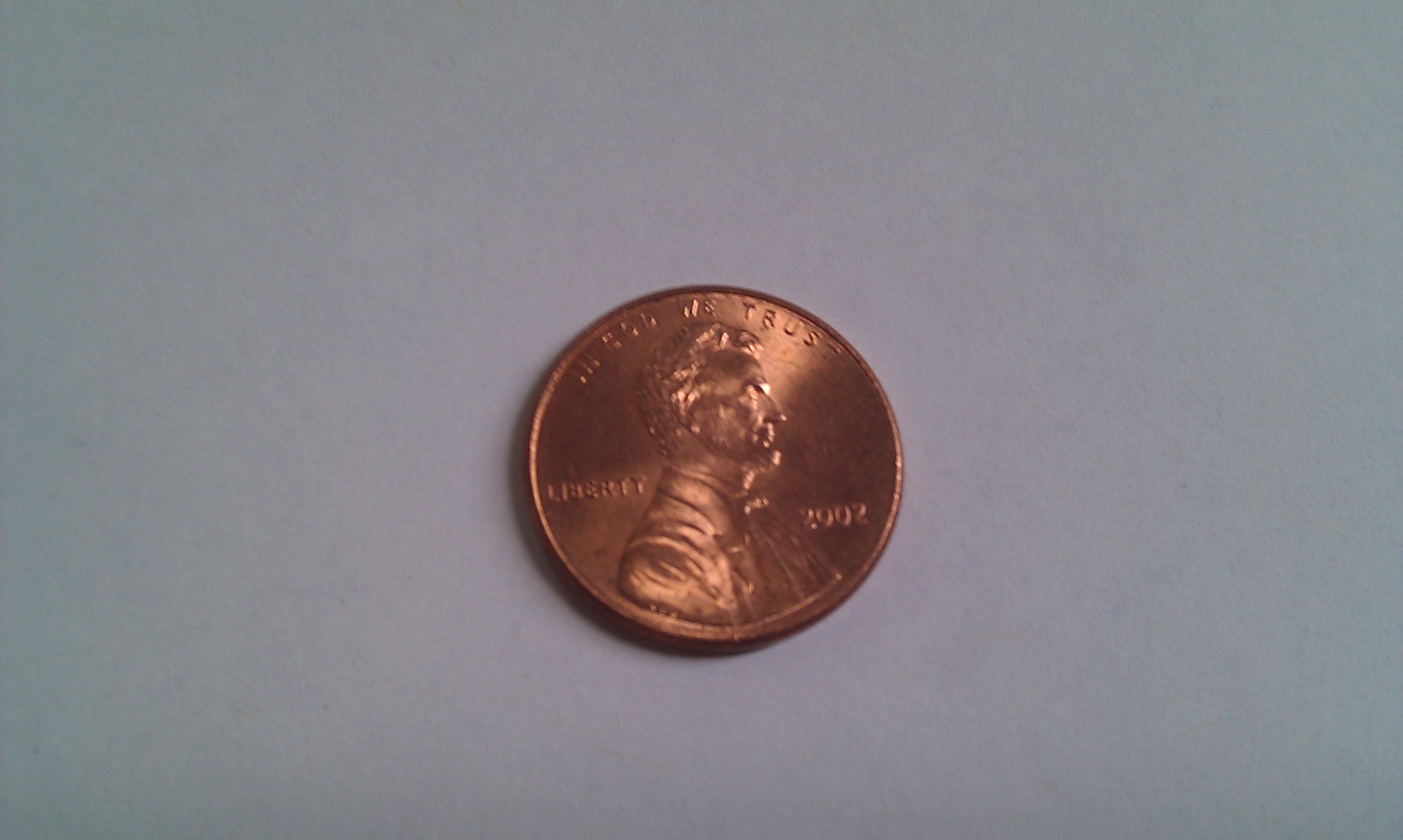 As the above image shows, photos taken in average lighting conditions came out extremely blurry and details were illegible. 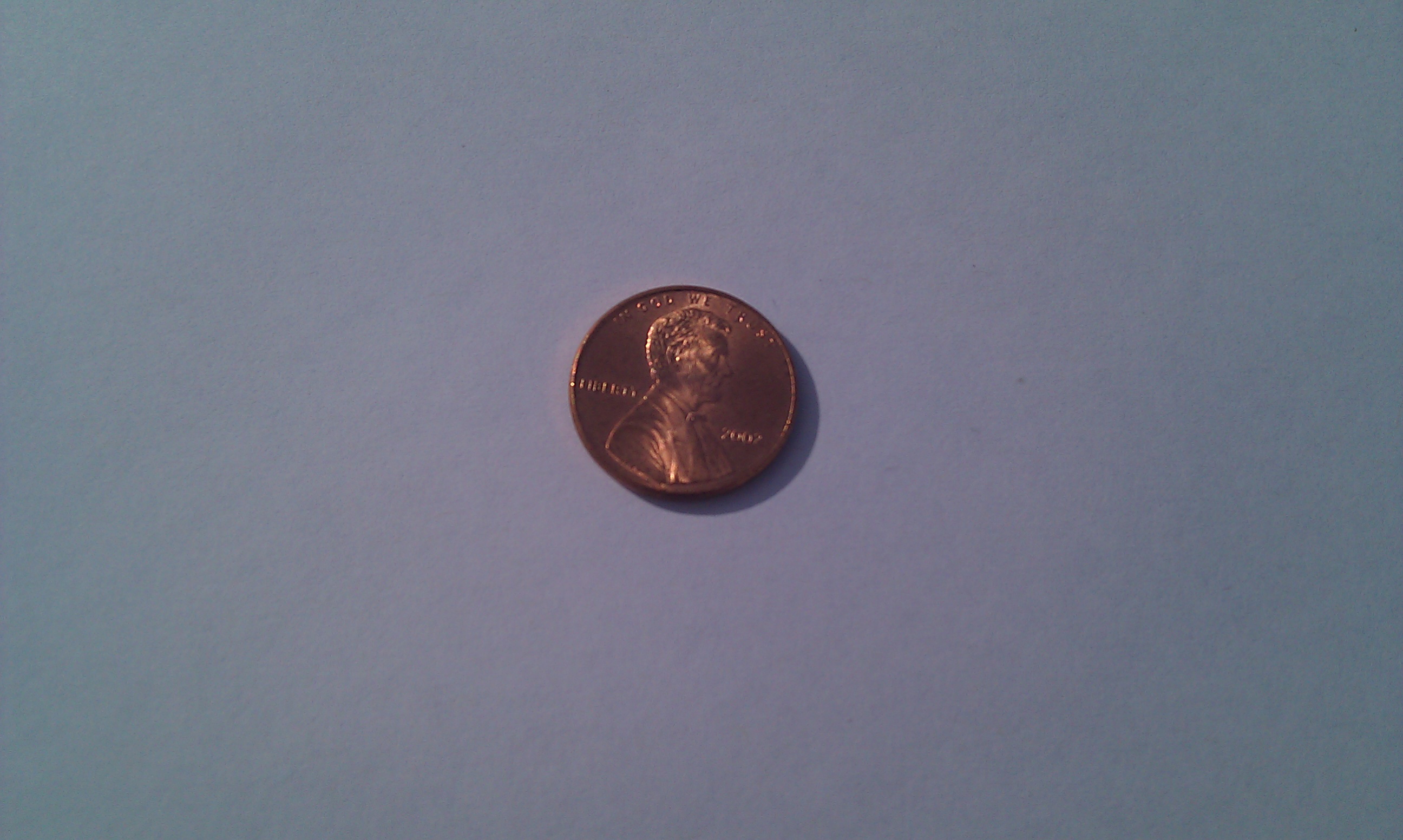 Even photos taken with light streaming in like nobody's business looked like they'd been pulled straight out of a nightmare. 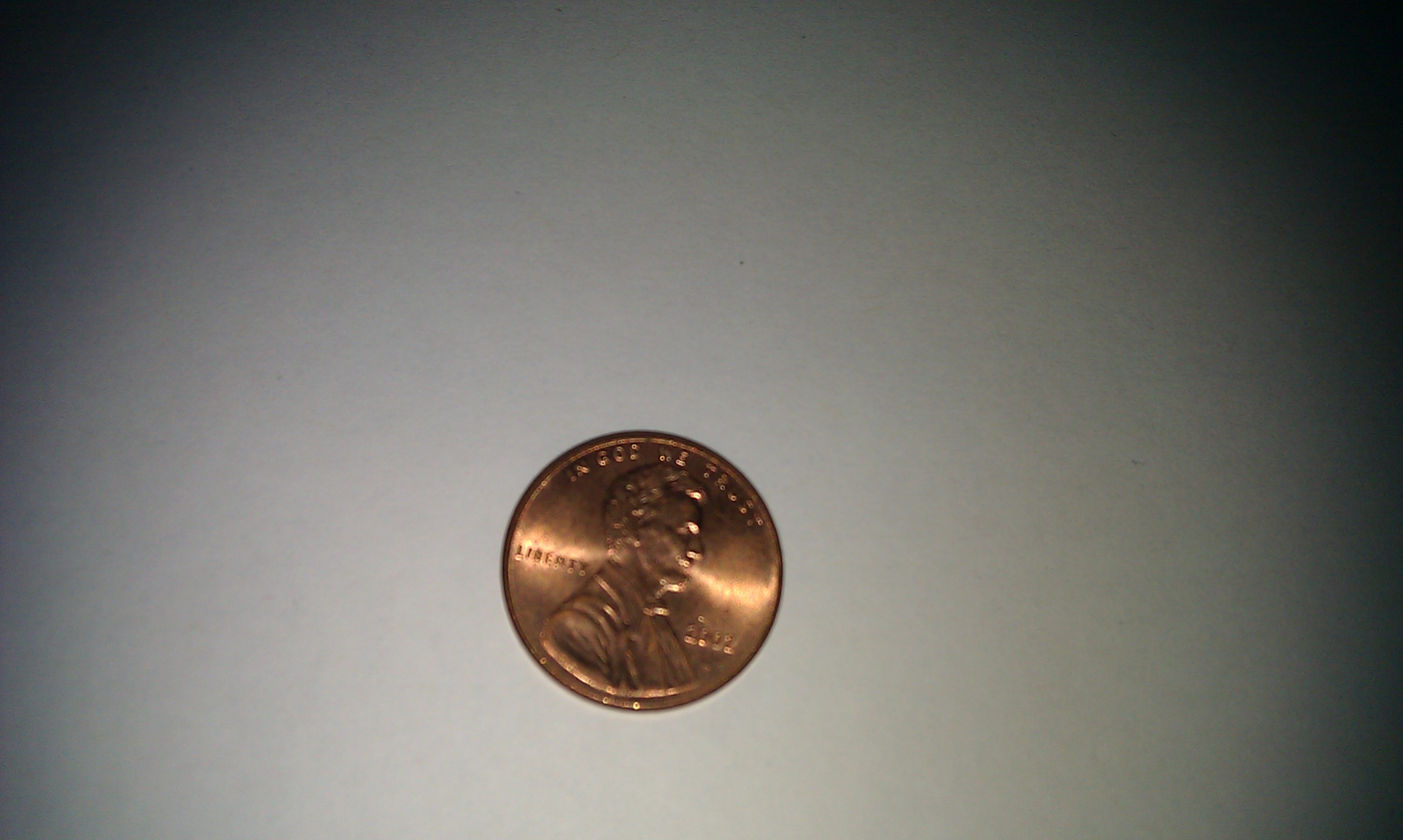 Low light? Don't even think about it.

Video quality is equally bad: although the Desire is capable of capturing 720p video, it looked to be about 10 or so frames per second, and audio quality sounded like something out of a cheap 1980s horror movie.

Despite the fact that Android 2.2 FroYo was announced in May of 2010, which is now about five months, and the fact that even devices running the same Sense UI as the Desire are now getting the update to FroYo, this particular smartphone in the US still runs 2.1 Eclair. In fact, when asked to comment on the issue, US Cellular told me that while the Desire will be getting updated to FroYo, they have no timeline for it, only that it will be later this year.

In the meantime, you'll just have to stick with the long-in-the-tooth Android 2.1, with only HTC's Sense UI to relieve you. That's not to say Sense is a bad thing - in fact, it's the best Android skin I've seen so far, but perhaps scrapping it altogether and just loading stock FroYo on the phone would have been a better decision.

In case you aren't familiar with Android 2.1, you do get access to almost all of the applications in the Market (except for a few, such as Adobe Flash Player), a couple of widgets, several live wallpapers, and speech-to-text. After that, you get the HTC customizations, such as more (and much hotter!) widgets, an improved camera app, and the app drawer. After that, you also get US Cellular's customizations, although they've been relatively kind here and included very few (which is a good thing, just look at what AT&T does to their Android phones). In fact, the only ones included here are a single static wallpaper, an app called "My Contacts Backup," a MySpace app, "Tone Room Deluxe," and "Your Navigator." Yes, "Your Navigator" essentially duplicates Google Navigation's functionality, and I don't know anyone who hasn't ditched MySpace in favor of FaceBook, but at least US Cellular didn't cripple the phone's ability to download non-Market apps (I'm looking at you again, AT&T).

Linpack benchmarked the Desire at 6.831 MFLOPS, which is almost exactly what I'd expect from a 1GHz Snapdragon-packing device running Eclair but still nowhere near what I'd expect from a FroYo device, which would be something more akin to 30 MFLOPS. In daily usage, however, the device practically screamed. After the FroYo update comes along, the speed should improve even more drastically.

Battery life was a different story: the Desire fell far behind the competition in this area. In my standard battery test, where the phone was forced to play a YouTube video of Google I/O 2010 repeatedly with brightness turned all the way up and WiFi turned off, the Desire lasted a mere three hours, a full hour and a half behind the Droid 2 and even fifteen minutes less than the infamously poor-battery-packing Droid Incredible. Not good.

Call quality was yet another story: calls sounded decent, if not phenomenal...when in US Cellular coverage, which is not available everywhere. For example, Boston, one of America's largest cities, generally receives only one or two bars. Where you don't get it (which happens more often than not), you're forced to roam on other CDMA networks, such as Verizon's or Sprint's, who, for obvious reasons, prioritize traffic coming from devices built for their networks over devices from other networks, providing for an end result of slow data and call quality below that of what I'd deem "desirable" (yes, I went there). Still, for a regional carrier that charges $69.99 per month, it's acceptable.

The HTC Desire is not a perfect phone; it runs an outdated version of Android, its battery life is something I wouldn't wish upon anyone, and its camera is one of the worst I've seen on an Android device this year, but overall, I feel that its pros greatly outweigh its cons. It feels great, looks great, comes with minimal bloatware, and zips along at paces faster than most other Android 2.1 phones. Besides, the update to FroYo is coming, even if we don't know when. There's no beating around the bush here, folks; HTC and US Cellular have themselves a mighty fine device, certainly the best the carrier has to offer and also one that's passed the test of time, which is more than can be said for certain other devices.