I’m not exactly sure how this strange pairing was birthed, probably somewhere in a boardroom of extremely bored HP executives… but it looks like HP’s Tablet plus Printer combo is drawing closer to readiness for release. I thought one of the driving tenets of the tablet revolution was to obsolete printers, but obviously HP disagrees – hey, they’re the experts. The Zeen, as it’s appellated, is a 7-inch capacitive tablet which will be bundled in a $400 package with the C510 PhotoSmart eStation. While thankfully printing does not appear to be the Zeen’s sole raison d’être, it is certainly one of the devices included features, with a Printer and Coupon app appearing in the app drawer. Can’t wait to see that in action. 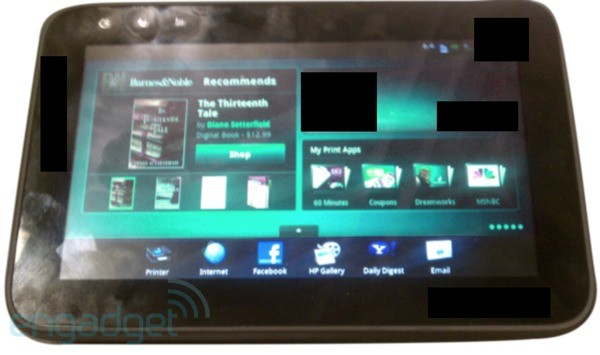 With HP having just bought Palm/webOS, it’s hardly surprising that HP and Google aren’t exactly cuddling up to each other to work together on the Zeen Android tablet, so it’s a shame that the device will not be shipping with the full Google experience – there doesn’t appear to be GMail or the Android market on the device; instead is an arsenal of Yahoo! connectivity, as well as Facebook, the Barnes & Noble Nook store, and a handful of video-on-demand streaming solutions.

The user interface mimics the TouchSmart interface seen previously on HP’s all-in-one desktops and touchscreen laptops. It’s nice to see a tablet UI for once that is not simply stretched out stock Android, and the layout makes more sense for the larger greater room for on-screen content that a tablet’s size affords. On the other hand, there are some questions in my mind over the hardware design – an enormous bezel and rather oddly placed navigation buttons.

It will be rather saddening if this is the future that webOS is consigned to. Let’s hope not, for the sake of innovation in the mobile OS space.

The Zeen/C510 is expected to be released some time around late September, excepting any delays in production.

The Latest In The World Of Android Hacks: Jailbreaking A PS3 With A Nexus One

Froyo ROM Leaks Out For the Acer Liquid