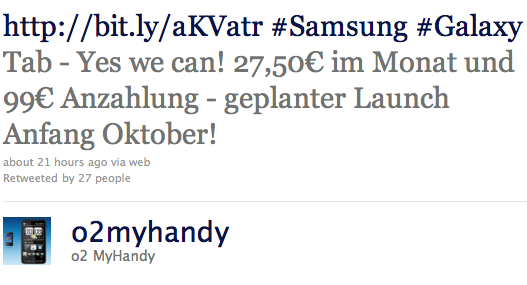 Having a hard time reading that? Here's the English translation:

Those are two really nice prices, both monthly and upfront, especially when you take into account the fact that Apple will happily charge you $629 for a 16GB iPad with 3G capabilities, even if O2's monthly price is a bit higher than AT&T's minimum $15 per month (for 200MB worth of data) plan, and even a little pricier than their other iPad plan, which sells for $25 per month (2GB worth of data). Then again, we don't yet know what this plan gets you, so the possibility that it will all end up being a better overall deal than AT&T's plans (unlimited data, anyone?) is still out there.

While all of these off contract prices do seem a bit ridiculous, the good news is that Expansys also claims that the tablet will ship starting Monday, October 11, which is just a little over a month from now. As always, the sooner, the better!

Verizon To Release Samsung Fascinate September 9 For $200 On Contract, Buy One Get Any Free