It's hard not to love Moore's law, isn't it? Global Foundries and ARM revealed some details on the upcoming Cortex-A9 CPU architecture during GTC, and boy does it look like a hardware nerds dream. Thanks to a massive die shrink coupled with other architectural optimizations, word has it that the A9 will boast huge performance gains and significantly less power draw.

The majority of the benefits come simply from the die shrink. Modern chips (such as the ubiquitous Snapdragon CPU's) are based on the ARM Cortex A8 series, which is manufactured on either a 65nm or 45nm process. The A9, on the other hand, checks in at just 28nm; diminutive indeed. To simplify things, smaller transistors provide three main benefits: 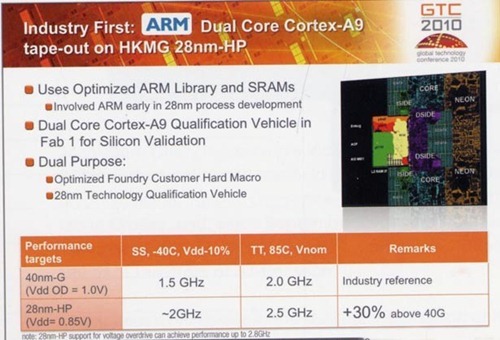 Texas Instruments has already licensed the chip, and 20nm chips are expected to appear in 2013. While no date has been provided, I'd say based on that info, it's possible (but certainly not definite) that we'll see the A9 in 2011.

Rumor Has It Samsung Galaxy Tab Will Go To Sprint

Verizon To Release Samsung Fascinate September 9 For $200 On Contract, Buy One Get Any Free