It seems to be the trend nowadays that you know everything about a device before it even gets properly announced, and while it makes for plenty of blog-fodder, it sort of spoils the fun of waiting for new things to come out.

Anyhoo, TmoNews just got their hands on the pricing scheme for the upcoming G2, HTC’s eagerly anticipated landscape slider. Calling the pricing “Exactly what everyone expects it to be”, TmoNews posted a photo of an internal T-Mobile document, showing the G2 to be $499.99 off-contract, or $199.99 with (presumably) a new two-year agreement and a $50 MIR.

The prices match up exactly with that of the Samsung Vibrant, giving T-Mobile customers a difficult, but enviable choice at the top-end of GSM Android. 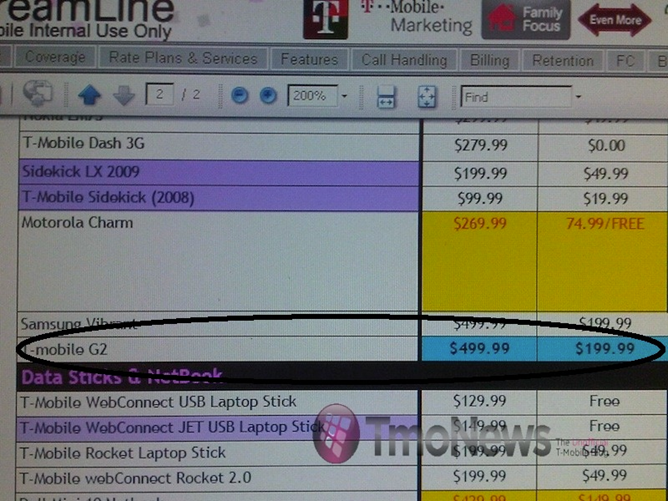 The G2 is rumoured to be coming out on September 29th, courtesy of another screengrab from TmoNews, and we’ve already seen some nice, official promo shots of the handset, so everything is finally coming together for those of you waiting for a true successor to the original G1. We even know all about its internals, and the software it’ll be running. All that remains to be seen now is whether its keyboard will match that of the Epic 4G…