Panzer Panic is a game that has been available on the Android Market for quite some time now in the form of a paid version, costing €2.99 (approx. $3.80 at the time of writing). Although it offers a really cool experience, some users clearly thought that the price was a little too steep, as it has only managed between 1000 and 5000 downloads in the Market. In response to this, the developers have just released a free version, which is exactly the same game, but with an advert on the bottom of the screen.

If you haven’t played the game before, the concept will most probably be familiar to you already. You control one or more tanks on a large piece of paper and in each level cope with oncoming enemy tanks by shooting pellets of ink. 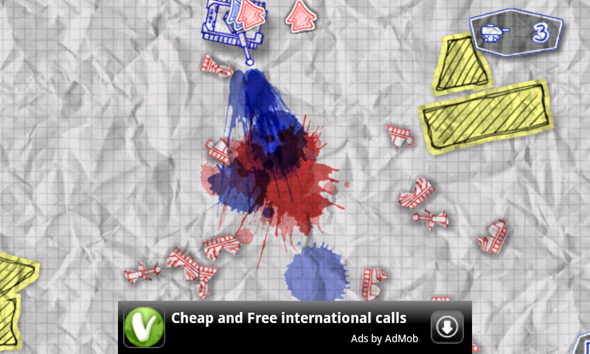 This is where the fun starts. Every time you fire a pellet of ink (think of it as paint balling, except with small tanks and a piece of paper), it leaves a splatter on the paper, and by the time you’ve completed a few of the levels, it looks like your battlefield is turning in to the art of a 3 year old. I also find it pretty therapeutic watching ink shatter tanks into little pieces, but maybe that’s just me (Note from Artem: nope, me too).

The controls are really easy to learn, and simple to use, which is always a bonus on a small screen. To move a tank, drag your finger in the direction where you want it to go, and then when you’re in the perfect position to open fire on the enemy – yes, I really do take it that seriously – flick your finger away from the tank and towards the enemy. With any luck, your pellet of incredibly strong ink will disintegrate the other tank and you will be able to advance on to the next level. I love the idea of a game like Panzer Panic, because it doesn’t take itself too seriously, and just offers a bit of fun which can soon turn into addictiveness.

The game supports 1 or 2 players - in 1-player mode, you play against a computer in real time and in 2-player mode, each player alternates after using up a certain amount of "action/movement"points.

Panzer Panic has gorgeous and very smooth graphics - big props to its designer.

Here's a video of the gameplay on an Apple device. It looks pretty much the same as the Android version:

If you want to try the game out for yourself, it’s available for download from the Android Market at either €2.99, or free for the ad-supported version. Now go shoot up some tanks!

Official Pictures Of The T-Mobile G2 Leaked, Take A Look At That Glorious Keyboard