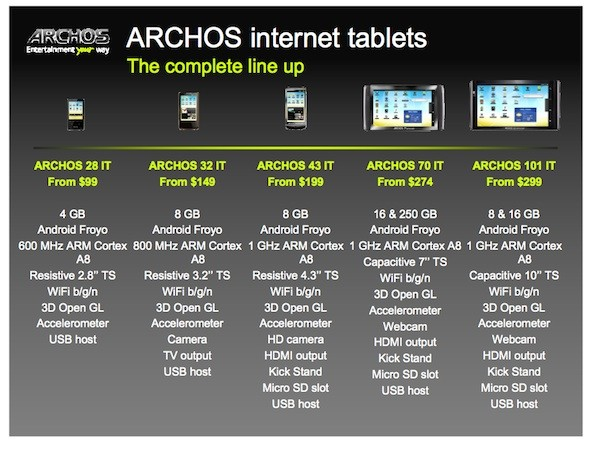 With the tagline "How do you tablet?" Archos has just introduced: 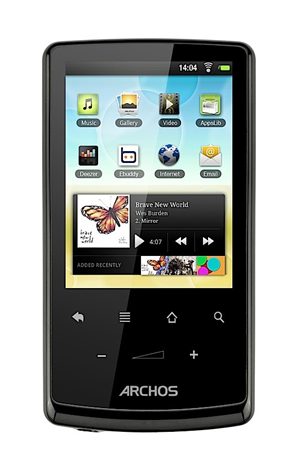 Archos 32 steps up both the price and the specs, with a 3.2" display, 8GB of storage, an 800MHz Cortex A8 processor, and a rear camera that is capable of recording 720p HD video. As for pricing and availability, you're looking at an (reasonably) affordable $149.99 price tag and a mid-September release date. 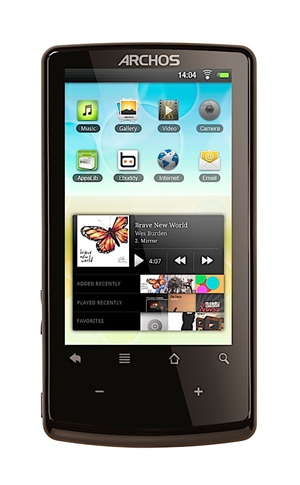 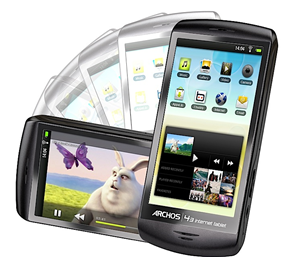 Archos 70 is a tablet with a 7-inch capacitive (and yes, that means the previous members of this list are all stuck with resistive touchscreens) display, a thickness of .4", a weight of 11 oz, a front-facing VGA camera (though the rear camera has been abandoned for this model), and even USB and microHDMI ports. As for pricing, you can look forward to coughing up $279.99--still a decent price for a tablet, if you ask us--starting sometime in mid-October. 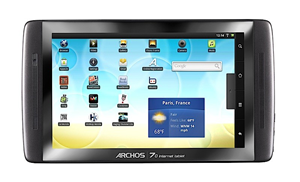 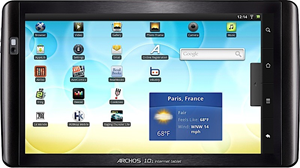 The prices seem to be appropriate, all of them will launch with FroYo, and, from what we can see, the 101 may be a legitimate Galaxy Tab competitor. Then again, you never know what a device will be like until you actually get it in your hands, so we wouldn't recommend pre-ordering just yet... unless, of course, you find the press release after the break too much to resist. 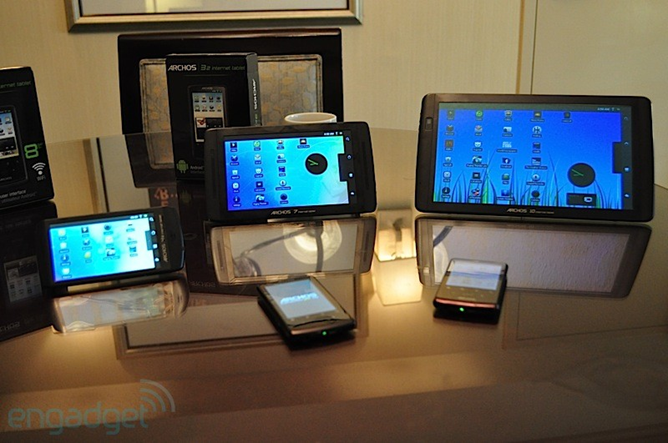 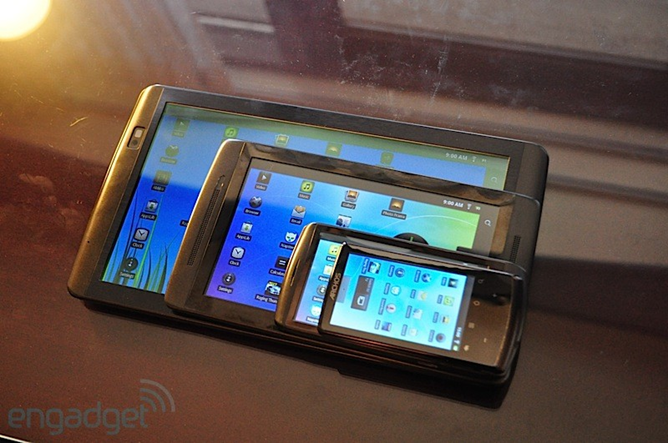 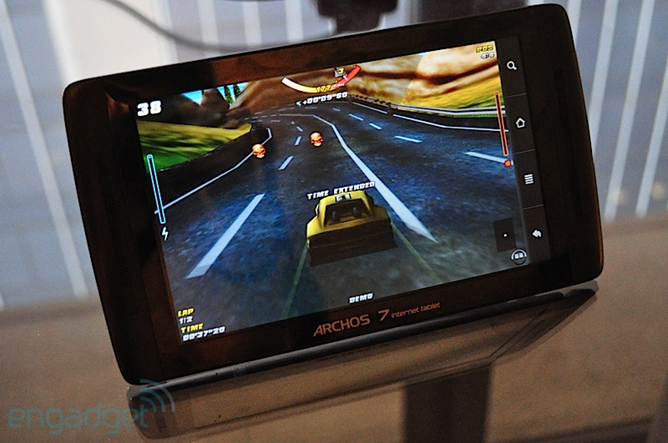 From the ultra affordable and ultra portable ARCHOS 28 and 32 Internet tablets, to the multi-media marvel ARCHOS 43 Internet tablet, and the wide screen ARCHOS 70 and 101 internet tablets, ARCHOS' new range offers a combination of super-fast web-browsing, games, eBooks, social networking and other apps alongside HD video and music in a very slim-line design.

The ARCHOS 101 Internet tablet offers a unique design including the latest technology. This tablet has the advantage of a connected Android device that adds very fast web browsing and HD multimedia experience. The 10.1'' high-resolution screen is nestled in a very slim and light form factor tablet, enabled through a patented construction process.

The ARCHOS 28 Internet tablet is the first Android player below $100. By introducing a connected device at such a low price, ARCHOS revolutionizes the portable music player segment.

ARCHOS has developed four unique Android applications for video, photo and music with the support of 3D cover animations to allow users to keep a digital experience as simple as it should be.

A patented construction process, which uses an over-moulded PVD stainless steel structure, has enabled ARCHOS to redefine the tablet form, with devices that are smaller, thinner and lighter, making the tablet even more portable. The ARCHOS 101 Internet tablet is just 0.47" thick and weighs only 15.87 ounces, yet offers a crisp, high-definition 10.1" capacitive multi-touch screen.

With the adjustable kickstand, users will always have the best position to tap out emails, view a movie or enjoy the photo frame application. Using the device is designed to be both easy and intuitive.

A built-in webcam on the ARCHOS 70 and 101 Internet tablet means users can make video calls to family and friends.

In addition, a new feature in the Android settings menu means that the devices can also be tethered to a 3G phone via Bluetooth or USB for Internet connectivity when on the move.

Hi-definition multimedia at your fingertips

With ARCHOS' heritage in high-quality portable multimedia players, the Internet tablets offer consumers a full multimedia experience, with 720p HD video playback as standard, whether from a user's movie collection or streamed from YouTube. Unique Android multimedia applications designed by ARCHOS will allow the end user to enjoy all his multimedia content.

The HDMI TV output offers the best Android, multimedia and games experience on your TV. The tablet can be used as a game pad for your TV thanks to the built-in accelerometer and 3D open GL technology so users can enjoy a unique gaming experience.

The ARCHOS 43 internet tablet also sports a 2 megapixel HD camcorder to capture video and photos than end user can share on the web or on the HD TV screen.

The first connected MP3/MP4 players below $100

The ARCHOS 28 and 32 internet tablets feature music, video and photo applications, developed by ARCHOS, enriching the user experience with smooth browsing through the album covers and with widgets added to the home screen to give instant access and control to media. These unique Android applications allow users to amplify their digital experience.

The devices are also compatible across the major music and video formats, so there's no need for conversion or the inconvenience of dedicated software support. A simple drag and drop from your computer is all that's required.

The A32 internet tablet also includes a camcorder for video and photos to capture the greatest memories. Users can upload videos and pictures to the web or share via social networks.

With WiFi connection, users can surf the Web at the speed of a computer thanks to the speedy processor. The Internet browsing is also faster than ever; users can adjust the page size of an article with a simple double-tapping or rotating the ARCHOS and the screen will flip into place to display the entire page's width. There's also an email application so you can stay in touch with all of your friends.

Applications to make a player what users want it to be

The AppsLib store, with free and paid apps, will make sure you access and directly download custom sized Apps to fit your lifestyle. Games, books, music, social media, recipes, news and sports are now a click away.

ARCHOS tablets can become an eBook reader, with literature classics, the latest magazines or favorite comics available to download and read wherever you go.

A wide range of games, using 3D graphic acceleration, are also available. From the classic Sudoku to the fast-paced racing games, user will immerse themselves in fun games enjoying the comfort of sharp and large screens or using the device as a steering wheel.

ARCHOS 28 internet tablet
Available in September at 4GB, with a recommended retail price of $99.99.

ARCHOS 32 internet tablet
Available in September at 8GB, with a recommended retail price of $149.99.

ARCHOS 43 internet tablet
Available this fall at 8GB with a recommended retail price of $199.99.

ARCHOS released the first pocket-sized HD-based MP3 player with the Jukebox 6000 in 2000 and since that time has revolutionised consumer electronics devices. The company invented the portable media player in 2003 and was the first to bring television recording, wireless and touch screens to Portable Media Players. ARCHOS have also introduced the Internet Media Tablet range -- the 5, 5g and 7 -- offering users instant, uncompromising access to the internet, media content and TV. Established in 1988, ARCHOS has offices in the United States, Europe and Asia. ARCHOS is listed on Euronext Paris, Compartment B, ISIN Code FR0000182479. www.archos.com.