With the US release of Sony’s Xperia X10, we were given taglines such as “smarter is coming”, but with Android 1.6 running the show, smarter may be a little bit of a loose term for now. Those of us on the other side of the pond may be in luck pretty soon, however, as Sony Ericcson’s UK Twitter account posted a reply to a user stating that Android 2.1 is due for release in the UK “before the end of September this year.”

If this information is indeed accurate (and we sure hope that it is), then X10s all over the UK may finally get the upgrade to Android 2.1 from Android 1.6, which has plagued the device since its release. 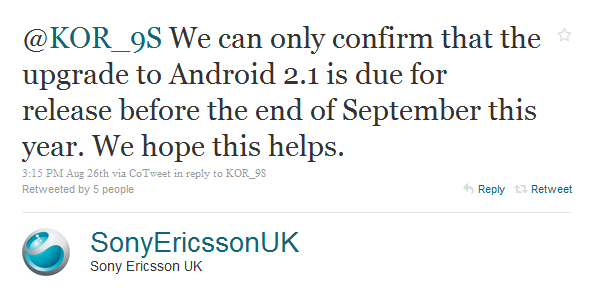 What isn’t quite as clear yet is if this is a UK only upgrade, or whether users outside of Britain will be able to upgrade too. Either way, we’re sure to find out in less than 30 days time, so we’ll keep you updated as more information finds its way on to the net!

Are you an X10 user wishing that your device was running Android 2.1, or are you quite content with your 1.6 device? As always, make your feelings / rants known in the comments!