A few months back (before it launched), we found out that the Droid X would have limited HDMI functionality - mainly, it would only work in gallery mode. Today, we stumbled upon a new app on AppBrain called Real HDMI that seems to remove that restriction. Check out the item description:

Warning: This only works for the Droid X.

Finally you can enable and disable the HDMI port on your Droid X. Use your favorite video players, applications and emulators on your big screen TV or Stereo.
- HDMI Video/Audio Out
- Car/Media Dock Modes 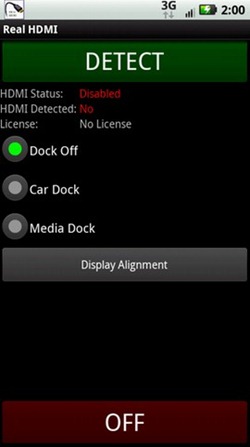 User reviews for the app are overwhelmingly positive - it has about 4.8 stars (out of 5), and is in the 100-500 downloads range. The only downside of this $1.99 app thus far, besides not being free, seems to be a few minor bugs, but that's to be expected with a new app.

Update: check out this useful FAQ from the app developer:

FAQ:
#1 When I enable HDMI output I see video on my TV but the screen on my phone appears frozen?
Unfortunatly at this level of the game when I enable HDMI output all video content is being piped out the HDMI port. The last "frame" or graphic that was displayed prior ot the switch remains on the phone. It might be possible in the future to enable "dual view" but at this point I believe that might require a rooted phone and even then am not sure how to accomplish it yet.
#2 Will this work on the EVO 4G?
Short answer, NO. The EVO uses an entirely different HDMI controller and diffiferent architecture for controlling the HDMI controller and graphic out. They use what appears to be a custom VideoView control as well as permission checks inside the phone. While I have been asked to look into it by the EVO community I don't own an EVO phone so its not my top priority at the moment. But will be looking into it over the next month.
#3 Why is my home screen sideways on the screen?
Well if you think about it your phone's display is 852high by 480 wide. So to display a portrait screen it has to be sidesways on your TV. Why its always portrait regardless of phone position.....I really don't know. Am just enabling output to the HDMI port not controlling how things are rendered.
#4 Why does HDMI out turn off when the Real HDMI application closes?
I have to keep a connection open with the HDMI controller service to keep the display operating. Technically I could shutdown my app and leave it on, but that could leave users in a bad state where they can't get screen back to displayin on the phone. So for now the app watchdogs the service and when the app shuts down it shutsdown HDMI out. In a future version will be going to an APP/Service architecture that will start a HDMI management service in the background. So my graphic control app, widgets or other application can control the HDMI on/off.
#5 Why is my home screen only taking up the center part of the TV?
As I mentioned in #3, I am just enabling the HDMI out not controlling the screen or what is output. Android doesn't really have support for multiple displays, so when the screen switches to a higher resolution display the applicaiton don't receive any kind of notification that they should resize. VideoView and SurfaceViews will render to full size of screen automatically. But most other "views" in applications just don't look for the larger screen so they end up staying with the default. In the future will be posting a short tutorial on how developers can easily take advantage of the larger screen space if they so wish.
#6 The "Dock Buttons" don't seem to do anything on Froyo (2.2)?
There was a change in permission management in Android 2.2, and some interesting behavior changes. This is keeping my app from enabling certain features. Just became aware of it and am looking into a solution. The dock buttons continue to work on 2.1
#7 When Viewing video with Application ____________ the screen has bars or lines on it, why?
Application sometimes use a combination of absolute and relative placement of objects on their applicaiotn screen. Enabling a higher resolution display can cause some interesting problems for applications engineered to assumptions on maximum screen size. This can cause things like the black bars that would normally appear to left and right of a standard def video, to appear in middle of screen on high def tv. This isn't something I can't fix, as its a a manifestation of the screen layout chosen by the application designer.
#8 Applications some times are "less smooth" or "Jittery" when displayed on HDMI out
This is caused by the fact that you are asking the droid x to render a 1280x720 image at 60fps to the tv, when before it was rending 852x480. This puts additional load on the display controller. Am looking into putting together a guide on maximizing display performance when using HDMI out.
#9 Can I output audio only to HDMI and not video? (for music on my stereo)
At the moment its video + audio out at the same time. In theory it is possible to split this up. And am looking into it in the future.
#10 Sometimes while watching a video the HDMI will just turn off?
This can be caused by the sleep settings on your phone. I could be going to sleep or the other possibility is the phone's application manager has killed Real HDMI which shuts down the HDMI. This should be remidied in the near future.

Here's the direct link to Real HDMI in the Android Market that you can scan with your favorite barcode scanner app: 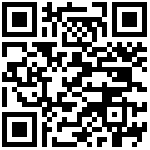 Samsung Hits A Milestone: Over 1 Million Galaxy S Devices Shipped In US