The team behind Buzz Voice, a service that converts posts from your favorite blogs and news sites into speech, and previously available exclusively in the Apple ecosystem, has been working diligently for the past few months to release a version for the Android OS. The good news finally came this past weekend, when Buzz Voice for Android was officially announced.

Buzz Voice on the Android platform brings a couple of new features over its Apple counterparts, including an Android Radio which features Android Police, among other great Android sites. Check out the full announcement below:

If you’re not familiar with BuzzVoice, our service lets busy people *listen* to over 1,600 of the web’s top news and blogs on smartphones and other mobile devices.

It’s sort of like “Pandora for news”, and it’s specifically designed to make it faster, safer and more fun to keep up with news on the go (The real sweet spot is in the car, train, gym, etc.).

To date, people have streamed over 2 million stories via BuzzVoice.

We’d love to hear what you think in the comments below, or, feel free to email [email protected]

Check out these screenshots, featuring Android Police on Buzz Voice in action. Pretty sweet, isn't it? 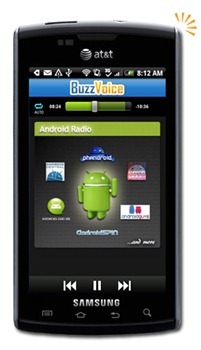 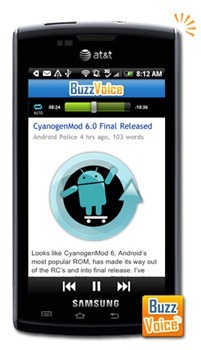 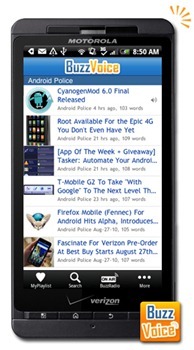 Buzz Voice does have 2 monthly subscription levels: free and paid. The paid subscription offers a few features the free one doesn't but isn't necessary to enjoy Buzz Voice functionality. Here's an image comparing both: 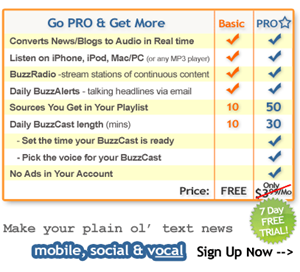 Here's the direct link to download Buzz Voice. Note the app costs $4.99, which is exactly why we have the giveaway (see next section)! 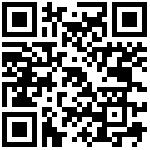 The Buzz Voice developers were kind enough to sponsor a giveaway of 10 free Buzz Voice licenses.

Entering the contest is really simple - just make sure you complete the steps below.

There are 2 parts in this step: complete either one of them to be eligible or both to double your chances of winning.

Buzz Voice for #Android is here and @AndroidPolice is giving away 10 free copies http://bit.ly/ap-buzzvoice

In the comments below, tell the Buzz Voice developers your favorite blogs and news sites you will be listening to using Buzz Voice.

Again, steps 1 and 2 are required to enter.