A little over a week ago, we discovered the Droid Pro, Droid 2 World Edition, and a Motorola tablet (codenamed "Stingray") sitting around in Verizon's internal systems. Since then, there has been endless speculation about whether the Droid 2 World Edition and the Droid Pro are one device. Although there was never enough evidence to support that claim, there was plenty of evidence mounted against it (for example, why would there be two model numbers in Verizon's internal system that had the description of "Droid or D2"?) 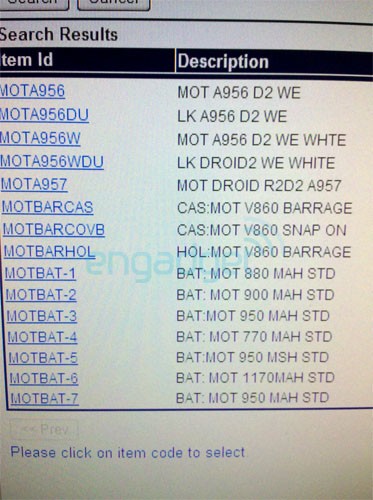 Today, an Engadget tipster has debunked that rumor with another screenshot (above) that clearly identifies the A956 as the Droid World Edition (WE) and the A957 as the R2-D2 edition of the Droid 2. This also confirms the rumors that the Droid Pro and the Droid WE are one device, as the Droid WE is the only one that shows up in this screenshot.

While it may be disappointing to learn that the Droid Pro won't be some super-awesome dual core machine coming later this year, we suppose it's only to be expected since the Droid X - Verizon's current flagship device - is still relatively new to the market. Then again, there is that rumored HTC Merge with its 10MP camera set for a November launch date. There are exciting times ahead, folks, so stay tuned for more news on the Droid WE and other upcoming Android phones as it comes in!

Viewsonic Android Tablet Images Spotted, May Just Be A Rip-Off

Amazon Gets Aggressive - Samsung Epic 4G For $200 With New Contract