Looks like Amazon isn't going to wait a few weeks to drop the price on the Epic 4G: they're already offering it for $200, $50 less than the other big-name stores. The device won't ship until launch (August 31), but they're offering free two-day shipping - albeit, with a minor disclaimer:

The new Samsung Epic from Sprint is now available for pre-order and should begin shipping on August 31, 2010. Due to demand for this device, you may experience a slight shipping delay. 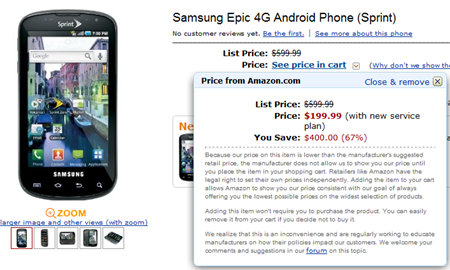 "See price in cart?" Oh Amazon, you're so sneaky.

I suppose that's to be expected with such a major launch, but it's hard not to wonder if Sprint wouldn't be doing a little better right now if they could actually keep up with the demand for their hottest hardware. Hell, this thing might turn out to be even harder to get than the EVO - a fair number of reviewers judged it to be a better phone, and it seems that all reviewers had a pretty high opinion of it.

Thanks for the tip, Mark H.!