In what is best described as a roaming tower defense game, Guns'n'Glory, by HandyGames, allows you to play as bad guys who attempt to ambush settlers and steal their gold. Starting off as a lone gunman, the more settlers you kill, the more gold you’ll gain, which in turn will allow you to hire more bandits to help you out in your evil ways.

Available for free on the Android market, Guns'n'Glory offers a unique style of gameplay by melding several genres into one title. On one hand you have a layout similar to a tower defense game and on the other you can move your guys around at any point in time should the need arise, adding an element of action to the mix.

As previously mentioned, this game is a blend of genres. You’ll need to move your guys around to ensure you ambush all the settlers each stage; if any escape you will lose health (shown in the sheriffs badge) and once you reach zero, it’s game over. As you gain more money, you can (and will need to) hire more bandits to join your little outlaw crew, some of which just shoot their guns, while others lob sticks of dynamite, or shoot cannons at the settlers. 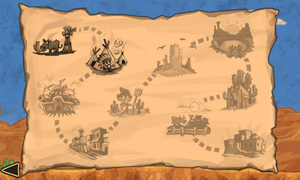 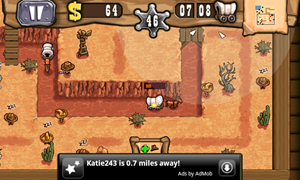 Guns'nGlory is played using touch controls. To move any of your guys around just place your finger on the screen above them, keep it there, and slide it around to make the character walk. Once they are in place, just lift up your finger and they will start shooting. To buy another member of your outlaw crew, just tap on one of the sleeping people around the stage and tap the checkmark to pay them.

The controls were quick and responsive to touch. The only problem with them is that it is sometimes hard to see where exactly your guy is walking to, since he is covered by your finger. At times there may be an obstacle to walk around but you will run into it anyways just because you can not see where you are going.

All the sounds in this game suit it well, from the gun shots and explosions to the background western movie style music. It certainly compliments the game nicely and helps keep you in the mood. 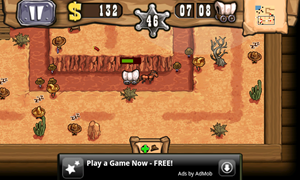 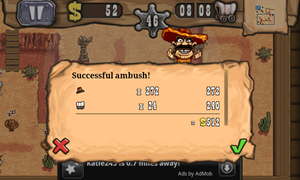 Speaking of the graphics, they are very well done and polished. The animations were smooth and all the elements of the game are nicely detailed. The entire game is a top-down perspective and you know exactly what path the enemy (settlers) will be taking.

There is something enjoyable and gratifying about shooting and robbing innocent settlers first thing in the morning while drinking coffee. This is an excellent game that will appeal to anyone who likes fast-paced action games or tower defense style gaming, as it contains both.

Between the great graphics and sounds, easy controls and the ability to pick up and play where you left off, this is a great and entertaining game to add to your collection, even if it does only have ten stages. The only other issue with Guns'nGlory is that, although it is free, it is ad supported and the ad is inconveniently placed at the bottom of the screen, making it easy to accidently press. 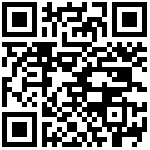 Response To A Response: More On Google's Android Licensing Service

Google Finance Website Gets Mobile: Revamped For Android (And A Certain Other Mobile Operating ...