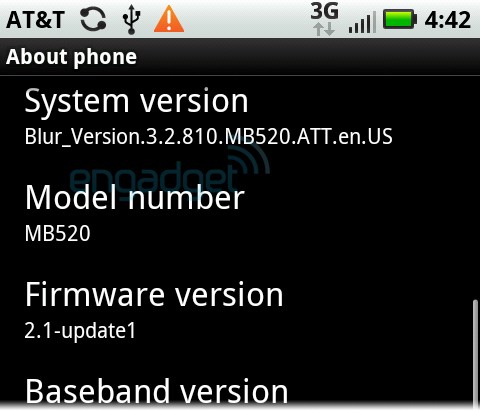 Been thinking that AT&T's Android offerings are rather...how shall we put it....measly as of late? Sure, the Dell Streak and the Samsung Captivate are nothing to scoff at, but the latter is a member of the Galaxy S family, a line of phones coming soon to all four major carriers (as well as a few regionals), while the former is a 5-inch phone/tablet hybrid currently running Android 1.6 that, in all probability, won't be getting FroYo for at least a few months.

Enter the Motorola MB520 Kobe, a device that, according to Engadget's latest tipster, sports specs like:

The specs aren't all Engadget's tipster managed to grab; he/she also procured several screenshots of benchmarking apps, including Linpack and Quadrant, the former of which clocked it at 6.319 MFLOPS - not bad for a phone running Android 2.1 - and the latter of which gave it a score of 1036, a score which only the Nexus One (running stock FroYo) and the Droid X surpassed. The camera might not be anything special, and it's disappointing to see it launching with MotoBlur on top of Android 2.1 , but still, it looks like an all-around decent phone. Who's ready for Motorola to put out a serious non-Verizon Android phone?