It’s been a while coming, but Adobe’s Flash Player 10.1 has now ditched its Beta status. Released today to coincide with the ongoing Adobe conference in San Francisco, Flash Player 10.1.92.8 is available in the market for compatible devices, namely Nexus Ones running Froyo. As with all Market releases, there are some quirks with the releases availability, so don’t be surprised if it’s not appearing for you even though it should be. Hopefully the other Froyo-running devices out there will be seeing Adobe Flash Player pop up in the market over the next few days and weeks, and all you risk-takers out there with CyanogenMod 6 ROMs and ARM v7 processors should be seeing it available for download too. 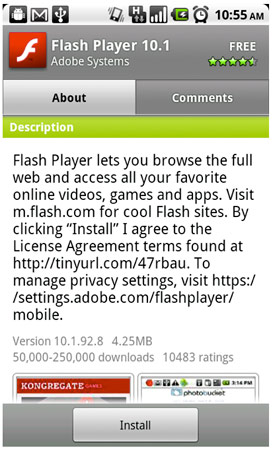 Alternatively, you can go the manual installation route. Over on DroidForums, the APK for the update has been posted. [MediaFire][MegaUpload]

Users are not reporting dramatic changes from the Beta 3 version, and it is still unclear whether or not hardware acceleration is being used.