Yesterday, we spent the day at Adobe HQ for their Adobe for Android Summit. We heard from Anup Murarka of the Mobile and Devices team, Paul Betlem for Flash, Aaron Filner for AIR, and N.J. on Flash platform tools.

Anub started off with some numbers: 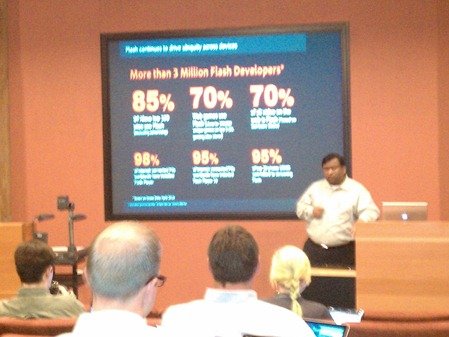 Thanks to its wide distribution and variety of usability - whether for an app, a game, a movie, or something else - Flash is just about everywhere. Let's delve into some specifics.

Adobe argues that modern smartphones should have support for the full internet - and that means support for Flash. 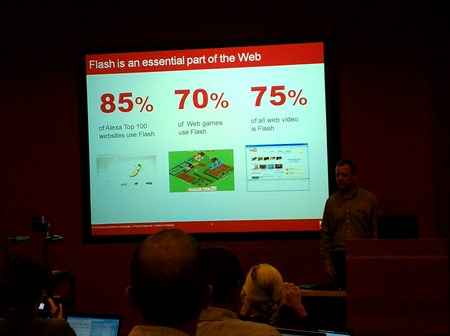 One of the key points Anub made was that despite the version number only being a minor increase, Flash 10.1 is a pretty major upgrade. In their own words, 10.1 was rebuilt from the ground up. They went into development with 4 broad goals: 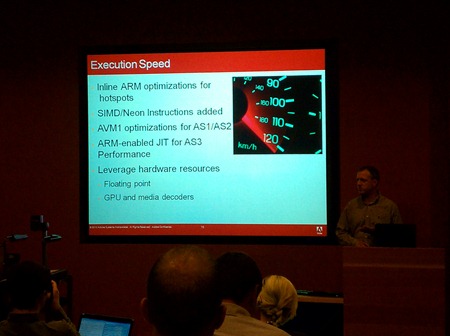 Adobe worked with a lot of major hardware and software players in order to ensure that not only does everything work well, but also efficiently. Thus, they have focused on CPU and memory usage while balancing for battery life. And while they are currently happy with the way things run (again, in terms of performance and battery life), they will continue to work on it and improve it. 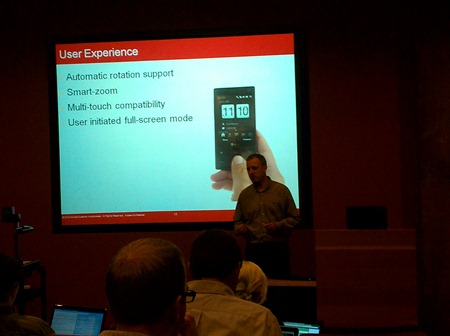 The focus was to increase support for a variety of inputs, as well as more complex inputs - such as multi-touch, gestures, and accelerometers. 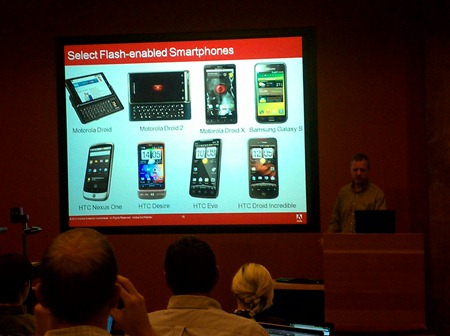 The third major focus going into development of Flash 10.1 was maintaining backward compatibility with older versions of Flash while allowing for future growth; they want content to "just work." In other words, they wanted to keep support for older hardware (for example, ARM11) while keeping the platform powerful enough to be able to utilize newer high-end hardware. 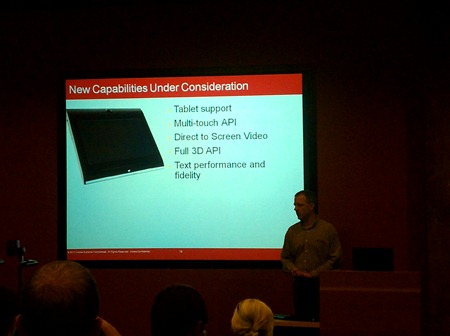 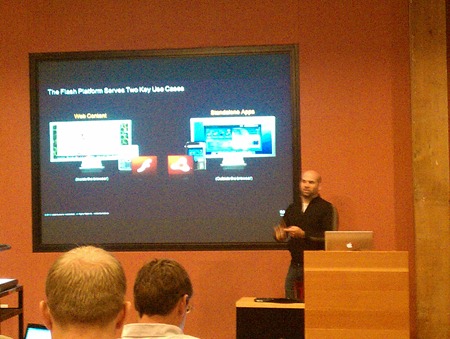 They started off the discussion of AIR by summarizing the difference between AIR and Flash. To paraphrase it (rather inelegantly): Flash is for the Browser, AIR is for the desktop. 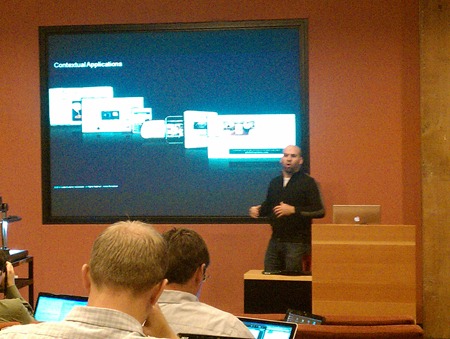 AIR has two primary goals. First, they want a quality and uniform experience that is maintained regardless of hardware platform. Aaron demoed an App built in AIR on the PC, then pulled the same app up on his phone; it looked nearly identical on both devices, and functionality and usage was essentially the same. They're not looking to port apps, but rather provide a platform that's flexible enough for the same code to run the same way across different devices. 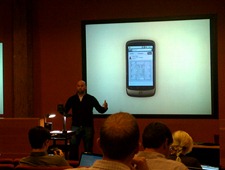 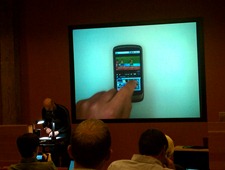 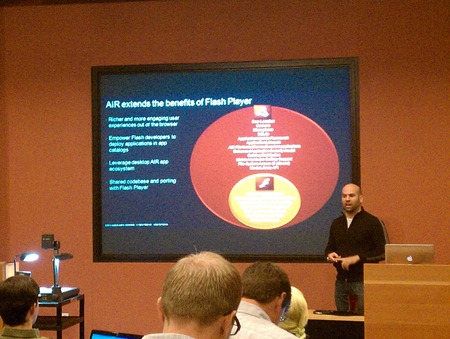 The second major goal with AIR is to earn and keep devs. They're sharing a lot of the framework with Flash, so that devs familiar with Flash should only have a minor learning curve. Further, whenever possible they used existing Android mechanisms. 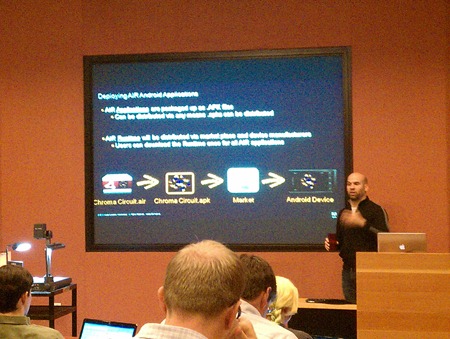 Oh, and Android is the first platform to support AIR. Go team. 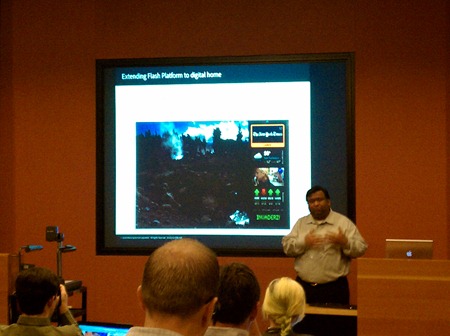 Sunday night during the meet-and-greet, a few of us (David and Artem included) were talking about what was coming today, and the conversation eventually turned to Google TV. My opinion was (note the past tense) that computers-for-the-TV (Such as Google TV or Apple TV) didn't have enough value to achieve widespread success. We haven't seen the Google TV presentations yet, but I have to admit that their presentation was rather convincing.

I don't think "digital home" is any sort of formal name - rather, I think it's just what they are calling the system - but for lack of a better term, I'm going to run with that monicker. Here goes:

Digital home is eponymously named - it's basically the coming wave of smarter, more connected appliances - such as TVs. They showed off mockups of the system, and it actually looks pretty slick. Their research shows that a fair percentage of users use a computer while watching TV - the idea here is that they can move some of the PC functionality to the TV.

Adobe and Google see a need for Google TV because of the huge variety in current entertainment devices. For example, TVs are based on a wide number of basic hardware, OSs, middleware, and UI diversity. As such, there is a method of unifying devices, each which has its own proprietary system.

Not only that, but people watch a lot of web video - an average of 22 hours per month per household. Further, most people tend to use internet-connected devices while watching TV. In other words, they're already on their phone or laptop while watching TV, and Google TV provides them with the ability to simply bring that functionality to the TV.

As a result, there are three main focuses for Google TV (or Adobe's digital home):

The hardware demoed today was not the Logitech Revue - it was some prototype Intel-driven box. It ran Android 2.1 with Flash 10.1 integrated into Chrome. Google is planning on deploying Android 2.2 at some point.

Adobe demoed gaming and video playback, as they run Flash. Both seemed to work well, even on the pre-production hardware. YouTube videos seemed to upconvert and showed no visible signs of compression. Similarly, gaming was... well, basically the same as it is on the PC - Flash-based games are Flash-based games.

Adobe's suite of tools for easy developing are referred to as the Flash platform tools. There are three parts to the tools:

Flash Builder and Flash Catalyst are grouped together into a package called Flex. Flex improves upon the basic capabilities of ActionScript, and the ultimate objective is to make developing easier. There are three main goals to accomplish that:

The conference didn't really reveal a ton of new information, but it did keep us updated on the progress Adobe is making, especially in the mobile and Android world. We caught some more peeks of Google TV in action (and boy does it look slick - but more on GTV later). The other interesting topic they touched upon during the conference was gaming on Android. We did not really see any new details on that front, but it was good to see they are still working on Flash and AIR for Android, and optimizing performance. Similarly, it is good to know that between the natural growth of Android and Google's substantial investments, gaming on Android could be primed for growth.

Google TV still strikes me as being a questionable investment. While it looks very slick even in the pre-production stage and it has the potential to be useful, I question whether it will be successful. Personally, I would rather browse the web or play games on my PC - or even my phone - rather than my TV, even if it means I am multitasking. The other benefits provided by GTV - such as the unification of entertainment devices - may be useful for those people with the money and/or the nerd-driven need, but for the layperson it is dubious functionality.

Then again, maybe now is finally the time to bring computers to the living room. Who knows - only time will tell.