Our friend Daniel Ruby, analyst for ad firm Chitika, has released a new tool for tracking Mobile usage stats. The page is chock-full of goodies (at least, for those of us nerdy enough to dig stats). The most interesting highlights:

The EVO 4G numbers are fairly impressive - at 8%, it’s higher than the HTC Desire and HTC Droid Incredible, both of which stand at roughly 6% (6.16% and 5.88%, respectively). The growth is also impressive considering that the device commanded 2% just a few days after release. Other analyst reports we’ve seen suggest Sprint may have picked up nearly 50,000 postpaid customers from the EVO alone - impressive for the company, especially given its history of bleeding customers.

Even better are the Droid X numbers - already it accounts for 4% of the market. The number is likely to increase, despite the fact that the Droid 2 just launched, as well - after all, most reviews considered the Droid X to be one hot piece of kit, and the Droid X and Droid 2 are both natural upgrades for Droid owners (of which, again, there are many). 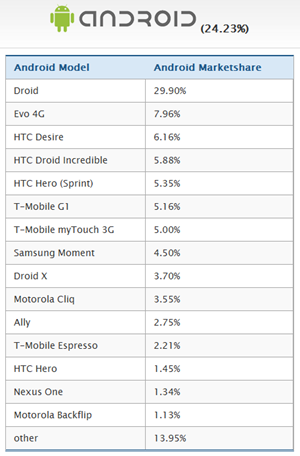 However, undoubtedly the most interesting (and likely to be the most controversial) part of the report is that iOS fragmentation is bad. Considering how much of a stink the world made over Android fragmentation a few months ago, it’s funny that the iOS numbers went unnoticed. Take a look at the most recent figures for each: 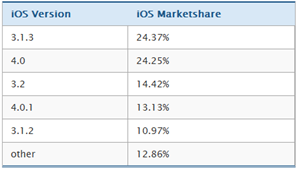 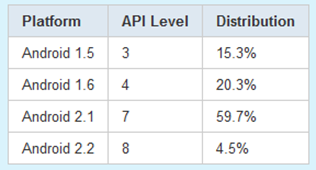 The important caveat here is that the Android numbers are straight from Google, while the iOS numbers are from a third party. Still, even as an estimate, it’s rather eye-opening - even when you account for the fact that Apple restricts iOS upgrades to newer hardware.

Vodafone Rolling Out Vanilla (!) Froyo To HTC Desire In Next 7-10 Days Dell Thunder Spotted In The Wild, Running Android 2.1, Will Be Available Before The End Of The Year