It’s hard to say if it called for a full-blown press release, but Samsung today issued a statement announcing the availability of official Samsung-branded accessories for Galaxy S devices in the US.

What kind of goodies can users expect? Well, as the title suggests, Samsung has produced some very shiny photos of a desktop dock, a car dock/charger, and a spare battery charging system (they’ve apparently caught on that many Android users go through multiple batteries in the course of a day). You can see them in all their glossy black plastic glory below: 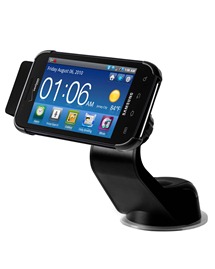 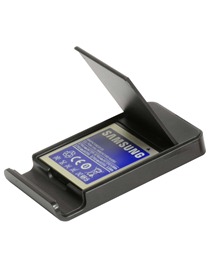 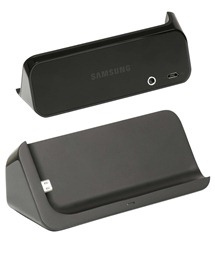 Tomfoolery aside, these are necessary accessories for a phone as robust as the Galaxy S; the car and desktop docks/chargers in particular. A spare battery charger is a novel idea for a phone, and I would certainly be interested in one for charging my Nexus One’s 3 spare batteries (Aside from, you know, using another Nexus One as an electric juice box).

I’m uncertain as to my feelings on the design of the car dock. Fact aside that it resembles a disembodied robotic arm grasping your phone as its last act of cyborg defiance, it looks a little tall for some cars. While it clearly swivels, it does not appear the “arm” can be lowered – the phone can simply be tilted and turned on the “hand”.  Of course, it is just a photo.

Samsung chose for the Galaxy S to sit in a landscape position on the desktop dock, and for phones with large screens I think this should be the standard. As the Galaxy S does not have charging contacts, both the car and desktop docks provide power directly through the micro-USB port. Hopefully this won’t end in woeful tales of snapped connectors becoming commonplace.

Samsung is also touting their new desktop dock app for use with the accessory – Desk Home. Similar to other desktop dock apps found in MOTORBLUR, Sense, or even vanilla Android, the Desk Home app brings your alarm clock, music, weather, picture gallery, and brightness controls onto one dedicated docking home screen. Samsung’s app provides movie playback as an additional functionality, but it’s hard to see the usefulness of such a feature, given you’re usually out of reasonable movie-watching distance if the phone is docked on your desk.

Samsung also introduced a charging “kit” that includes a spare battery, a spare battery charger (which also has a stand for your phone - don’t ask me why), and an extra wall charger. Pricing on all of this fun stuff remains a big question-mark at the moment, as does availability. 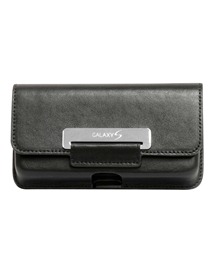 Also, Samsung casually dropped that US customers can expect the WMG160 media gateway device to be available soon. This piece of hardware will allow you to push (stream) your music, movies, and photos from your Galaxy S via WiFi to your DLNA-compliant HDTV/media center device. The WMG160 has been available in Europe and the UK (and presumably South Korea) for some time. Given retail prices in those markets, US customers can probably expect it to sell for $60-80.

The full press release, below:

DALLAS, August 11, 2010 — Samsung Telecommunications America (Samsung Mobile)1, the  No. 1 mobile phone provider in the U.S., today announced a line of premium accessories for the Android™-powered Galaxy S smart phone portfolio. The lineup of premium Galaxy S accessories, including a convenient desktop dock, vehicle dock and backup battery charging system, will provide users with an enhanced mobile experience for each of the Galaxy S smart phones.

The Samsung Galaxy S accessory lineup includes a small, compact desktop dock providing consumers an easy-to-use option to view their favorite movies, listen to music, display as a digital picture frame and use the desktop speakerphone when making hands-free calls while at a desk or in a home office. The Galaxy S desktop dock, which also doubles as a charger, allows for useful application downloads and internet browsing features such as Google Search™ by Voice, which allows users to speak their search query. Users can download the Desk Home application from the Android marketplace by searching for “desk home Samsung”. The Desk Home application can switch brightness levels from day to night and provides one-touch access to the Daily Briefing, alarm clock, music, pictures, movie gallery and local weather so that you can always stay up-to-date with daily activities.

The Galaxy S portable vehicle dock allows users to mount their device to a car windshield or dashboard and display turn-by-turn instructions for a safe, hands-free GPS navigation experience. Users can receive and display the latest traffic alerts, location-based information and activate the Google Search™ by Voice features when the Galaxy S smart phone is in the vehicle dock. The lightweight vehicle dock rotates freely between landscape and portrait modes and is attachable to either the windshield or car dashboard. The vehicle dock also contains a micro USB connection to conveniently charge a phone while in-use.

The Samsung Galaxy S accessories lineup offers an affordable charging solution that includes three components such as an extra 1500 mAh battery, a spare battery charger with phone stand and a wall charger for charging your phone and spare battery separately. The backup charger is small enough to fit in a pocket, purse or briefcase to transport and protect a charged backup battery allowing users smart phones to always stay powered-up while on-the-go.

Customers can also personalize Galaxy S smart phones with multiple protective case options, available in a variety of colors, patterns and fabrics to fit the needs of each consumer’s personal style. Additional Galaxy S accessories include a three-pack screen protector set with anti-scratch, mirror, and privacy screens as well as the Samsung WMG1602 Wi-Fi HD streaming device. The Samsung WMG160 allows users to stream movies, music, and photos directly from a Galaxy S smart phone to an HDTV.

For more information on retail availability and a complete list of Galaxy S accessories, visit www.samsung.com.

2 Also compatible with other DLNA compliant devices such as laptops or cameras. Check device compatibility atwww.dlna.org/products.