A blurrycam shot of an unnamed HTC Android device running Android 2.2 (presumably... my Chinese is a little rusty) has been spotted over on the Android Hong-Kong forums (the irony is not lost on me: the picture was taken with an iPhone).

Although the device doesn’t seem to have any physical HTC branding, there is an “HTC Confidential” watermark on the screen of the device, and it’s running an HTC kernel. Some technical details are provided - take them with a grain of salt though: 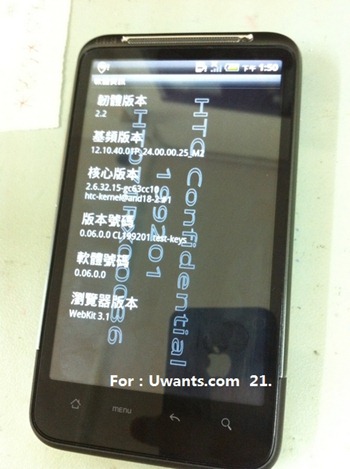 Other details are pretty light, but the device seems to be pretty similar to in appearance to the EVO, although it looks like it lacks a front-facing camera and sports a larger chin. Still, a very good looking device. Hopefully more details emerge soon.

Another One Bites The Dust: Original Motorola DROID Officially “Out Of Stock” On Verizon ...