What with the fuss that the KMart-exclusive Augen GenTouch 78 has been getting lately, it seems like an opportune time to release a budget-oriented Android tablet that is actually purchasable. MP4Nation.net, an online store with a penchant for Asian PMPs and audio players, has had its Nationite-branded line of products for quite a while now, and on their blog today they unveiled the latest addition : the Nationite MIDnite, a 7” tablet rocking the latest version of Android. It is based on the WITS A81e, and unlike the RocketFish tablet tweeted by Best Buy CTO Robert Stephens it has some pretty hard specs to pore over.

The MIDnite also has three hardware buttons on the front, power and volume keys along with a headphone jack and USB connectivity around the edges, a removable (!!) 3000 mAh battery and a kickstand. Other highlights include USB peripheral support via miniUSB to USB-A dongle and the ability to load custom ROMs. 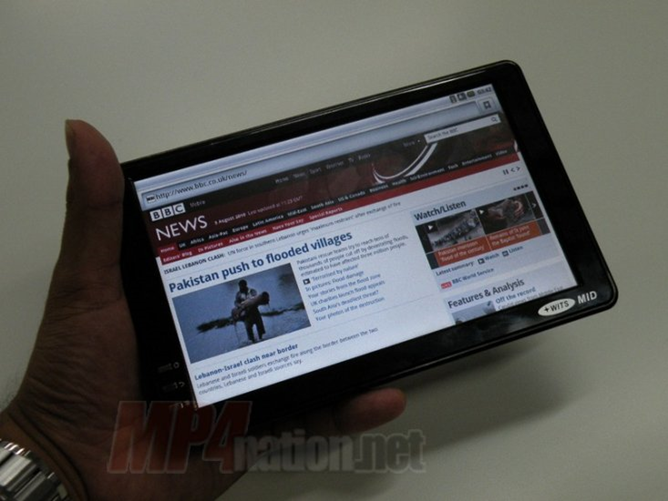 Browsing shown off on the WITS A81e upon which the MIDnite is based.

Sounds pretty enticing for two-hundred bucks, right? There’s got to be a catch somewhere, some corners cut… and there are. The biggest one is probably the use of a resistive touchscreen rather than the capacitive technology found on most smartphones and more notably the iPad. However, unlike the rather numb touch panel of the seemingly-extinct $150 Augen GenTouch, this resistive panel appears to actually be quite capable. As MP4Nation founder Raz says in his video demo “I don’t think anyone’s going to be complaining about the responsiveness”, and having seen some user-interface demos it’s hard not to be impressed by the device’s performance.

Another downer is the lack of an accelerometer which strikes out any chance of playing motion-controlled racing games or the like, and means you will probably have to look for a software solution to rotate the screen manually. A final niggle is the lack of a camera and a microphone, but at this price point there are always going to peripherals shaved to save on cost . Perhaps the USB host mode touted on the MIDnite product page will enable external cameras and mics in the future, as well as (hopefully) keyboards – something that would be great to use with that included kickstand.

The final bit of bad news is that the software isn’t ready. It may seem ironic, but MP4Nation’s MIDnite is struggling with audio and video playback on the current build of its Froyo ROM. With just over two weeks to the August 23rd release, there is still time to sort out these issues, and it is good to know that WITS, the OEM, is committed to providing updates for the A81e/MIDnite tablet.

We still have a couple of questions about the hardware that we’d like to find out, and if we get more info about the internals of the MIDnite we’ll be sure to let you all know. In the meantime fire away with your insight, desires and misgivings in the comment section below.

* The MIDnite also includes a Bluetooth chip but it has yet to be supported in firmware. There is also  an optional GPS module which is so far not enabled.

Mr. Blurrycam Provides Picture Of HTC Froyo Device - Could Be The Desire HD