When Apple released a widely criticized video of a Droid X death grip last week, Motorola suddenly found itself as a target of what could essentially be interpreted as a smear campaign. Here is the video for those who managed to miss it:

Of course, the video followed a similar smear aimed at HTC's Droid Eris during a recent Apple press conference focused on antennas and reception. Clearly, Apple is not singling anyone out while trying to defend itself. The only problem is it's not comparing apples to apples (oh, the puns) - in fact, I'll leave the explanation to this very sane article by PC World.

Motorola knows the ridiculousness of Apple's claims and it's ready to defend its image. Starting today.

At Motorola, we believe a customer shouldn't have to dress up their phone for it to work properly.

That's why the Droid X comes with a dual antenna design.

The kind that allows you to hold the phone any way you like to make crystal clear calls without a bulky phone jacket.

For us it's just one of those things that comes as a given when you've been making mobile phones for over 30 years. 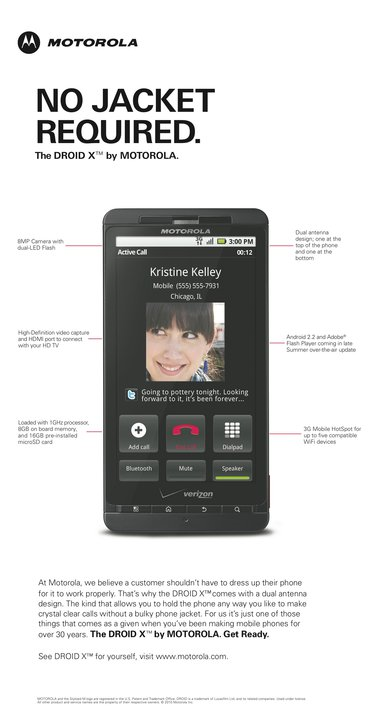