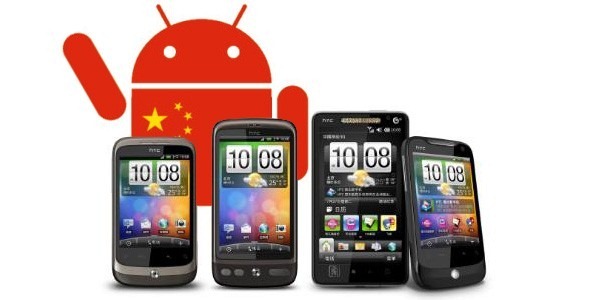 Unfortunately, it appears removal of Google branding from Android devices (including the Market) in China will continue with these new phones. This is a requirement for Android phones running on China Mobile, which is the dominant (and state owned) carrier in China. This means that while Android will likely keep gaining ground in China’s booming smartphone market, it won’t mean new customers for app developers any time soon. And so, this news becomes a little bittersweet.

Specs on the new Tianyi are not available, but the exterior looks like a hybridization of the Wildfire’s size, the Nexus one’s bottom face and trackball, and the Incredible and EVO’s top bezel/speaker. It’s actually a pretty nice looking device, at least aesthetically. If specs arise, we’ll be sure to post them.

HTC’s press release, pasted below, makes zero mentions of Google or Android, instead just noting that all four phones come with the HTC Sense UI.

HTC Launches Its Brand in China, Unveils First HTC-Branded Phones for China
HTC Strengthens Relationships With Mobile Operators and Distributors in China
BEIJING, July 27 /PRNewswire/ -- HTC Corporation, a global designer of smartphones, today introduced its brand and first HTC-branded devices in China. As part of its mobile operator focus, HTC also announced a partnership with China Mobile to bring future HTC phones to market and announced a new distribution partnership with China's largest electronics distributor, GOME Electrical Appliances Holding Ltd.
"We are proud to introduce the HTC brand in China and look forward to bringing a fresh customer-centric smartphone experience to consumers in China," said Cher Wang, chairman of HTC. "Together with our strategic partner Dopod, we have introduced many state-of-the-art phones over the past few years in China. HTC's passion for innovation and its commitment to delighting people around the world are what drive us to improve the overall mobile experience in big and small ways. It is this customer-centric approach that has driven HTC's global leadership position and has differentiated us."
With a broad portfolio of innovative smartphones, HTC's design philosophy is rooted in the belief that one size does not fit all and focuses on creating an intuitive and personalized mobile experience that is based on a unique people-centric approach. HTC has become a leading mobile brand focused on simplifying how people communicate by emphasizing improvements to little things that deeply impact the experience people have on their phones. HTC's entry into China represents its continued growth and highlights the broad demand for its unique smartphones and the increased visibility of its brand globally.
"The pace of mobile innovation globally is moving at an extraordinary rate, and we are excited to be bringing many of our most innovative phones to China, the largest and most sophisticated mobile market in the world," said Peter Chou, chief executive officer of HTC. "HTC was founded with a vision for mobile convergence and a passion for innovation that has established us as a globally recognized mobile leader."
HTC designs some of the world's most popular smartphones and provides a unique opportunity to make each person's phone experience uniquely their own. Initially coming to China are HTC's newly unveiled smartphones with HTC Sense: The HTC Tianxi, HTC Tianyi, HTC Desire and HTC Wildfire. HTC Sense is a unique user experience focused on putting people at the center by making phones work in a more simple and natural way. This experience revolved around observing and listening to how people live and communicate.
The industry has recognized HTC's contributions through a variety of awards including Fast Company's 2010 Top 50 Most Innovative Companies and MIT Technology Review's 2010 50 Most Innovative Companies. The GSMA also recently awarded the HTC Hero as the "Best Phone of 2009." For more information on HTC's history of industry firsts, visit www.htc.com/quietlybrilliant.
HTC has been partnering mobile operators in China since 2003 and has delivered many cutting-edge, intuitive smartphones in China. HTC is devoted to developing TD-SCDMA-based phones, the first wireless standard in China. TD-SCDMA(TD) marks an important milestone in the innovation and growth of China's mobile industry and has spurred development of the cross-strait mobile sector.

What are your thoughts? Is a market-less Android better than nothing? Or is Android’s philosophy of openness being compromised? Let us know below.