Have you ever seen one of those annoying comments on the Android Market promising the riches and all the Android apps in the world for a low-low monthly price of $10? Sites like that pirate paid games and apps off the Market and then distribute them illegally, pocketing all the revenue. That's modern day warez at its finest.

Whether it was because of Android's openness or Google's notoriously poor focus on the Market, no DRM or licensing protection was available in the SDK for developers to utilize; so unless you rolled your own licensing scheme from within the app (which had a side effect of circumventing Google's payment system and therefore netted developers a whole lot more than 70% rev share), your app was easily "piratable".

Well, developers have had enough, and Google has eventually listened. An hour ago, Eric Chu from the Android team announced an official licensing service for Android applications. 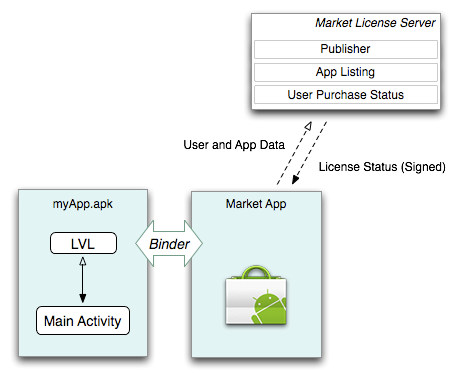 The service will allow application developers to implement a license status check in their apps - an app would query the licensing server and get back a response stating whether it had been purchased through the Market or not.

This simple and free service provides a secure mechanism to manage access to all Android Market paid applications targeting Android 1.5 or higher.

At run time, with the inclusion of a set of libraries provided by us, your application can query the Android Market licensing server to determine the license status of your users.

It returns information on whether your users are authorized to use the app based on stored sales records.

What If Google (riiight) Or You (that's more like it) Are Offline?

Now, those of you who remember the Ubisoft Assassin's Creed DRM disaster can breathe a little easier - Google is well aware of the problems that can occur when you don't have a working connection or their servers are offline (which is unlikely but possible). This is why they will support both of these schemes:

My guess is someone would need to either love getting 1-star reviews or be really-really paranoid to use the 2nd scheme, so most apps will stick to the safe first option.

To help you get started with a Policy, the LVL provides two fully complete Policy implementations that you can use without modification or adapt to your needs:

Here are some points to keep in mind as you implement licensing in your application:

Today's announcement is a solid step to reducing Android app piracy. Google has listened to developers' concerns and stepped it up. A more serious Market, happier, more confident (and properly paid) developers = better apps and games for all of us.

Now, devs, don't screw this up like Ubisoft did - we know where that 1-star button lives.

T-Mobile G1 Rides Off Into The Sunset