Recently it has been reported that Google plans to add carrier billing options to the Android Market. This is great news for developers, but it may be moot, as we’re getting reports that a lot of users are having issues downloading apps that they have purchased. When a user tries to purchase an app, it seems that the market is hanging while authorizing their payment, regardless of their checkout method (credit card or carrier billing).

This isn’t the first time that users have had issues with the market – just recently Google had to address the issue of applications mysteriously disappearing. If Google wants developers to take the market seriously, they’re going to have to cut down on these issues.

When going to the Android market and purchasing a game or application, you are taken to a screen asking you which method of payment you would like to use. At this point, you usually select the payment method, hit ‘Buy’ and wait for the app to download. Right now, though, once you click ‘Buy’ it will display that it’s “Processing Payment” but nothing will happen.

A prime example of this is the new Playstation Emulator for Android that was released yesterday. Just about every user who is trying to purchase this particular application is experiencing this issue. 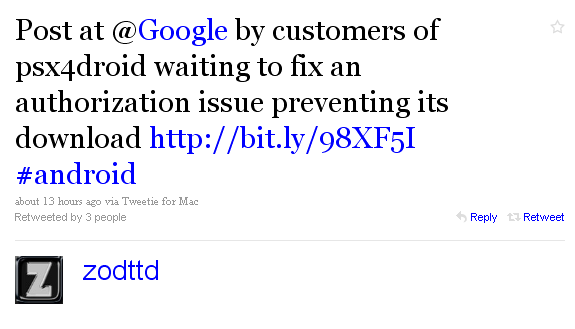 Is It Being Fixed?

As of right now, Google has not commented on the situation. Developers such as ZodTTD, who developed the Playstation Emulator, have contacted Google support and have received no answer. While Google is probably aware of the issue, they should be informing developers who are experiencing this problem that they are actually aware of it and trying to fix it.

This is a problem that can severely damage the already questionable reputation of the Android Market if not handled properly. Not only is it likely to upset developers who already have their apps on the market, it’s not exactly inspiring first time Android devs to publish their apps either.

At this point, all we can do is wait for Google to address the problem. If you are experiencing this issue, just be patient. There are several threads on the Google Support Forums about this problem. If you can not wait to buy a particular game or application, you might want to check some outside sources for Android related software such as SlideMe.org

How-To: Run Android On Your PC