On Tuesday, we posted that the first nightly (experimental) Cyanogen Mod 6 (CM6) build for the EVO 4G was released the night before. True to the name, CM6 has released a new build every night since, bringing bug and feature fixes. After a number of you posted comments saying that you were running CM6 without any problems (other than the known non-functional features), I decided to take the plunge.

The ROM still lacks a handful of features – such as 4G, FM Radio, and full MMS support. Still, it seemed that the number of bugs was pretty low and I was dying to switch to FroYo. This morning, my impatience won out, and I flashed it. 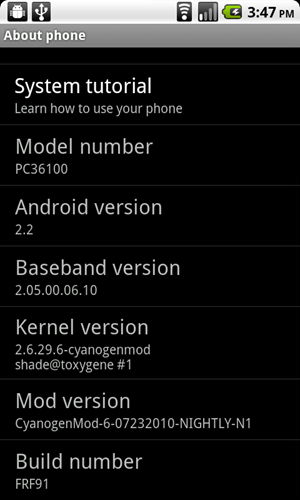 First things first: you can’t use this ROM if you’re rooted via unrevoked – it just won’t work. Sorry. I had initially used Toast’s method to do the first root (part 1), and then used SimpleRoot to do part 2. Either method works, as long as you do both parts. Personally, I’d suggest just sticking with SimpleRoot – as far as I know, it’s the same as Toast’s method, just automated.

Installation was simple, but I did have a hiccup. Following the instructions on XDA, I wiped Dalvik and Cache, then installed in the order it said: CM6, Radio, Google Apps. When I booted up though, my phone still had the wallpaper I had been using previously, and while I had the CM6 lock screen and taskbar, the rest of the screen was black and the phone was unresponsive. At David’s suggestion, I went back and did a full factory wipe, then Dalvik and Cache, and then ran through the process again – and it worked. All in all, the entire process took maybe 15 minutes total.

Once installed, my contacts all synced from my Google accounts, but wouldn’t link to my Facebook – I simply couldn’t add a Facebook account to the phone. As usual, the solution was to be found on XDA-Devs: 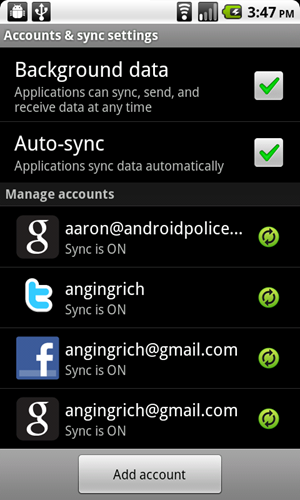 That fixed the problem, and all my contacts’ pictures were pulled onto my phone. Last up, I reinstalled all my apps without a hitch.

I’ve been using the phone pretty intensively since then – about 7 hours ago – and I’m incredibly impressed. FroYo is definitely noticeably faster than Eclair – especially the browser. As an informal estimate, I’d say the browser is at least twice as fast. As everyone knows, FroYo is a Linpack monster – my scores went from about 7 MFLOPS with Fresh 1.0.1 (Eclair) to about 39 MFLOPS on CM6 (FroYo) – and 41 average after overclocking the CPU to 1.15 GHz (the highest I’ve hit is 45.876). 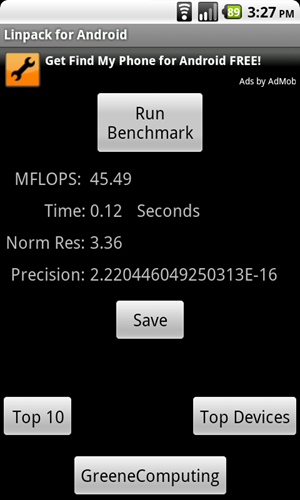 I’m a fan of minimalism, so ADW Launcher + FroYo is a huge step up from Sense to me (although I have to admit, I did enjoy the HTC Sense weather/clock widget). After about an hour of putzing around, I think I’ve nailed down my homescreen setup – down to 3 screens, organized (at least to me), as well as some other interface tweaks: 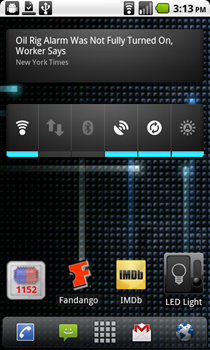 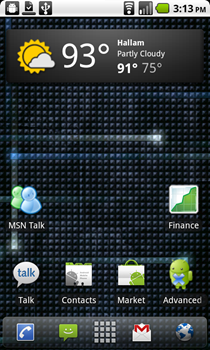 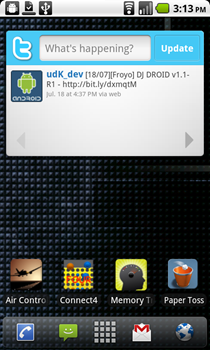 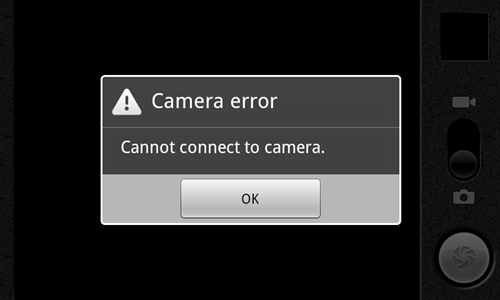 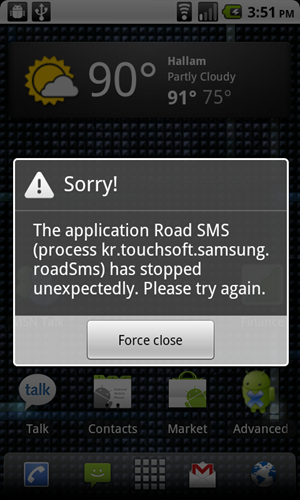 The camera issue is the only real problem there, but it’s certainly not a crisis for me. In fact, the bigger issue for me is that battery life seems to be worse than it was with Fresh – but still better than stock. It’s hard to say how much shorter it is, but I’d estimate my battery is draining 30% faster – to the extent that I would be somewhat worried about making it through work (8 AM to 5 PM) without having to juice it up a bit. Still, all in all, I’m definitely very happy I took the plunge.

Despite this still being a nightly build, I can’t help but recommend that people experimenting with ROMs (or who are hesitant about flashing this) give it a try. From what I’ve read, you can just flash each new nightly ROM without wiping – but I can’t say that from experience (yet).

Minor Update: Cyanogen just tweeted the following: “The battery-eater “feature” of CM6 for Evo should be better now.”