We here at Android Police know how important apps are as a part of the overall Android experience. We also know how notoriously difficult the Android Market is to navigate. With these two things in mind, we decided to introduce the Android Police App Of The Week.

Every week, we'll take one app that we think is a cut above the rest, and give you an in-depth look at what we think makes it exemplary.

Like the idea of Craigslist? Don’t like actually using the website (especially on your phone)? Or like the idea of having a more powerful Craigslist with features such as notifications, favorites, and saved lists of searches? Craigsnotifica provides a sleek interface and powerful tools to make Craigslist a joy to use on your Android device, and I’ve even come to prefer it over Craigslist on a desktop or laptop computer. Some of you have probably already heard of this app; Craigsnotifica is no stranger to publicity. But Craigsnotifica continues to improve. More options have been added in recent releases, and other options have been streamlined to make the Craigsnotifica experience more user-friendly. Here’s a QR code: 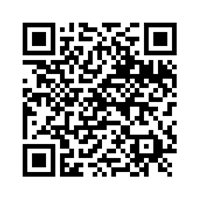 What makes Craigsnotifica so awesome? Like any great application, Craigsnotifica balances interface simplicity with feature richness. Craigsnotifica’s clean, friendly UI is (in my opinion at least) self-explanatory, and nearly any user can start utilizing the app in seconds as they desire, as shown below: 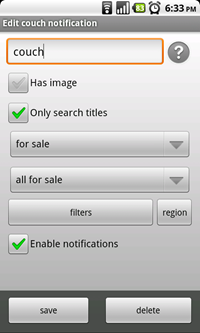 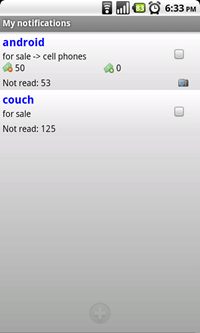 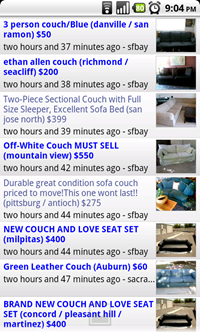 While it’s easy to see that Craigsnotifica offers all the search functions of the Craigslist website, the extras are probably the most important part of the app.  I have assembled a short list summarizing the superpowers of Craigsnotifica:

Certainly, the list goes on, but here are some visuals illustrating the aforementioned features: 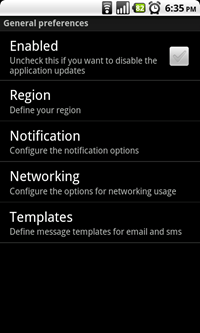 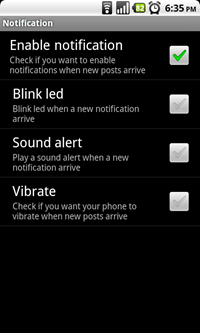 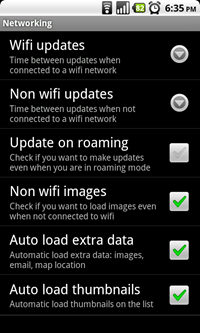 The one thing Craigsnotifica remains unable to do (and it is a big one, mind you) is post listings. While there is a “Post On Browser” shortcut in the “More” option of the menu, it’s a polite gesture more than a feature at this point.

But, a big plus for Craigsnotifica lies in the helpfulness of its developers. A short while back, I reported a bug in the app, and received a very humble, apologetic response in a matter of a few hours from the application’s lead developer. I was pleased enough with the developer’s response that I sent along screenshots  of the issue and my own praise for the application. In the next release (a couple days later), said bug was fixed. This is truly exemplary behavior on the part of the developer.

Craigsnotifica is a prime example of an application that seeks not only to provide mobile functionality for a website, but to improve on said website using the Android application framework. This is what app developers should aim for, and many big names have already proven the success of this approach: Yelp, Twitter, IMDB and other apps are becoming wildly popular because they seek to go beyond providing basic functionality (an experience that parallels the web browser) to their users.

Craigsnotifica is one of many Android Police featured Apps “of the Week” to come, and we hope you’ll stay tuned every week to see what application we’re raving about!