Ever since Apple released its App Store on the (then) iPhone OS 2.0, a special emphasis has been placed on the quantity of apps. As other app markets arrived, the same metric of success carried over. The platform creators used the quantity of applications as a way to convince critics that their platform was popular and thriving and that prospective buyers could take comfort in the platform they were investing money.

Fast forward to 2010. The app market model has proved crucial in this smartphone arms race and Google itself just announced 70,000 applications in the Android Market. That’s great! There’s a diversified, quality collection of Android applications ready for discovery… right? I mean surely there are some throw away apps, but with Google encouraging development the cream always rises, no?

The problem with Google’s triumphant 70,000 Android applications claim is that it encourages the very throw away development that now clutters its market. Every market goes through cycles. If you’ve ever taking a college marketing class, you’re familiar with the product life cycle. At the beginning of the Android Market, the market introduction stage, the volume was low and the demand needed to be created. As demand was created, volume increased and money was made. As developers saw this money being made, they tossed their hat into the ring and made whatever application they thought would make them a few quick bucks. Google continued to encourage this as they believe a healthy platform means lots of apps. As the apps continued to pile up, the good apps became harder to find and new apps appeared to help you discover apps!

Take for example one such app, App Brain, and their recently released Android application usage numbers. They took a look at the top 10 installed applications on Android OS and the percentage overall of the 100,000 App Brain users.

They found that overall 64,500 (92%) of the apps were installed on less than 0.1% of phones. Pandora, the 10th most popular app is only installed on 1/3 of all App Brain users’ Android phones. These stats alone illustrate the issue facing Google today.

In the graph we added a few random sample apps to get an idea of what’s there. Further down are the official Twitter app, the official eBay app in the top 100, around place 300 our own popular Steamy Window app, and further down around place 1,000 the Gentle Alarm (a paid app) and around 5,000 a snow live wallpaper. 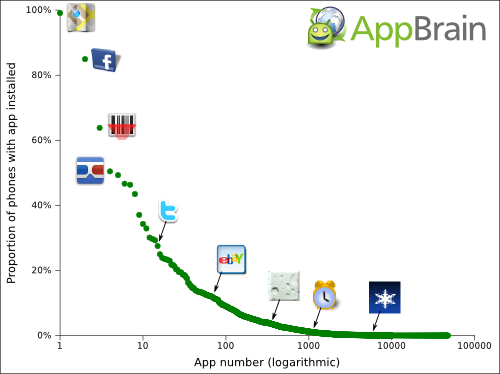 Now, it’s not fair to pick only on Android because the problem exists on iOS, webOS, Blackberry OS and even fledgling Windows Mobile. There’s a fundamental issue in mobile application markets right now that encourages pumping out software at a breakneck speed to make some quick money rather than focusing on building a well-thought out, functional application. Every platform has its gems but those gems are buried in a pretty deep pit of junk. Android OS does have a growing issue of copyright infringement with ringtones, trademarks, and even flat out stolen content that Google needs to address. Apple’s more strict App Store model weeds these from iOS, and Google should take note. Our own Artem Russakovskii tackled this very concept of ‘cleaning up the app store’ in March 2010 when there were only 40,000 Android apps and suffice to say, nothing has really changed.

First One To Quality Wins

Apple and Google can swing their swords all day about who has the most apps, but the truth of the matter is that apps are being added at a huge rate to both stores and very few of those apps are coming out of the store. Apple has tried to address this by featuring applications and revealing top 10 lists but developers still mostly rely on buzz and word-of-mouth to get noticed. On Android, the market needs even more work but this is where Google can catch and surpass Apple’s App Store model. By tying Android Market applications to user ratings, Google Buzz recommendations, Google search results and even custom brewed algorithms, Google has the man and machine power to create an application system that promotes the best and buries the worst. Google doesn’t need to stand at the gate and decide who gets in, that’s the Apple approach. They just need to build a quality rating system that allows the cream to rise and the curd to fall. If you’re looking for scraped Fox News RSS feed app, it’s still there but you’re going to find official Fox News application first. The first company to solve this issue, be it Google, Apple or even Microsoft, will win the smartphone war and will find itself with a maintainable, comfortable advantage over its competitors.

Android OS is hot, and with the continuing race of top-of-the-line Android devices, it only stands to get hotter. Developers are joining the ranks of Android developers and are eager to produce applications and Google should embrace them with open arms. But Google also needs to embrace a new market system that discourages these developers from producing quick, junk apps and focuses them on producing platform enhancing applications that continue to evolve the Android OS for versions to come. Google, stop touting the number of applications and start work on promoting the best quality applications to highlight the best parts of your great, open OS.

Google Helping U.S. Army To Launch Missiles From Their Phones

2x Tips: A Brilliantly Easy Way To Generate QR Codes In A Split Second... And An Even More ...