As we warned was imminent, the Nexus One is no longer available directly from Google, as supplies have been exhausted. Google.com/phone has been replaced with a simple message directing customers to a help center article outlining carriers that supply the device. Carriers will continue to sell the device until their own stocks are depleted. 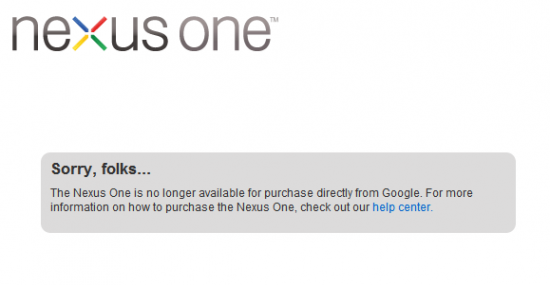 The Nexus One online experiment was considered a flop by most, but the phone’s hardware was a huge step forward for Android at the time and ignited a flurry of powerful, high-end Android phones that followed in its wake. It is still the only phone officially running Android 2.2, and remains formidable in terms of hardware even though it’s nearly 6 months old. This quote from Blade Runner says it best:

Tyrell: Would you... like to be upgraded?
Batty: I had in mind something a little more radical.
Tyrell: What... what seems to be the problem?
Batty: Death.

It’s been real, Nexus One.