EVO 4G is notorious for its battery problems - they've been plaguing the phone since before it even came out. I personally don't think the battery life is too drastically different from the Hero, for instance, but it's still pretty bad. Chances are that if you want to last through the day, you won't.

Update #1: These fit the HTC Hero too! (Thanks to @xMPoly for the tip)
Update #2: Fit the Droid Incredible perfectly as well! I wonder if it's good for all HTC phones.

There are countless battery tips out there, most of which either don't do anything or force you to turn off so much of your phone's functionality that you might as well buy an iPhone (ziiiiing?).

However, here's a more radical tip for you - carry an extra battery (or 2). Sprint's itself suggested it as a workaround for the battery issues. At suggested retail of $30-40 a pop, it is, however, not the cheapest.

There are countless aftermarket copycat batteries on eBay but who knows whether they are any good? Will they hold the charge or run out after a few hours? What is a good package? Well, we do, because we tested a specific set for the last 2 weeks, and it was brilliant.

While browsing AndroidCentral forums a few weeks ago, I saw this post covering the following set and being highly recommended by the poster.

I ordered and had them in my hands a week or so later.

I've been using them and I personally can't tell the difference between the stock battery and these ones - they last approximately the same, which was a huge relief.

Have a look at some photos I took: 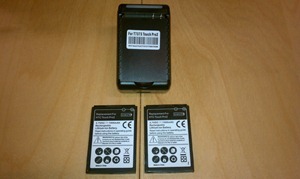 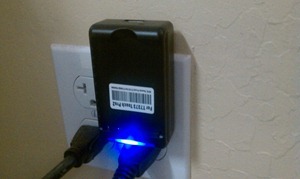 While I carry a USB charger with me at all times, it has felt incredibly satisfactory to be able to instantly receive a top-up to 100% in a few seconds. I am keeping both batteries in my laptop backpack that is with me at all times. The charge paranoia - it's gone.

Report back with your experiences.

Nexus One Officially Sold Out On Google Web Store