Smartphones are already commonly used in most workplaces, and now the folks at Google are working with military contractors to equip G.I. .Joes. Reuters is reporting that Google, Motorola and HTC have been working along side Raytheon, markers of the Patriot missile defense system, to develop software which could allow a soldier on the battlefield to gain important information via an Android OS device.

According to Raytheon, Google has helped push the limits of the phone and integrate features such as detailed satellite imagery, unmanned drone video and even tap into the Patriot missile system itself. This software could certainly allow the soldiers to gain all the intelligence they need to authorize a missile launch, and one day may even launch missiles from their phones. 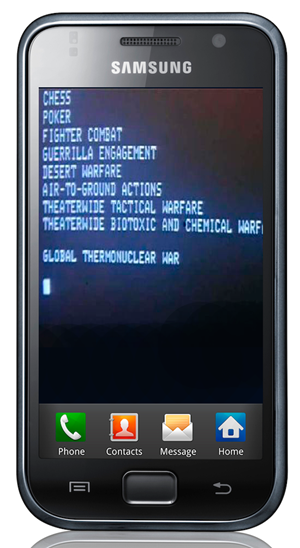 Raytheon is also integrating software encryption and ‘social warfare’ by allowing soldiers to interact with one-another by communicating through the application and flagging potential enemy targets. The U.S. Army, U.S. Special Forces and Indian military are all mentioned as possible users of this new technology. Google is clearly working to position its flexible Android OS against Apple’s iOS and are using its open model to tap into markets not feasible with Apple’s closed App Store approach. Either way, the thought of Global Thermonuclear War, from a Galaxy S, rules.

The Race To App Store Quality