This is a response to Cage Fight, Part 2: Why Apple Will Win The Smartphone War.

Pundits have been saying for some time now there’s no sense in trying to predict a winner of the smartphone war. Some say that the marketplace is large enough to accommodate everyone and that cage fights make no sense because the iPhone and Android phones cater to different audiences. Really? 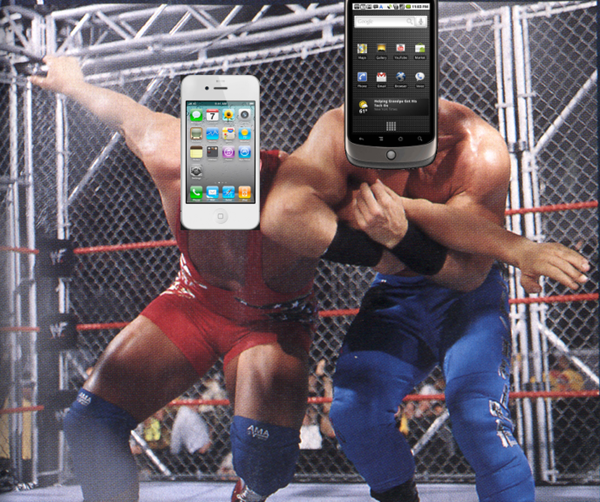 While some may not like labeling winners and losers, there are winners and losers in business every day. Windows and OSX cater to two types of people, but the obvious winner of the desktop war is Microsoft, with about 90% of the market versus Apple’s 5% of the market. The debate between Windows and OSX is over quality, not market share. But that’s not the only cage fight in town where the marketplace chose a winner. Blu-ray vs. HD-DVD, Compact Flash (CF) vs. Secure Digital (SD), Google vs. Yahoo, all the way back to VHS vs. Betamax, the market usually chooses a winner. A "winner" in this case is the one that commands a clear majority of the market, and can demand some sway in the marketplace. Sure, there are occasional places where multiple competitors can survive (IE vs. Firefox vs. Chrome), but even then, there is usually one dominant player (IE).

So between iPhone and Android, which will win? The iPhone 4 may be the 800 pound gorilla in the room when it comes to smartphones, but even when it broke all US smartphone sales records, it’s beginning to show some weakness.

Putting on a good prognosticator hat, I’m willing to call this fight and put a time line. I’m saying within 18 months the Android OS phones will have more market share than the iPhone. In other words, Android will win the smartphone war. Consider these points.

77% of the iPhone’s US sales were upgrades from previous iPhones. Almost eight of every ten iPhone 4 sales were replacing an iPhone. Great for Apple’s customer loyalty, but not a great statistic for iPhone’s growth. Apple has defined the iPhone as disposable technology (ever notice you can’t replace the battery), and this represents a ton of 3G owners throwing their phones on the scrap heap. Those that did change came mostly from Blackberry (6%). Yes, 3% migrated from Android to the iPhone. Not insignificant, but not large, either.

Of course Android is growing. It’s an operating system that’s less than two years old, so any growth would be an "improvement." However, nationally it’s growing at a much faster rate than the iPhone, which is more relevant. People are becoming interested in the Android "experience."

Even though Apple is the 800 pound gorilla in the room when it comes to smartphones, there’s an 8 ton elephant in the room that’s larger and quieter than Apple. In the US, Blackberry still has more market share than the iPhone, but they’re not a viable threat to Apple as they continue to lose users every quarter. Worldwide, however, the Symbian (Nokia) operating system roughly equals the market share of the iPhone, Android and Blackberry combined. Symbian (like Blackberry) is losing market share while the Android and iPhone are the only smartphones gaining ground, but the magnitude of Nokia’s worldwide influence makes it an amazing mountain to overcome.

Despite these points, Apple has set an amazing smartphone sales record selling 1.7 million units in three days. That is impressive by any standard. Compare that to the Evo’s three day sales of about 66,000 units, and it’s not even close (only about 4% of the iPhone sales). I realize those are just the Sprint sales, but even so, the figure pales in comparison. Even if we double or triple that sales figure, the Evo fares pretty poorly. Optimistically it’s 10-15% of the sales of the iPhone—not even close.

But the Evo isn’t the only Android game in town. There’s the Droid X which will be shipping about the same time that many will receive their iPhones, and comes with an amazing array of video functionality. Then the Droid 2, replacing the nation’s most popular Android phone, and probably coming in at a lower price point than the X and catering to an audience that doesn’t need all of the functionality of that super handset.

Samsung’s Galaxy S series which will find its way on each of the major carriers with possibly the best screen this side of the Retina Display. Then the Sony Ericsson Vivaz Pro, the Dell Aero, the Lenovo LePhone, and the list continues. These are just the “super phones.” I doubt any of these will come close to the iPhone’s sales record, but they don’t have to. Taken together, there’s more than a better chance that the iPhone will be dethroned.

On top of that, there will be Android phones that aren’t nearly as well stocked, but will suit some people who don’t need high end specs. Further, Android is making headway as a prepaid phone a la Virgin or Boost. The market will continue to innovate, and in the meantime, the iPhone crowd will have to wait until June 2011 to find out what their next upgrade will be. Will it be competitive with the current Android offerings? Probably, but I doubt we will be as wowed when Jobs dons the turtleneck and tries to sell the next “magical, revolutionary” technology that looks a lot like a current or upcoming Android phones.

Okay, Android might not even need 18 months to beat out Apple. It might have the market share today, even with a 1.7 million user three day upgrade bonanza. With over 160,000 new users every day, the day of reckoning for the iPhone may already be here. The iPhone’s massive sales can’t be ignored, but they also must be put in perspective.

There is an argument to be made for the profitability of Apple, so let’s make it. Apple is a very profitable company. What does that mean for the smartphone war? Well, it means Apple can afford to make a good product by hiring talented people. Apple ups the ante by having a lucrative app store, music store, and derivative products (iPad, dock, etc.) that mean Steve Jobs won’t be bumming change for a latte anytime soon. They are a company that has the financial clout to keep offering more iPhones.

In sharp contrast, some companies making Android products could very well be on the financial brink making a handset that won’t sell and spell financial disaster for everyone involved. Businesses are cropping up every couple of weeks trying to hobble together an Android answer to the iPad that look like they have the stability of the leaning tower of Pisa perched on a bowl of Jell-O. Android companies can and will fail. But if any particular handset or company fails (aside from Google), it means practically nothing to the Android OS. However, if the iPhone 4 fails (or the iPhone 5, or any subsequent model), chances are the iPhone is over even if Apple survives.

But profitability doesn’t always predict success. Another profitable company is IBM. They made a very popular computer, the IBM PC—you might have heard of it. I’m guessing most people have a PC compatible machine now. I’m also guessing most people don’t use an IBM, but probably use the derivative operating system that computer ran, Windows. In its day, IBM computers were very successful. Now, not so much. The operating system migrated away from IBM and reached critical mass because it had competition that made machines that would give a compatible experience at different price points (Zeos, Dell, Gateway 2000, etc.). As a result, Windows became the dominant player in the desktop operating system war. Macintosh, on the other hand, became a boutique operating system for people who felt passionately about this particular OS, equaling about 5% of the desktop computer market (versus Microsoft's 90% market share). Apple wanted dominance in the desktop computer market (and still do), they just didn’t get it. By the way, IBM is still a profitable company, but they are largely irrelevant in the PC industry they created.

The reason most people use Windows, though, isn’t because they feel wild about the operating system or because they feel that it’s superior or even because it gives them status. It’s because the programs they want to use and the resulting data files they make from those programs work on Windows, and Windows machines can be had at cheaper prices than Apples. People don’t use Windows to run Windows. They use Windows to run Office, Firefox, World of Warcraft, etc. on an affordable machine. By the way, Microsoft didn’t come first, either. Apple did. Apple had more money, more market share, and more momentum, and Microsoft ate their lunch. Now that sounds familiar.

The Android operating system is still in its infancy and only now beginning to reach quality parity (in hardware and software) with the iPhone’s functionality and app offering. Developers know that today, the iPhone represents the fastest revenue stream and return on programming investment. The iPhone market is more mature, which means to succeed in that market will require more investment in a polished app because there’s plenty of competition in the iTunes marketplace. I have no problem saying that the iPhone is today’s king. But the king is dying, and by my watch I’d wager he has about 18 months of dominance before iOS says “ad-iOS” to the majority of the market. App developers ignore Android at their peril, and they know it. Android offers choices, and the market repeatedly shows that it prefers many options over a single option. While navigating the smartphone market, many roads lead to Android—you choose your carrier, your handset—you're in the driver's seat. In the land of Apple, you have one ride, and Steve Jobs is behind the wheel.

Cage Fight, Part 2: Why Apple Will Win The Smartphone War