Our friendly neighborhood FedEx employee stopped by this morning with our Samsung Captivate, so I figured I’d do a quick unboxing video, snap some pictures, and give you guys our initial thoughts before our review in a couple days. 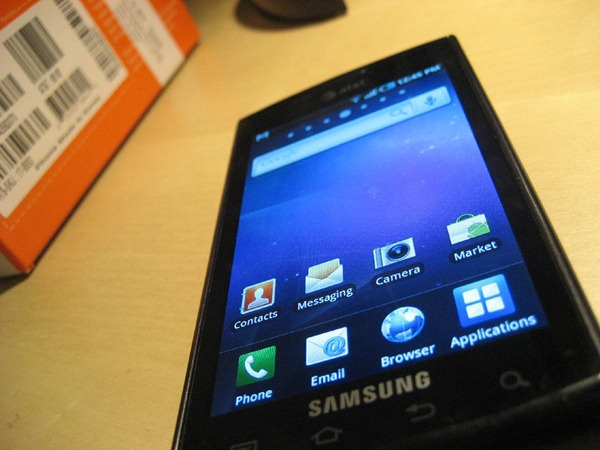 The box itself is fairly boring, sticking with a generic “You bought a cell phone on AT&T!” design rather than trying to shake things up a la the EVO 4G’s eco-friendly box design, or Apple’s sleek iPhone packaging. Still, though, it’s what’s inside that counts, right?

Sliding the top off reveals a ‘quick start’ guide under which lies the phone itself, and below that, the charger, USB cable, and an above average set of ear buds. The phone is surprisingly light, even with the battery; as you’ll see in the video, I was under the impression that the battery had not been installed yet. It definitely has a very plastic-y feel, though I’m not sure I’d say it feels ‘cheap’ – it’s solid enough that I’d feel comfortable dropping it in my pocket, though I’d definitely want to get a protective case on there just to be safe.

The screen size is perfect. At 4” it sits pretty much dead even between the Nexus One’s 3.7” screen and the EVO 4G and Droid X’s 4.3” screens. The phone feels very good in-hand, not too big that it’s uncomfortable, and not too small that you feel it’s going to slip through your fingers.

Of course Samsung has also been very vocal about the Super AMOLED screen the device packs – they feel that it’s superior to the Retina display found on the iPhone 4, despite it being a lower resolution (480x800 vs Apple’s 960x640)

I don’t have an iPhone 4 with me to do a side by side, but there’s no doubt that the display on the Captivate is gorgeous. It’s crisp and bright, and really makes the display on my Nexus One seem dated. I’m hoping that they’ve found away to prevent ‘burn-in’ with the Super AMOLED display – there’s a clear shadow of where my notification bar sits on my Nexus One when it’s in landscape mode(I’m considering making a post focusing on this issue..it’s quite annoying).

I’m going to cut this short so I don’t spoil my review – stay tuned for our complete, detailed run down of the phone coming out in the next few days!