Acer’s new beTouch E130 has passed the FCC. Check this thing out – it looks like they just slapped together some hardware they had left over in the 2005 parts bin, and the specs aren’t much better: 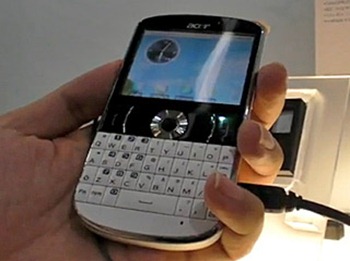 I have no idea what Acer is shooting for with this phone. We’ve seen budget Android phones before - such as Sprint’s Intercept and Verizon’s WX445 – and this thing looks be crap even compared to those. No word yet on where it’s headed – it may not be coming to America (or Europe, for that matter).

Google May Be Investing In Company Behind Farmville, Android May Be Getting A Whole Lot More ...