If you've been trying to get your hands on the HTC Droid Incredible ever since it launched and you didn't reserve one in a preorder, you may have had some trouble finding one in stock. In fact, even some later preorders have not been filled yet.

The phone is still sold out everywhere, including VZW, with ship dates going as far as August:

The situation with the Droid Incredible, caused by shortages of AMOLED screens, got so bad that Verizon actually allowed customers to switch their preorders to Droid X instead.

One of Droid-Life.com readers noticed today that Amazon's availability just went from backordered to "ships in 24 hours". Indeed, when we checked it a few minutes ago, it was still available, for $149.99: 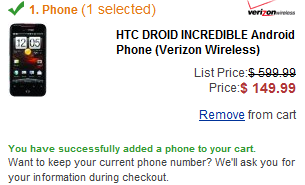 Did Amazon get a bunch of Incredibles in stock? Is this a bait or a mistake?

There is only one way to find out: order one and see if it ships.