It may not seem like it at first, but gaming on Android is pathetic. While Android certainly has its fair share of good games, there is a long way to go before the state of gaming on the platform can be considered healthy. There are probably a few people up in arms over that statement, so let me qualify it:

A few days ago I wrote an article on a Distimo report comparing various app markets. One of the juicy bits of info from the report (that I didn’t cover in my article) was that precisely 0 of the top ten free apps and 0 of the top ten paid apps on Android are games. I don’t think you can sanely make an argument that gaming on Android is healthy when there are no games on the top 10 free or top 10 paid apps.

Compare this to the top apps for iPhone:

That’s right: while 0/10 paid and 0/10 free apps for Android are games, 8/10 paid and 9/10 free apps for the iPhone are. Another dead giveaway that the situation is bad? The Android Marketplace is the only app market that has two sets of charts – one set for all apps, and one set for games, while all other marketplaces have just one set (for all apps). As if that weren’t bad enough, the top 10 free games for Android are mostly generic: 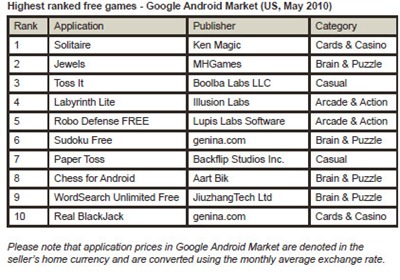 That said, good news is on the horizon: OpenFeint, an SDK that allows game developers to add social networking to their games, is coming to Android. Today, the service has over 28 million users, 9,200 developers, over 2,200 games. 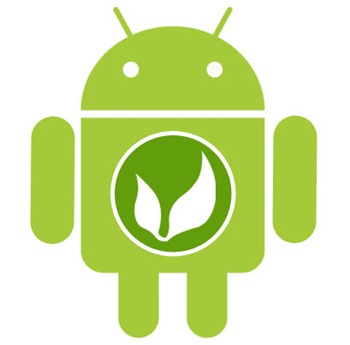 While OpenFeint joining the rabble may not be the solution, it’s certainly a big step in the right direction – and at this point, every bit helps.

With a strong set of partners at launch, OpenFeint's ecosystem provides Android users the most compelling way to discover and buy high quality online games. In addition to incorporating Google Checkout and leading community features into its developer SDK, OpenFeint will extend its wildly successful Game Spotlight discovery app to Android. Interested parties can register atwww.openfeint.com/developers/android for details as they emerge.

At the same time, OpenFeint continues to invest in and expand its efforts on Apple’s iOS devices and maintains the largest mobile social gaming ecosystem on that platform with over 28 million users and a presence in over 2,200 live games.

"OpenFeint is leading the charge for game developers on Android - helping to simplify and improve the game discovery and purchase process for players on the platform,” said Adam Flanders, General Manager of Glu, a leading global developer and publisher of smartphone games. “Android is an evolving gaming platform that will greatly benefit from OpenFeint's innovative online gaming and community technologies and we are pleased to extend our partnership.”

OpenFeint also announced that its expansion to Android is backed by a recent strategic investment by leading Chinese online gaming company, The9. This marks the path for a significant expansion for the company as it rolls out its cross platform strategy. As always, OpenFeint will remain open source and free for both developers and players.

"OpenFeint continues to demonstrate leadership and innovation in building community technologies which drive considerable discovery and monetization for publishers,” said Jason Loia, COO of Digital Chocolate, one of the industry’s most highly-rated publishers of mobile and social games. “We are excited about their entry into the Android ecosystem and we look forward to partnering with them to bring the best gaming experience to the Android platform.”

"This is a big step for OpenFeint and an even bigger step for Android as it becomes a serious mobile gaming platform," said Jonathan Goldberg, Analyst at Deutsche Bank Equity Research. “OpenFeint ushered in mobile online gaming for iOS devices and we think they’ll lead the revolution on Android."

OpenFeint also re-affirmed its continued commitment to the Apple iOS device community where thousands of games are in development and several games are approved in the App Store daily with OpenFeint enablement.

"The explosion in mobile online gaming is a phenomenon that affects all members of the mobile ecosystem - from OS developers and OEMs to game developers and players," said Peter Relan, Executive Chairman of Aurora Feint. "Online games are meant to be played with all of your friends - regardless of mobile operating system. We've decided to expand to Android with these mobile gaming giants because all smartphone owners deserve high quality, easy to find games."

Google and Android are trademarks of Google Inc. Use of these trademarks is subject to Google Permissions.

Apple and iOS are registered trademarks of Apple, Inc.