T-Mobile may not have the most impressive Android line-up compared to the other major carriers, but there’s no doubt they’ve invested a lot into the platform – after all, they were the first to bring us Android with the G1. Their investment in Android shows no signs of slowing down, as a leaked T-Mobile roadmap shows us that the carrier is planning on launching a total of seven more Android devices this year.

As we’ve already known, the Samsung Vibrant and Motorola Charm are going to be released this July (the leak points to a July 21 release for both, but that may not be true anymore), possible updates for the Motorola Cliq and Cliq XT in August, and the release of the HTC “Vanguard” as well as an update for the Charm in September. The biggest month is November, which shows the release of two Android devices from Motorola (their names are too blurry to make out), an LG device, as well as the release of the HTC “Emerald”. No doubt this has something to do with the rumored “Project Emerald”, but we’ll have to wait to see what it turns out to be.

But the information here probably shouldn’t be taken at face value. Though it certainly looks official, the information could be very outdated; it gives the myTouch Slide’s release date as “TBA July”, while it was actually launched on June 2. Release dates may have changed dramatically since this was first drawn up, so don’t expect the HTC Emerald’s release date of November 5 to be set in stone, as this is far from confirmed. 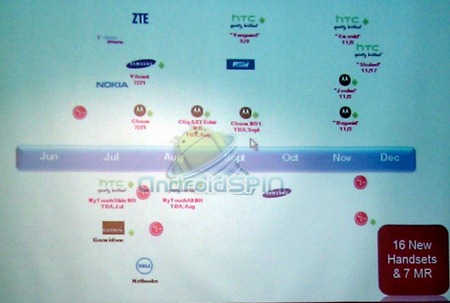 The Sorry State Of Gaming On Android, And How OpenFeint May Help