The love-child of HTC’s Passion and Verizon’s Droid moniker (please don’t sue us LucasFilms) is  beginning to feel more like a red-headed stepchild than a flagship device. Per Verizon’s website, new orders placed for the Droid Incredible won’t ship until August 3rd. While this is most likely for the same reason as previous delays (Shortage of Samsung AMOLED displays), Verizon previously claimed that demand would be “satisfied” some time in July. 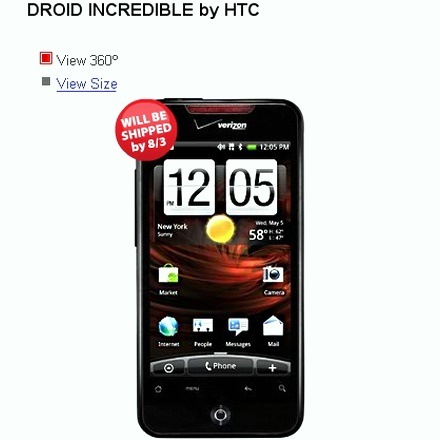 This new setback indicates either that demand for the Incredible is continuing to exceed capacity, or that Verizon and HTC have faced a new, unannounced setback. Unfortunately, neither bodes well for those still waiting for their devices.

The former seems highly unlikely given the Droid X’s popularity. If demand for the Incredible continues to remain high, or even increase, it would place the phone in direct competition with Motorola's Droid X. Given Verizon's decision to allow customers with back-ordered Incredibles to switch to the Droid X, HTC would be taking a huge risk in increasing production of the device when it is clear Verizon has chosen their flagship handset. It would be an unwinnable battle, and one which would steal thunder from Verizon and Motorola’s “real” Droid-line phones.

Far more likely, Samsung’s AMOLED manufacturing capacity has shifted to cover demand for its own very popular Galaxy S, which sports an S-AMOLED screen. Given that Samsung and HTC are now competing in the same market-niche due to the release of the Galaxy S, it certainly is possible Samsung has started playing hardball with their mobile handset manufacturing neighbor to the South. If Samsung has slowed shipment of its AMOLED displays to a trickle, HTC may be forced to discontinue the Incredible sooner than expected, and Verizon may continue experiencing (possibly indefinite) delays.

This is all, of course, speculation.

What do you think? Is Verizon covering their assets, or are HTC and Samsung locked in an epic AMOLED battle? Let us know your thoughts below.