A notification about the new version of Yelp just popped up on my EVO, and without thinking much about it, I gave it a whirl. Ohh, version 2.0 - it must be bringing new features, I thought. Indeed, it was. And I'm in love with them. 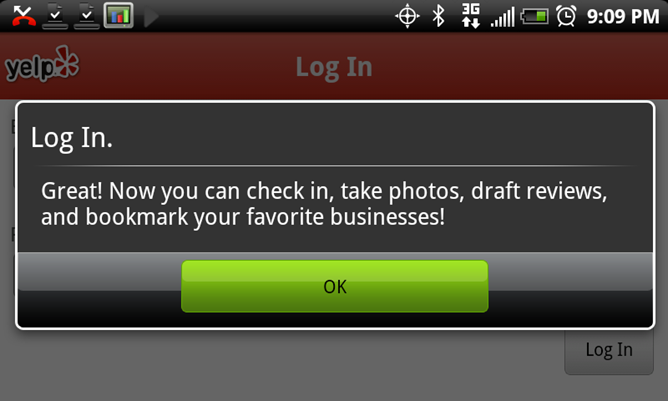 As you can see the last part mentions force closes which happened to me when I didn't have a GPS signal, but once you see the new features, I'm sure you will forgive Yelp developers for the time being, until they roll out some fixes.

So let's explore some of these new features in more detail.

I had a hunch of what this new "Monocle" feature was going to be but my heart skipped a beat once I confirmed my suspicion.

What we have here, ladies and gentlemen, is Yelp's version of augmented reality (apologies for slightly jerky pictures - no screenshot taking software is good enough to take in so much data so fast when the screen is shaky due to both GPS signal and my hands after a beer).

You may have seen Layar or Google Goggles, but Yelp really brings it to a whole new level.

Let me point out 3 things: 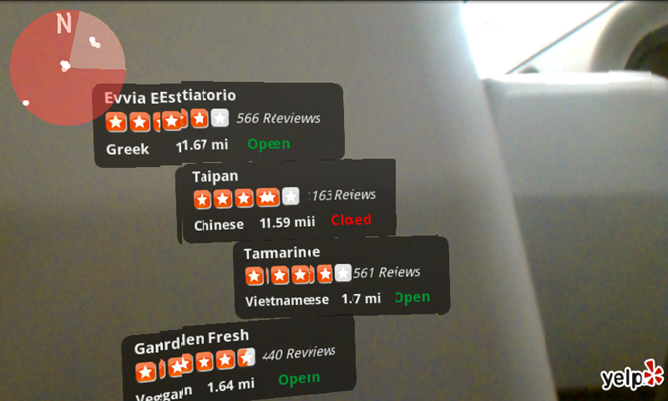 To me, this is the first augmented reality application that is finally worthy of permanently occupying space on my phone.

Click on a business and it brings you to a revamped Business Info page. "Monocle" is exactly what the doctor prescribed.

New Look For Business Info Pages And All Around

The whole application has been given a facelift, including the main menu. Additional buttons that I will expand on below were added. 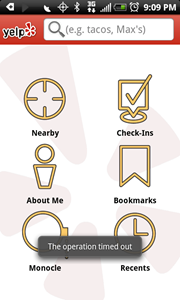 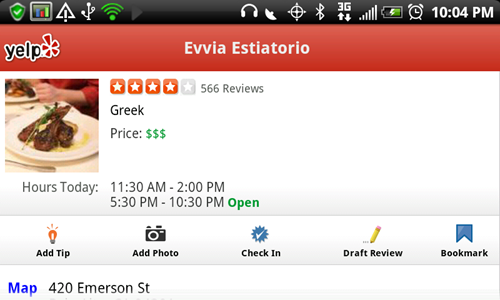 In order to compete with FourSquare and Gowalla, Yelp recently introduced mobile check-ins. As of today, you can check in from within the Android app. 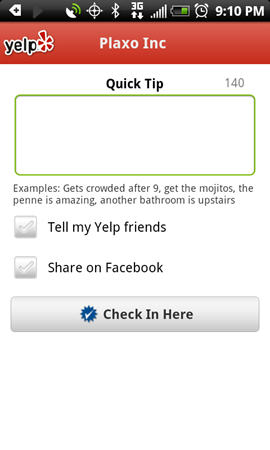 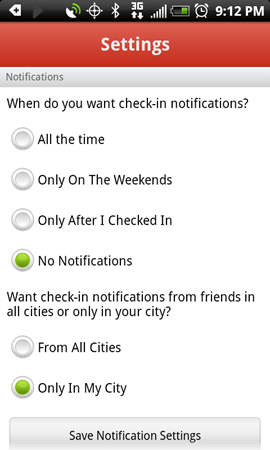 2 weeks later, they added an ability to log in which allowed viewing favorites, but still didn't provide any reviewing capabilities.

Well, with v2.0, I am here to tell you that you can now post reviews. Well, kind of. You can post drafts, which need to be saved to be posted live later from yelp.com.

I'm guessing there was a good reason Yelp did it this way for now, and I'm sure the next update will bring full posting functionality. 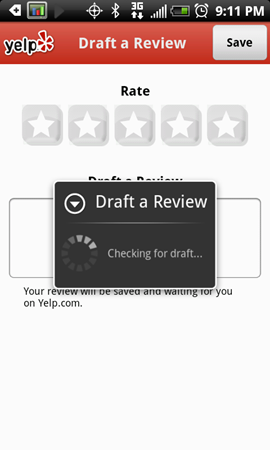 Want a fast way to see if the place you're checking out is a downer or makes the best soufflé? You can view review highlights and quick tips from other users at a glance using the new interface (at least I don't remember seeing this before). 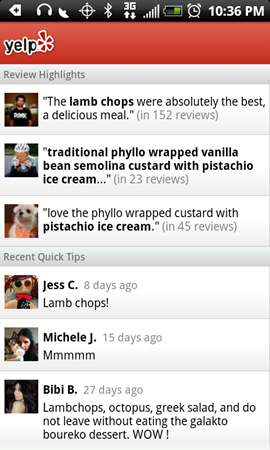 This release also brought a whole bag of bugs, though I suspect they only show up when you don't have GPS signal. Yelp, you're planning to fix these, right? 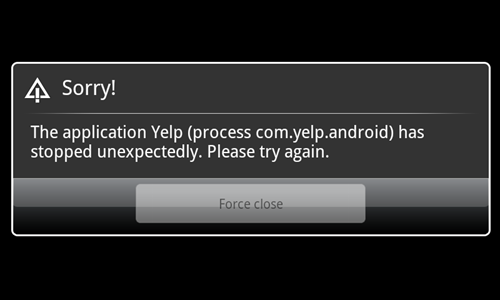 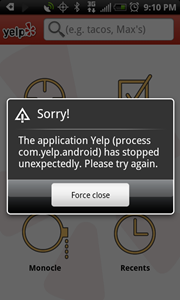 Overall, this is a very solid release for Yelp. "Monocle" will probably change the way I find food (Layar and Goggles just didn't do it well enough), and being able to finally record reviews will mean that I use the Yelp app a lot more frequently.

What did you think about v2.0? Drop your 2 cents in the comment box below.

Speaking of food, dinner is waiting. Time to fire up the Yelp app and find me a Korean barbeque.