Though yesterday’s OTA update for the HTC EVO ended abruptly when it was reported that some EVOs were being bricked, it seems that it is now being rolled out once more. The update is a little larger than yesterday’s (30MB vs 23MB), but it seems nothing else has been changed (with the exception of phones not being bricked.)

Just like those who successfully received the update yesterday, users receiving the update today are reporting better battery lives, improved Exchange Active Sync, and, more noticeably, much improved Wi-Fi signal strength. Of course, it still does not fix the 30 fps on the phone, and it will break unrevoked root (for now). 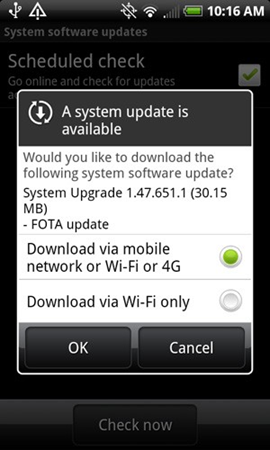 Note: if you've already applied the previous update successfully, you do not need to worry about this one and shouldn't get a notification to update.

Have you received the update and noticed any substantial changes? Noticed any problems? Tell us in the comments!

The Comeback: HTC EVO 4G VS iPhone 4 Parody Video, This Time From Apple's Side (Battery Jokes - ...