Earlier today, an employee posted on Sprint’s blog saying that the EVO will be getting Android 2.2 soon. When asked if the update would go out to Hero and Moment users as well, his reply was:

No, it will not. 2.2 will not be available for HTC Hero or Samsung Moment

Shortly after, Sprint sent out an official tweet confirming: 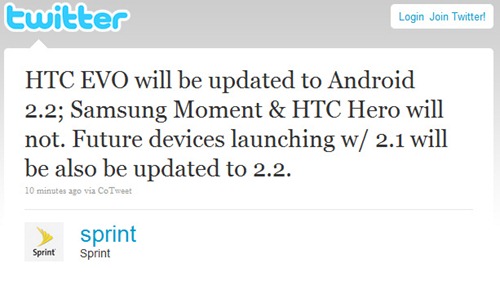 Buzzkill. The majority of the remainder of the posts are people who are pissed off that Sprint is more or less abandoning them. However, Sprint is limited by the same constraints as the rest of the world - with the number of new phones coming out at a steady pace, and the limited resources available to create and push out the upgrades, and you have to realize that some phones are going to get left out in the dark.

Still, as an EVO owner, I know I’ll be pissed when Sprint kicks the EVO to the curb. Oh, wait, I’m rooted. Nevermind.

Update: I typo'ed in the title - fixed now! It originally read "Will Get FroYo." Sorry!

SimpleRoot - Fully Root Your HTC EVO 4G In One Click, Including Unlocking NAND And Flashing ...