As if the EVO and Incredible weren’t already great phones, it turns out both are capable of 802.11n.

An FCC filing by HTC was posted a few days ago, revealing that the Droid Incredible packs a chip that supports 802.11n, though currently not supported by the OS itself. Speculation around the interwebs is that it means such support will be added in a future update from HTC. I’m slightly less convinced of this than the rest of the blogger-army, but more on that in a minute. Regardless, the Android-hacking community already came up with a way to enable 802.11n on the Incredible.

Rooted EVO users can follow the steps on the XDA-Devs forums, posted by user chuckhriczko. To those opposed to having to use shell and a hex editor in order to enable it, you can also flash a zip file (hosted on Chuck H’s blog), courtesy of Calkulin (for the record, the EVO screencap below is his). For those who haven’t rooted their phones, your story is the same as the Incredible – HTC may enable it in a future update, but I’m not convinced. 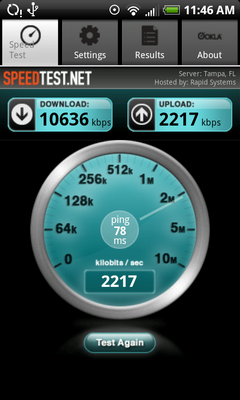 Initially, it seems like a no-brainer that HTC would enable –N in a future update. But maybe they won’t – as Chuck H pointed out in his blog article on enabling –N on the EVO, they may have left it off because battery life already pretty much sucks.

Personally, I’m torn between my 2 main (conflicting) beliefs - “let the user decide” and “people are stupid.” I like to have all the options laid out in front of me and then make an intelligent decision on which tools to use, and when. At the same time, being the tech guy everyone calls with tech problems, I can attest to the fact that most people just don’t “get it” when it comes to technology, and HTC has to protect itself from these users.